The ocean has always fascinated me. It is a big, scary and extremely intimidating place to which I am completely unfamiliar. Growing up, my family traveled to the Oregon coast in the summers and I’d stand on the beach at the frigid water’s edge to marvel at the waves rolling in and crashing into the sand.

In contrast, on Kamilo Beach on Hawai‘i Island, the ocean’s currents are washing up seemingly never-ending plastic every day. Kamilo in Hawaiian literally means the twisting or swirling currents. In ancient times, the beach was a place where the Native Hawaiians found large logs washed ashore to carve canoes. Today, the beach has earned the nickname of “trash beach” for its accumulation of plastic marine debris from the Great Pacific Garbage Patch. 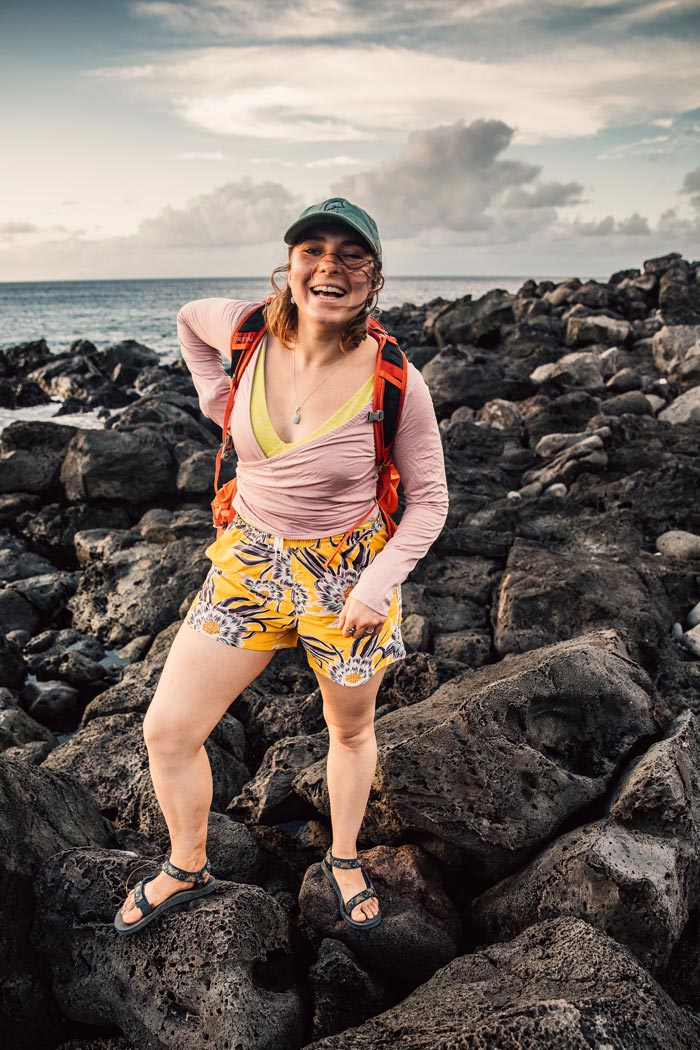 This is where I met up with Mariah Reading, an eco-artist who works as a park ranger during the summer and spends her free time painting landscapes on the trash that she’s found in different landscapes. “I have never been to a place where the trash was so unrecognizable,” she says of our time at Kamilo Beach. “There were little bits of plastic objects with past lives, embedded and blended in with the sand and the coral.”

As we surveyed the debris—household products, fishing nets, fishing ropes, and small plastic pieces that have broken off from bigger items—Mariah shared with me an analogy I hadn’t heard before. Visualize a bathtub filling up with water. The faucet is running full steam and eventually, the tub begins to fill up until it’s overflowing. Do you get a bowl and scoop it up, or do you turn off the faucet? 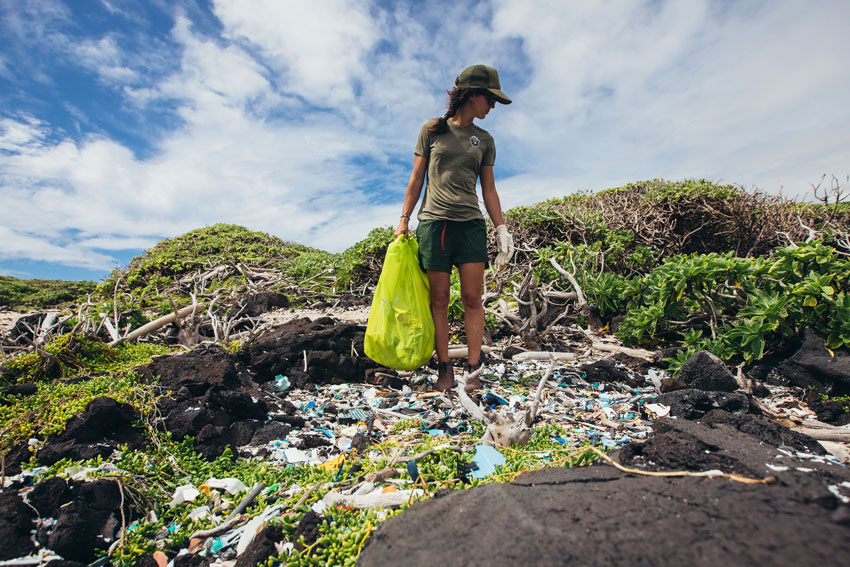 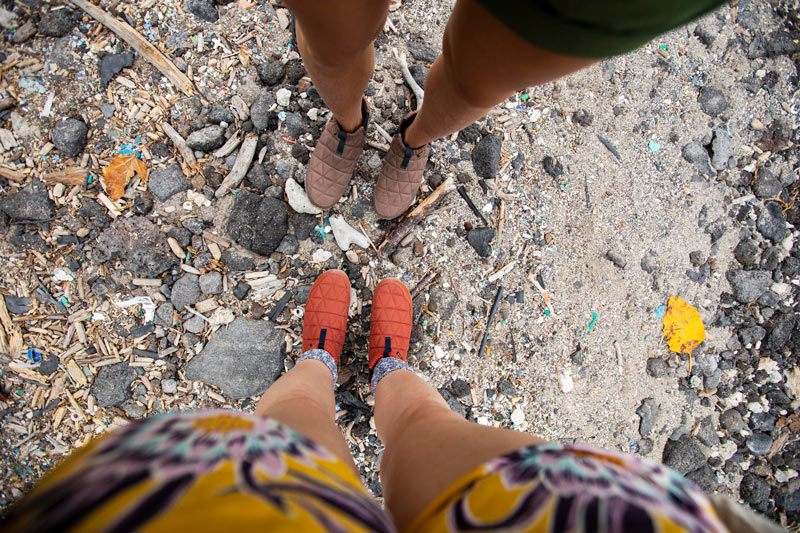 That certainly got my gears turning. It feels like we’re just scooping out buckets of water by making small changes and doing cleanups, but it takes time, patience and a seriously dedicated attitude to break habits and change behaviors. The world won’t change overnight to simply turn off the faucet. So what can we do?

We keep trying. In that spirit, we joined Hawaii Wildlife Fund, a community-based organization that hosts cleanup efforts at Kamilo Beach. Since 2003, they have removed over 285 tons of fishing nets and other marine debris. What once began as 8-10-feet high piles of debris in some places has now been reduced to a 1,500-foot-long beach with more microplastics than sand. In a single day’s work, we were able to remove 200 pounds of rubbish. The garbage accumulated on Kamilo consists of 90% plastic. 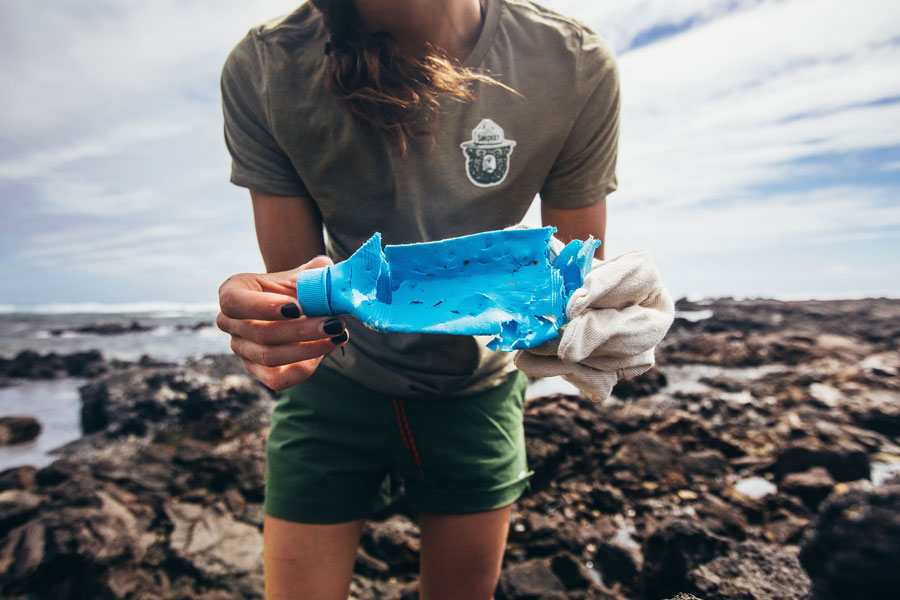 “The marine debris not only affects the land but the wildlife as well. Seen here, marine life often bites off pieces of plastic when mistaken for food.”

Mariah’s art centers around raising awareness about the human impact on the planet and the interaction between the two. Since we last spoke in Alaska, she’s completed an art residency in Denali, then Zion National Park, and worked in Big Sur for California State Parks. She most recently exhibited her paintings at the Kahilu Theater on the Big Island which included a stunning collection of trash that she’s painted in different parks, from a hubcap at the famously picturesque Big Sur coastal highway to a single swim fin at Channel Islands National Park. 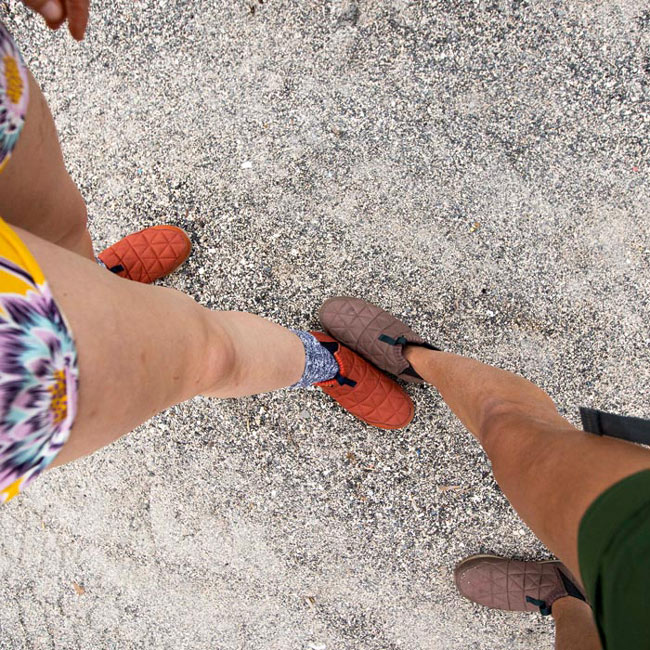 I caught up with her to talk more about what she’s learned from people’s trash along the way, her favorite type of trash to discover and why she hopes her art inspires environmental activism.

What have you learned from people’s trash in different locations? What does our trash say about us?

Tell us about your experience at Kamilo Point. Was it what you expected?

MARIAH: It was very impactful to see all of the micro trash washed up on the coast. Most of what I find on land and in and around the ocean is plastic. It blew my mind to see the microplastics along Kamilo Point blended in with the natural environment around it. Plastic has become such a problem that it is part of everything else now, within all of us.

Marine debris can especially go unnoticed for those who don’t live by the beach, but the ocean is where so much of our debris ends up living. Sea life in the deepest trenches of the ocean has traces of plastic in them and the Great Pacific Garbage Patch is twice the size of Texas, but if we are not confronted with those images every day, we can push them out of our consciousness. By painting on marine debris, and framing it within a landscape that has evident traces of microplastics, my hope is that viewers [of my art] cannot help but snap out of complacency. 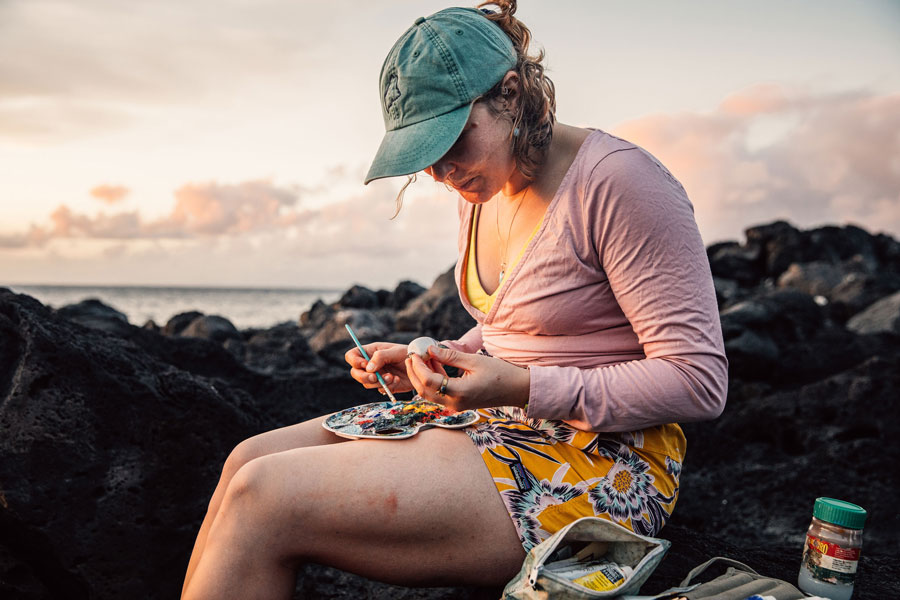 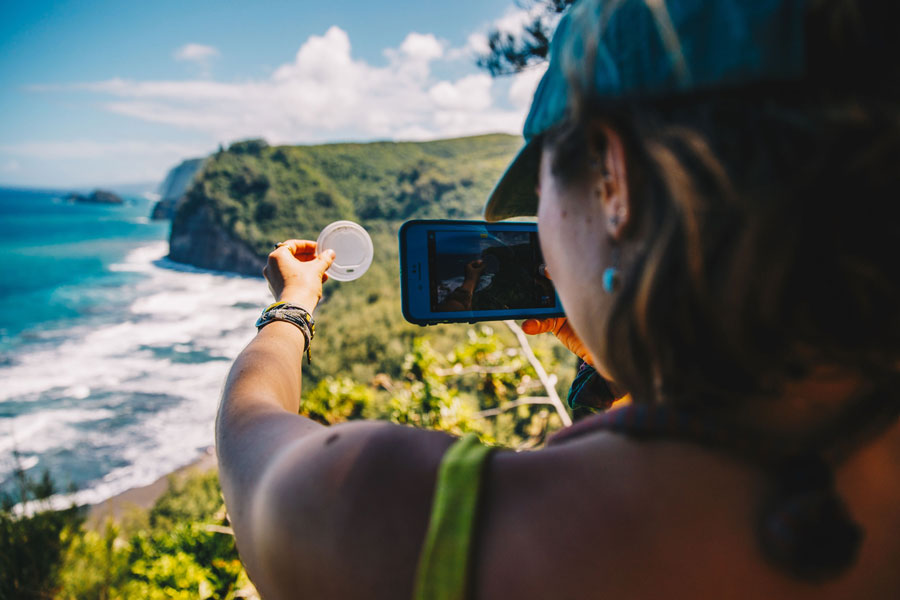 Mariah photographs a coffee cup lid that will soon be painted into a work of art and tool for education about single-use plastic waste. 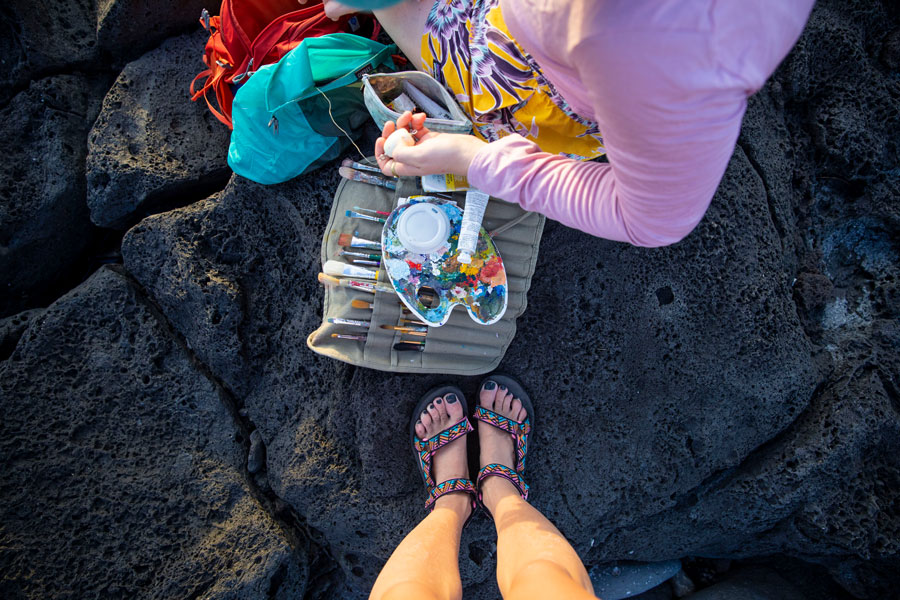 What is your favorite piece of rubbish to find and why?

MARIAH: Every piece is new and unique! I never know what I’m going to come across which makes each painting exciting. I have especially enjoyed painting on shoes because they directly depict our human footprint on this earth.

How does our human footprint on land relate to the sea?

MARIAH: Most of what we do on land finds its way to the ocean. The mountaineering waste thrown into crevasses from expeditions 50 years ago is now melting out into rivers and traveling directly into the ocean. The actions I’m taking in interior Alaska—miles and miles away from the ocean—are directly leading to the sea.

Further, with more and more fires happening all around the country and leading to mudslides, the lives we lead on land are actually falling right into the ocean. With ocean levels rising, communities are disappearing into the sea too. Because of our actions on land, our oceans, 71% of our Earth, are suffering. 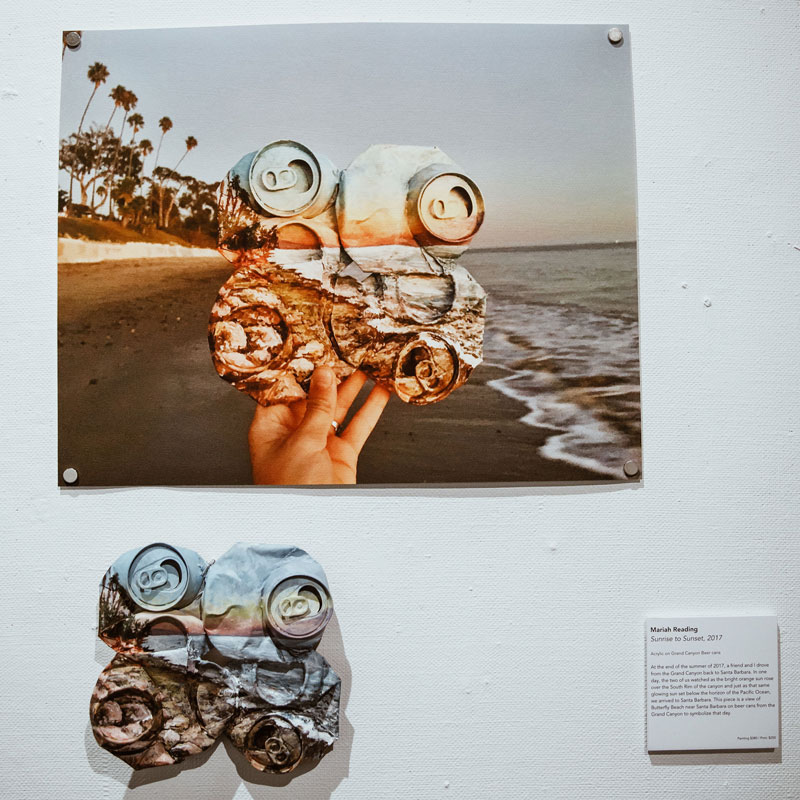 This piece is a view of Butterfly Beach near Santa Barbara, painted on beer cans that Mariah collected from the Grand Canyon. 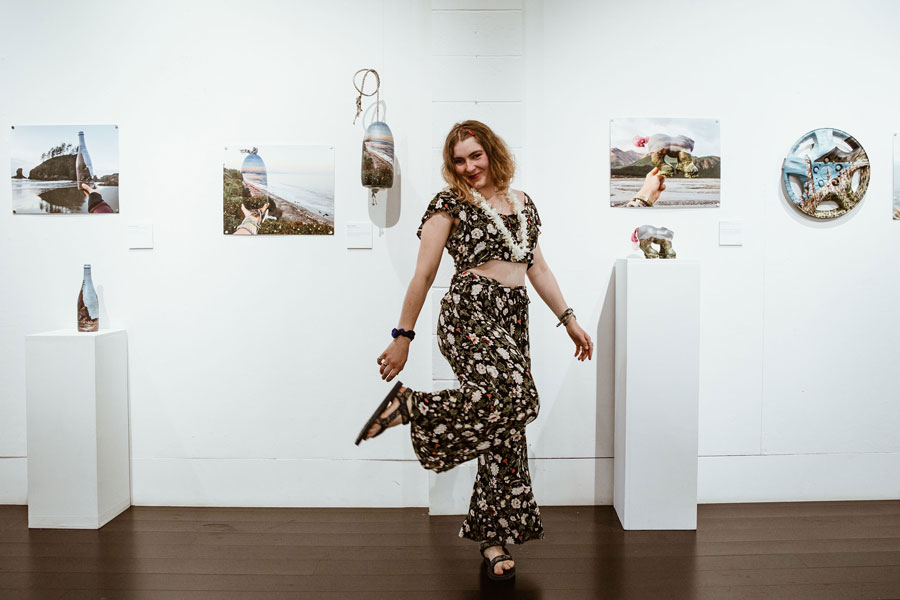 A collection of Mariah’s artworks were recently featured in a gallery exhibition at Kahilu Theatre in Hawaii.

How has your work with recycled art led you into environmental activism?

MARIAH: They’ve really just melded together. I realized as an artist I couldn’t continue my practice if I added to the problem. So I started to develop a limited waste art practice and have that trickle into my everyday life. I use the same recycled brush water for months, keep my paints wet for as long as possible by covering them, use a cloth washcloth (never paper), and keep all of my paintbrushes and paint tubes once they’ve been used up to turn into canvases later. My art influences my life and in turn, my life influences my art.

Did you ever anticipate that your art would become a force for environmental activism?

MARIAH: Wow, thanks for saying that! When I started, all I wanted was to focus on reducing my own footprint and cleaning up the landscapes that have so positively influenced my art. I never thought it would get any momentum, but it has meant the world to see others believing in my work and using the idea of it to create their own eco-friendly art and making the world a more beautiful place. 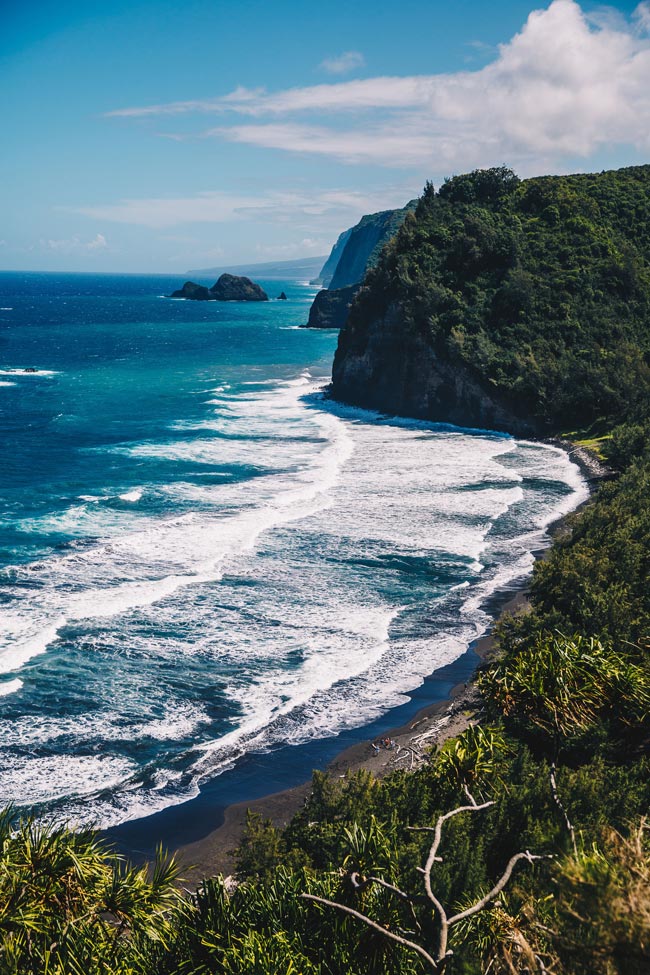 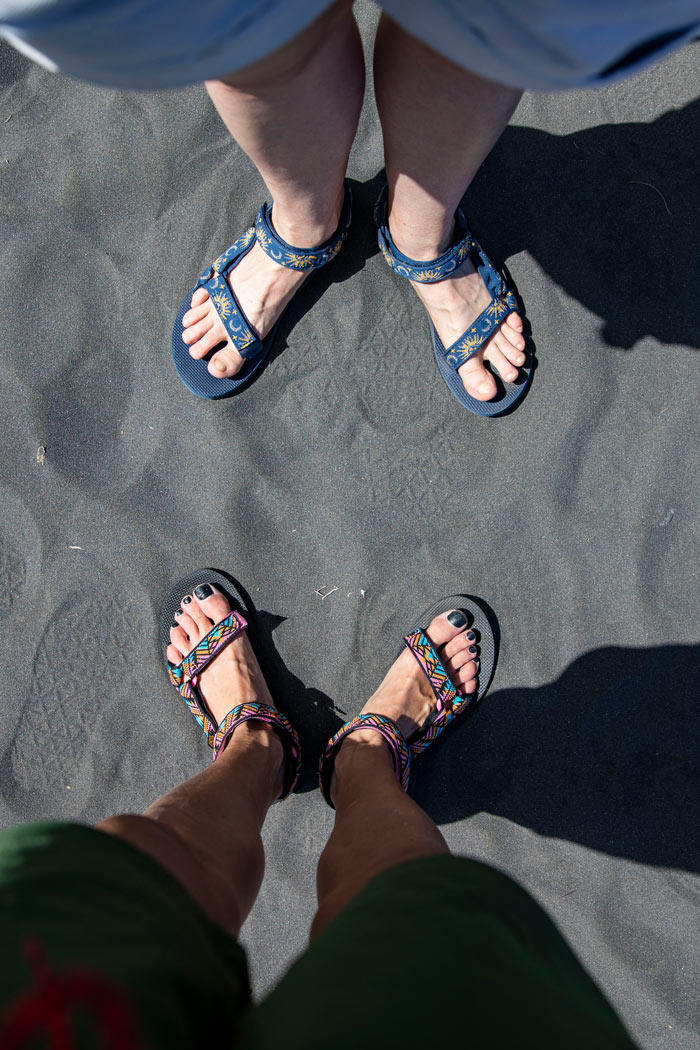 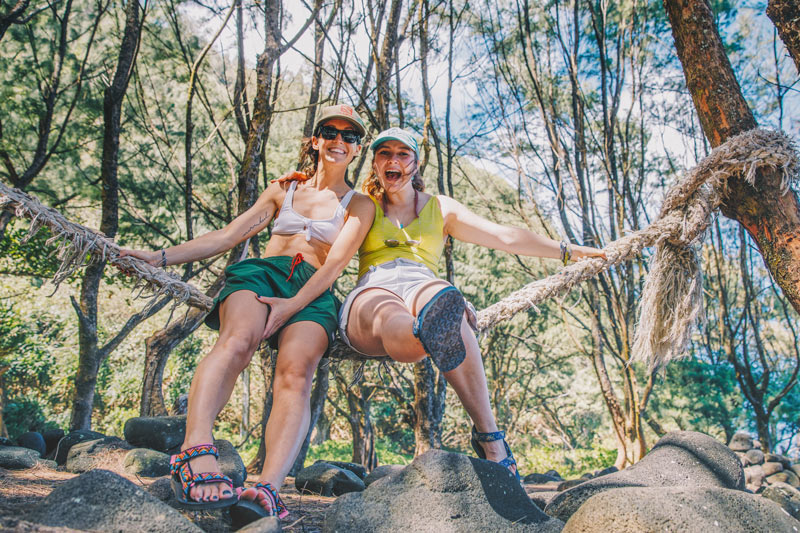 Shop the latest styles at Teva.com!