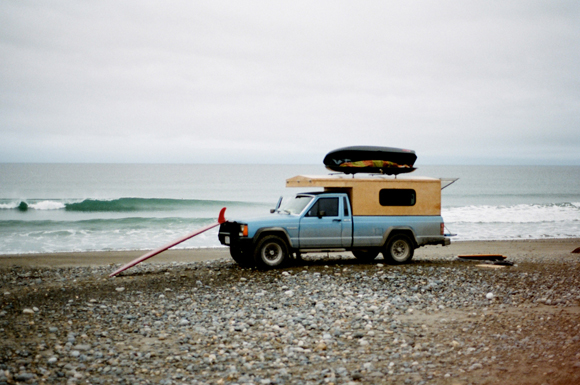 Cascadia’s Bigfoot Country has treated traveler and surfer Trevor Gordon, 23, to nothing but fun waves and pleasurable camping experiences. Aside from a few close calls, the gang journeys onward into new territory in “Escape from Bigfoot Country,”  the second installment of our two-part series following Gordon’s jaunt up north in his homemade camper. The trip may be ending, but it’s the first of many for Woody & the Blue Ox. Here, we catch up with Gordon to talk about learning to weld and what continues to make life on the road so good.

The video will premiere at 8am EST

What made you pull the trigger and trade in your VW Vanagon for a Jeep?

After deciding to move on from my VW van I was looking into a solid small-sized four-by-four truck. After some research, the Jeep Comanche was what I was looking for considering my intentions for the camper. I realized quickly that they where pretty hard to find and that the nearest well-maintained and low-mileage truck I could find was in Colorado. 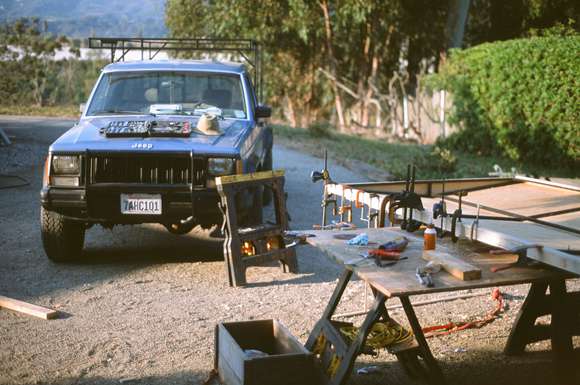 What skills did you need to acquire in order to build the camper?

Well, I learned how to weld and fiberglass especially for this project with the help of friends. I also learned how to be patient—I’ve found woodworkers are extremely patient people. Having to wait 24 hours for something to glue before you can move on to the next step is enough anticipation to pull my hair out, but I learned it pays off.

What upgrades didn’t go quite as planned?

For the most part everything went pretty smoothly. During the welding process I was doing some measuring of the truck’s bed and just figured it was a perfect rectangle and thus welded the frame that way only to later find out that the bed is an inch narrower in the back. I had to pop the welds, cut and re-weld the back section of the camper—that was probably the biggest setback. 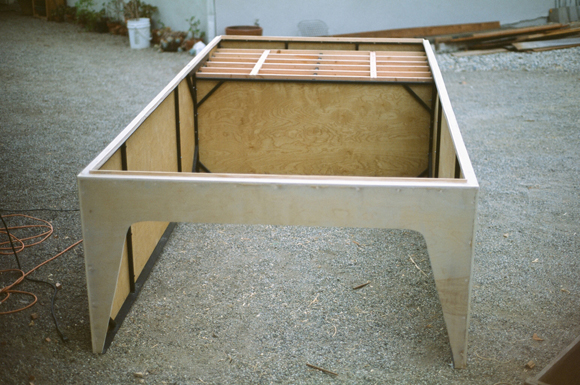 If you had to choose between the mountains and the ocean, which would it be?

I’ll always prefer the ocean. The mountains are astonishing and awe-inspiring, but only because they are not what I’m used to, and everything seems new to the eyes. But the ocean is where I’m most comfortable.

What do you keep your camper stocked with?

My sleeping bag and camping gear is always packed away. I keep a pellet gun and some canned food in there always, too. A little propane stove is installed in the cabinet for tea and coffee while at the beach or wherever. I have some fishing gear, too. 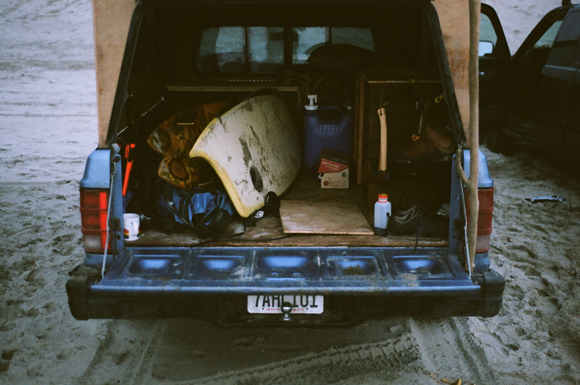 What is it about life on the road that keeps you stoked?

For me there is no better feeling than waking up somewhere new—that moment when you hop out of bed and even though you have to piss so bad, you take an extra couple of minutes to take in the colors or beauty of this new place. 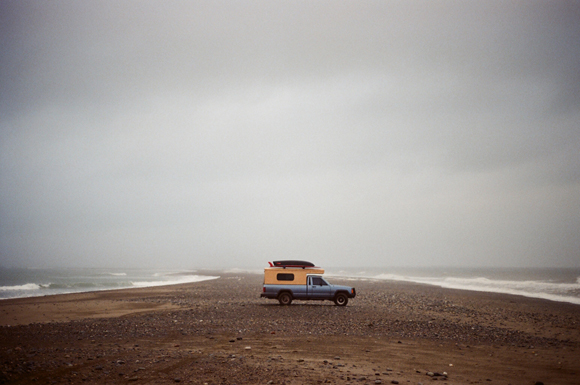 What are some adventures you’ve had that wouldn’t have been possible without your camper set up?

On the north end of Haida Gwaii Island there are waves way out on this spit and to get there , you needed a four-by-four car to get out through the deep sand, unless you walked for hours every day. The waves were super fun out there and we just set up camp on the beach. There is an epic spot up on one of the highest peaks in Big Sur that looks over the entire southern half of the coastline. The road is pretty beat up and rutted out from water and without the four-by-four pickup with the pretty low profile camper, it would be a difficult quick trip. More recently, and having grown up in the snowless land of southern California, when it does snow in the hills here we usually drive up and meet it as it comes in. It’s fun to head into the hills and find a spot to hang out and hike around and, come morning, that same area will have an inch or two of snow. Having the camper gives a nice slice of comfort to make a nice breakfast or meal in.

Watch the first video in our two part series on the Ember blog.

All photos by Jeremy Koreski.