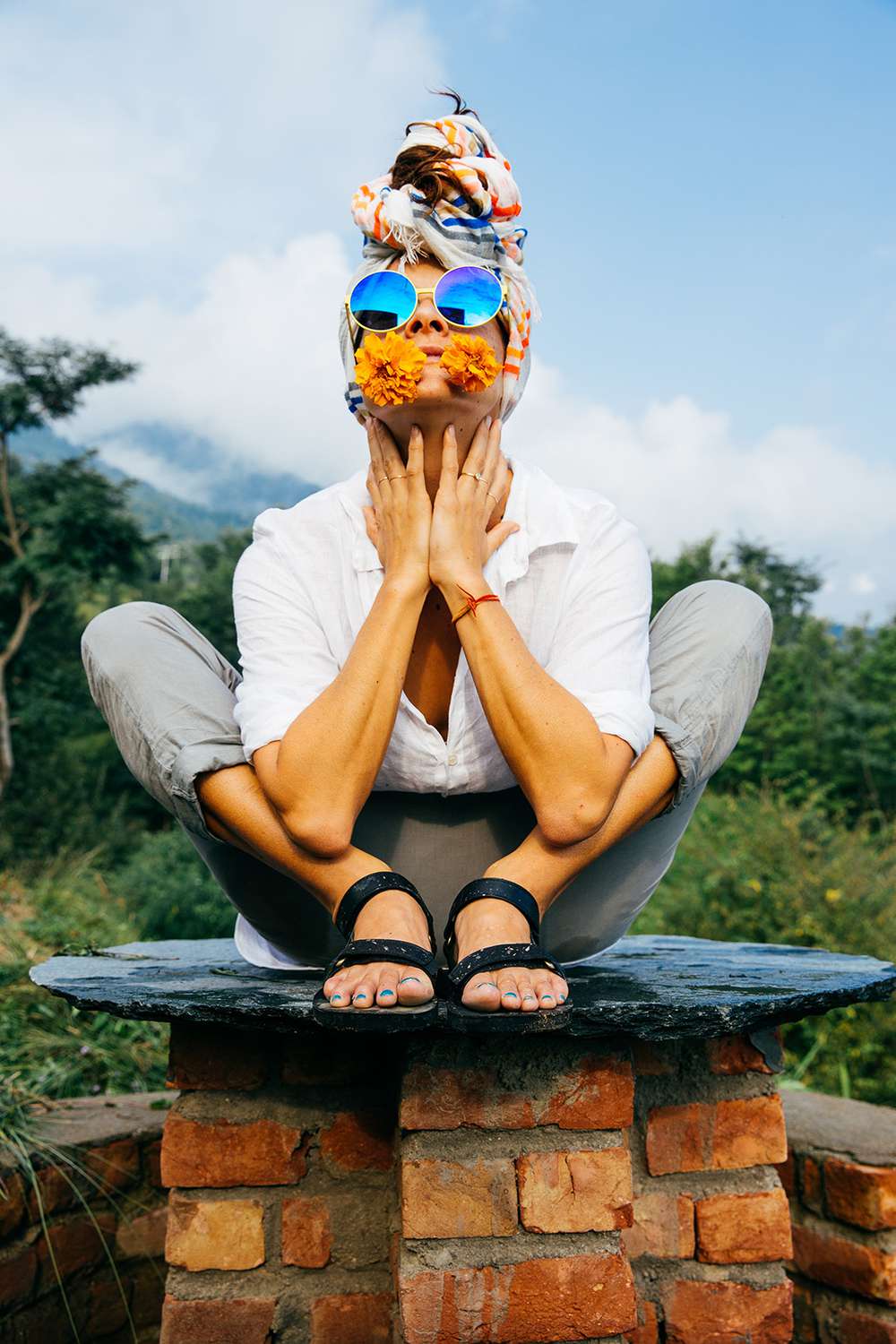 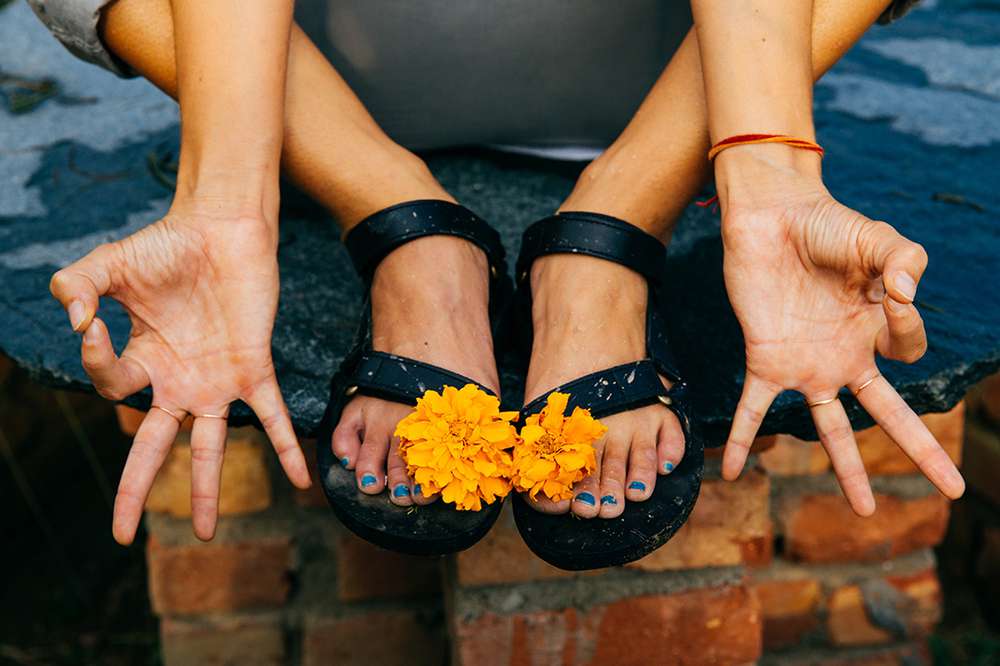 And it is not perfect. It’s overcrowded, chaotic, heavily polluted, and a completely different way of life than we’re used to. But in between the hectic streets and moments of culture shock, you’ll find a country deeply rooted in spirituality, tradition, and culture. It is alive. Somehow you find yourself in a balance between chaos and spirituality so unique you are left in a dreamy daze by the time you leave.

My friend Risa and I were headed to India for work and decided to make an adventure out of it. We spent three weeks exploring the Northern region going between New Delhi, Varanasi, Rishikesh, Dharamsala, and ending our trip in Jaipur.

Know The Culture Before You Go

Always do research before going to a country you are unfamiliar with.  Start to identify cultural dos and don’ts before your trip and prepare yourself for a little cultural shock. In India, don’t drink the water under any circumstances. Most Indians are vegetarian; cows are treated better than some humans. Haggling and the potential of getting conned are unavoidable, and lines are merely a suggestion that is rarely ever taken.

Most Indian women dress conservatively, so be sure to cover up. We always wore baggy clothing—no tank tops or shorts—and undergarments for any pieces that were a little more revealing. Be sure to bring a scarf for certain temples that require you to cover your head. 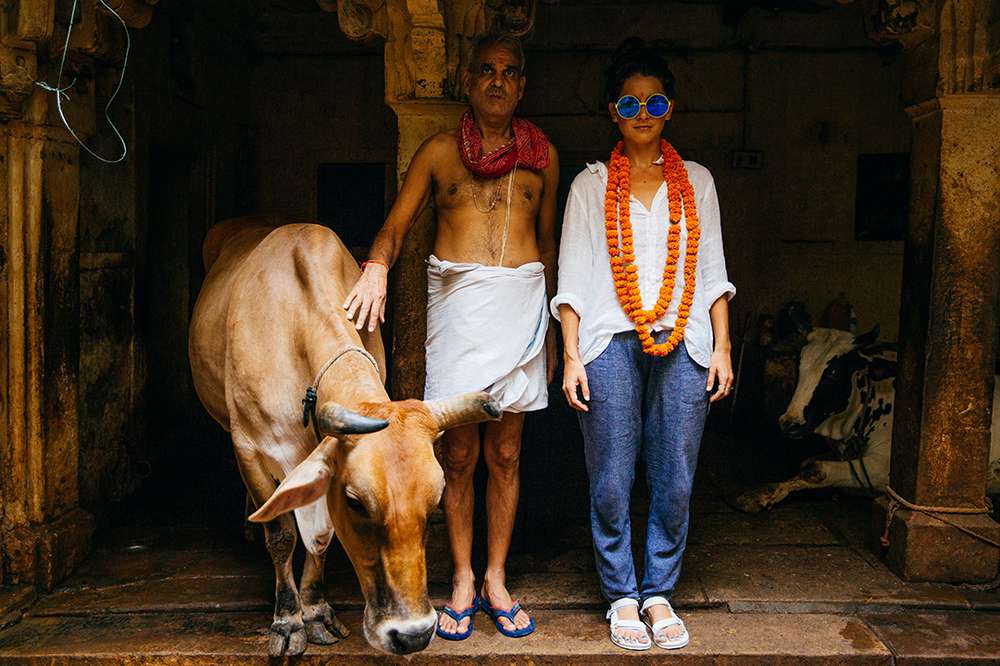 Everyone told us to wear covered shoes while we were in India but now that we’ve been, we realized they couldn’t have been more wrong! We made the most use out of our Original Universal Sandals and wore them everywhere. They were especially useful when we were entering and exiting temples (where you have to remove your shoes).  Believe it or not, my white Original Crafted Leather Sandals barely got dirty during our three-week trip!

We made the most use out of our boots in Dharamsala, where it was rainy and a little colder. I also loved using my Coromar Boots while traveling on planes, cars, and trains. They were so comfortable and easy to pack.

As a tourist, you may be overcharged for anything and everything, including taxis, entry fees, and goods. We usually asked our hotel or local friends how much we should be getting charged for certain things and talked down the price accordingly.

India has the largest concentration of people living below the World Bank’s international poverty line and more than 30 percent of children under five years old are malnourished. There isn’t much you can do as a foreigner during a single trip, so I encourage you to find a non-profit organization that you believe in and try to support them. I really like Beyond the Surface International because they are teaching young children (particularly in India) life skills through surfing and arts. 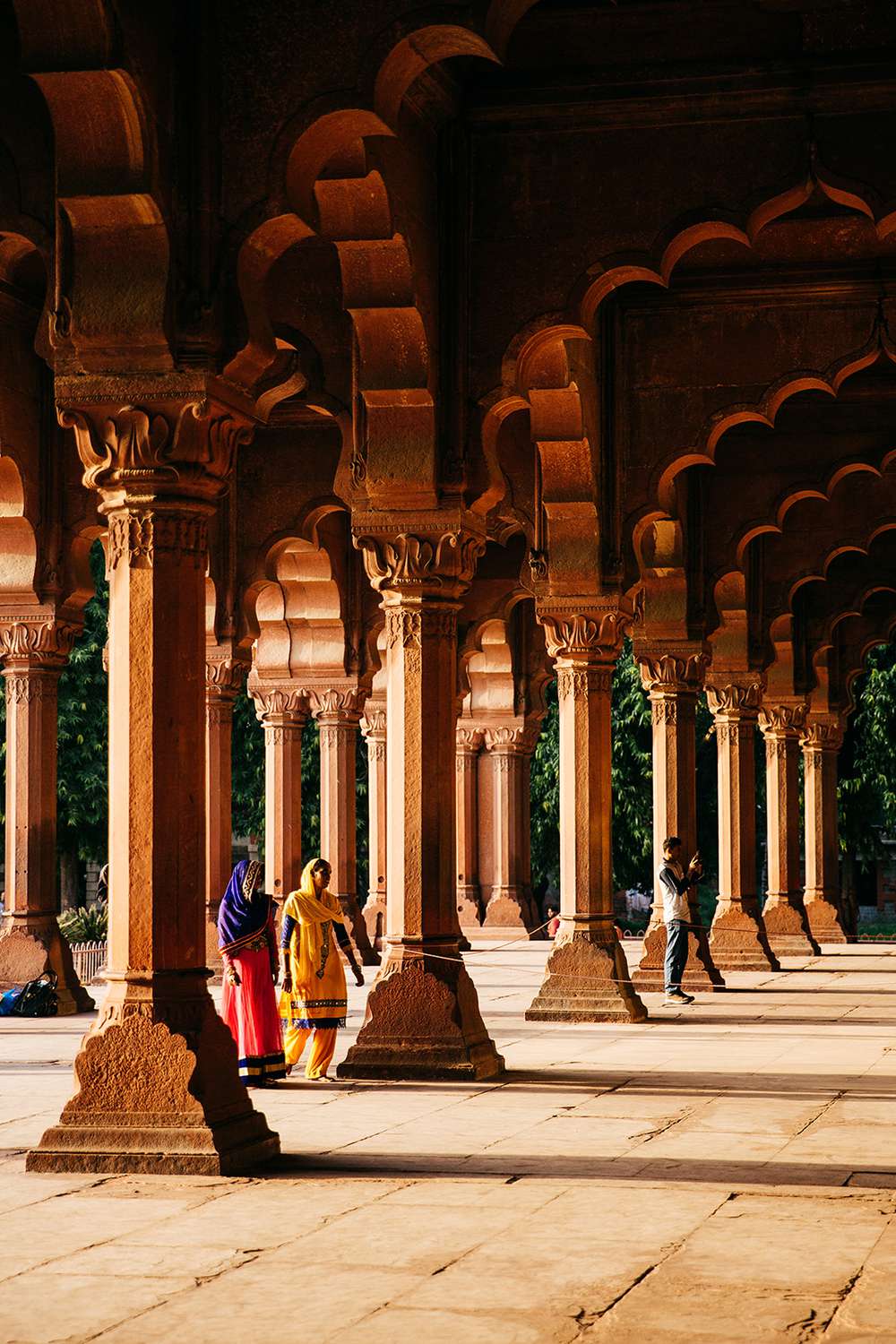 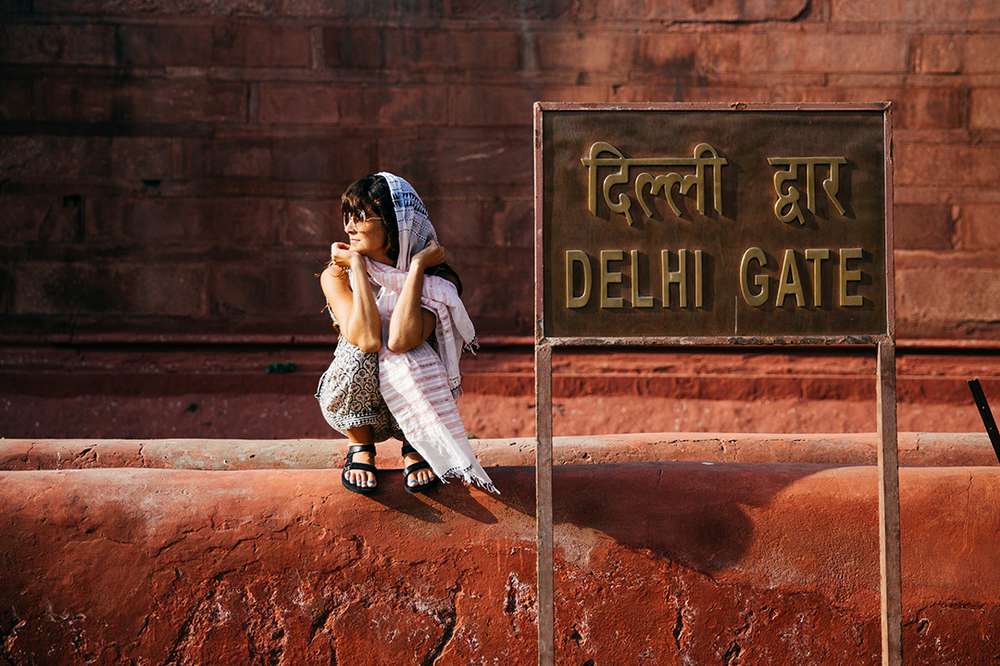 In New Delhi we stayed at the The Manor Delhi. It is tucked in a private, residential area with a highly rated restaurant and spa. We treated ourselves to a massage and it was one of the best we ever had! We only had one meal in Delhi and decided on the Café Turtle in the Khan Market, a cozy little café right above a really cool bookstore. Don’t miss Red Fort, an iconic 1600s imperial residence and museum; The Lotus Temple; Old Delhi for market and old city shopping; Khan Market; India Gate, the 1920-built triumphal arch and war memorial. 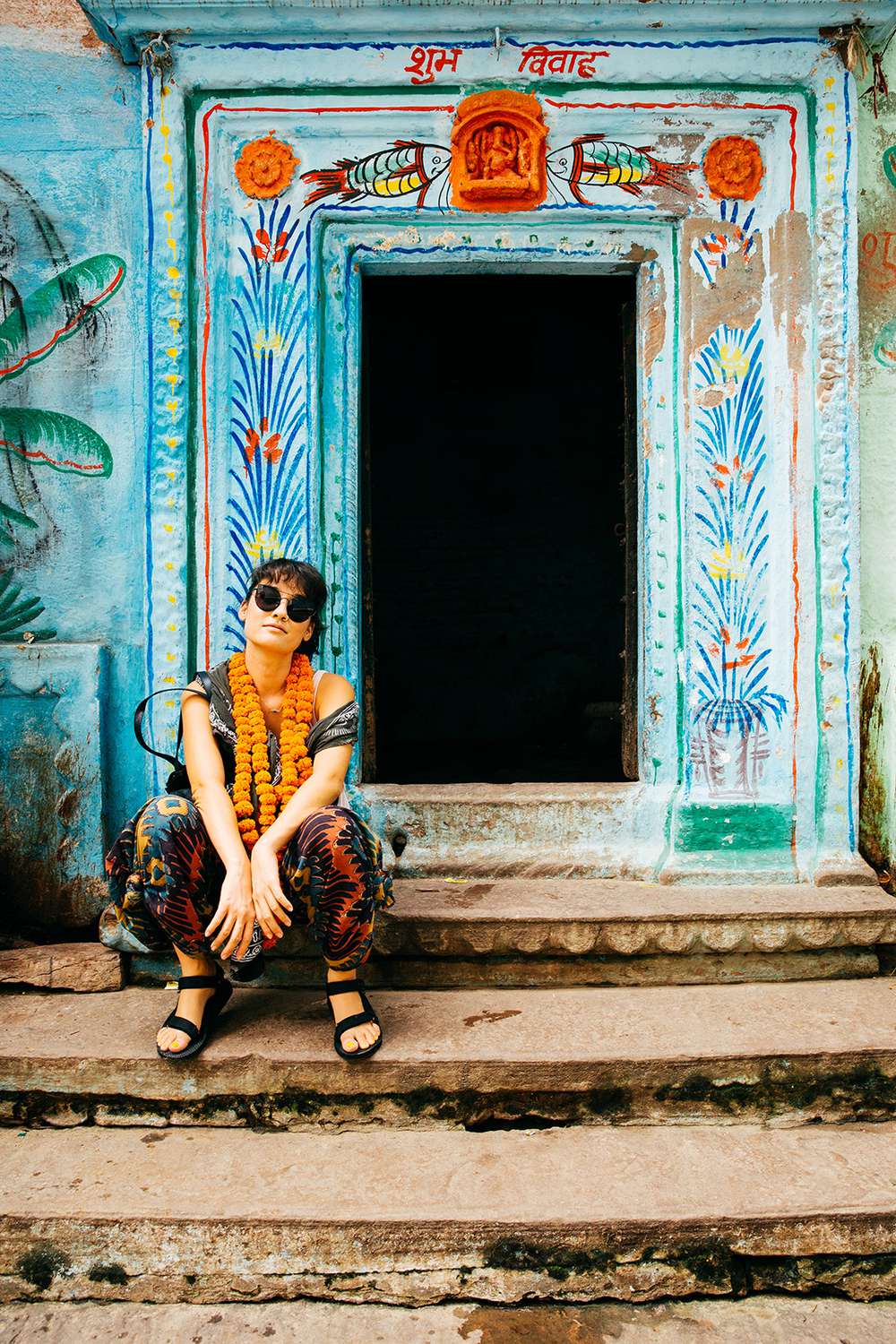 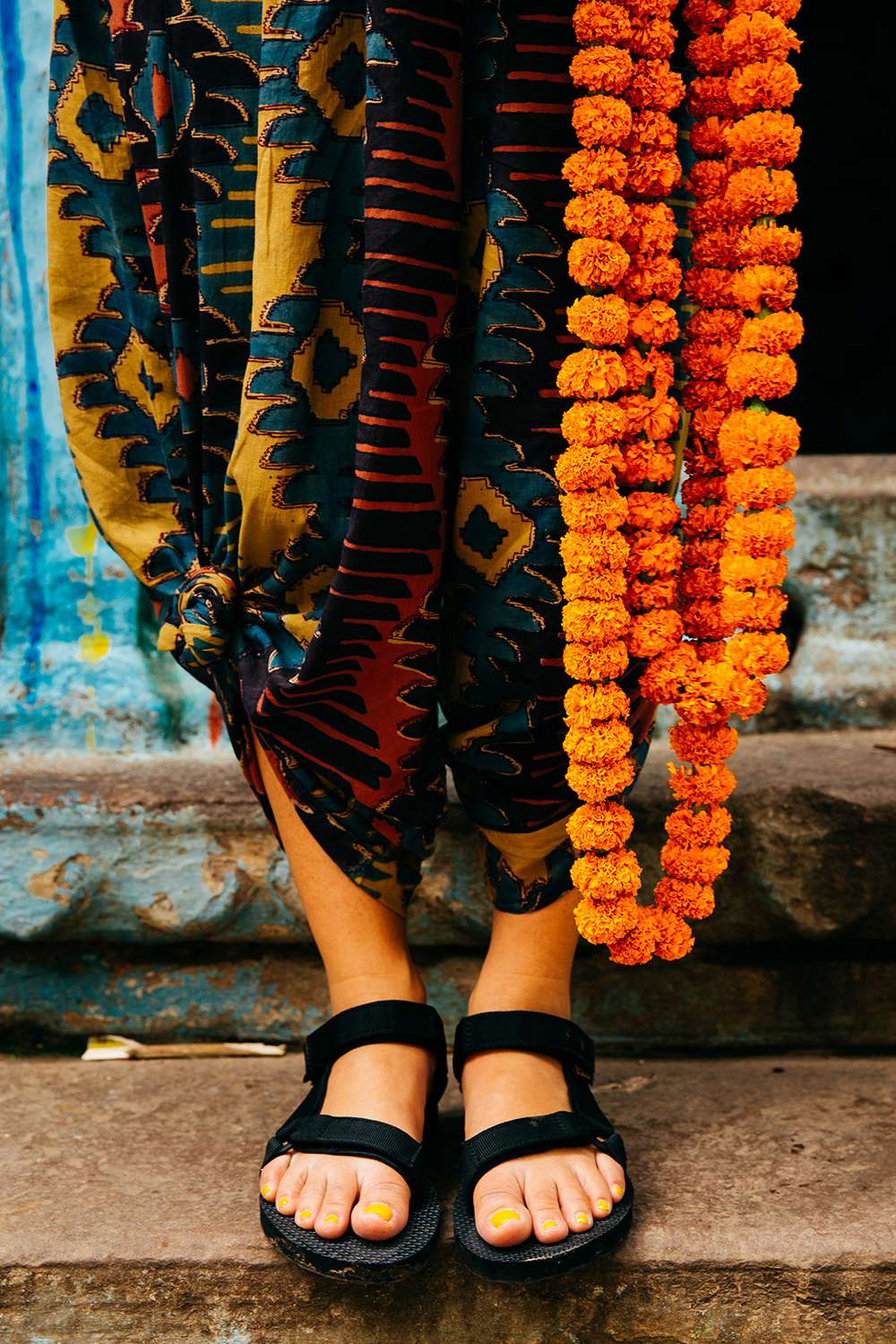 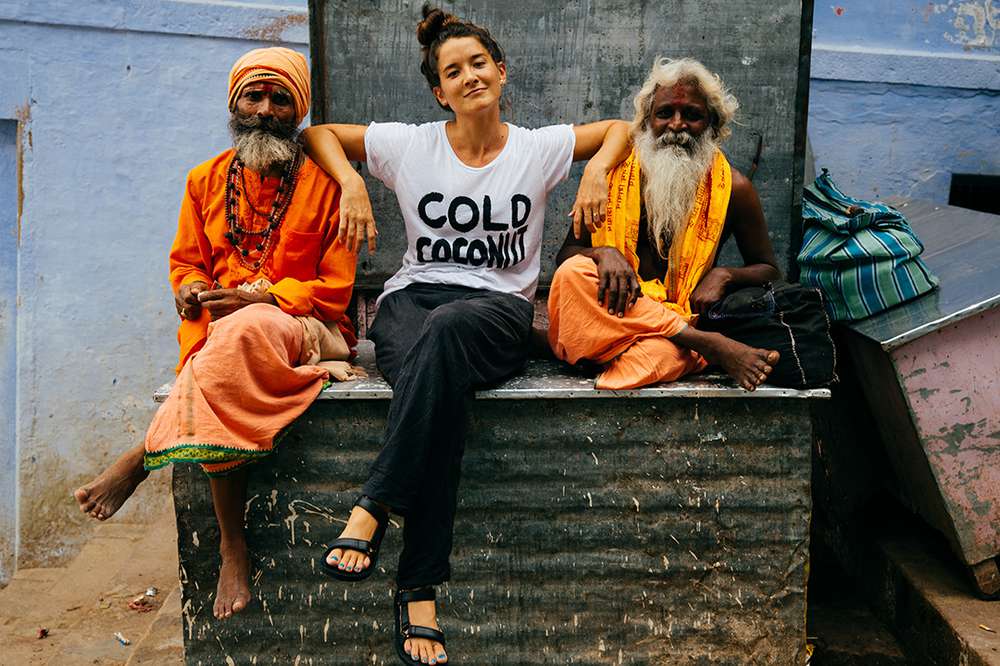 Varanasi was one of the highlights of our trip. Sitting on the Ganga River, it is considered the holy capital of India and brings flocks of Hindu pilgrims every year, where they believe the holy water from the river will grant them salvation. They release their dead in the same water they use to bathe and brush their teeth. The river is also a lifeline for millions of Indians who depend on its resources. Ironically, the Ganga River is considered the fifth most polluted river in the world. The Ganga River is the most unique experience you’ll have here, so go early and hire a boat to take you along the banks of the city for visual overload—most of the ghats and temples are on the shoreline and you can decide where you want to visit when your boat ride is over.

We stayed at the cutest locally owned homestay, The Granny’s Inn. It is just a short walk to the Ganga River and is very affordable. The manager, Mayur, was a great host and we now consider him a friend. He gave us a tour of the old city and gave us many great suggestions for places to eat and visit. Take a 45-miute tukh-tukh ride North to visit the tree where Buddha gave his first teaching. You can also visit a variety of different Buddhist, Hindu, and Jain temples in surrounding areas. Although it does have a tacky, touristic feeling (the giant replicas of the Buddha and his gurus is interesting), it is still cool to see.

The Kashi Vishwanath Temple in Varanasi’s old city is a beautiful Hindu temple dedicated to the Lord Shiva, considered one of the most famous. Be sure to bring your passport as you will need proof of identity and leave any large backpacks at your hotel (you can’t bring them in with you). 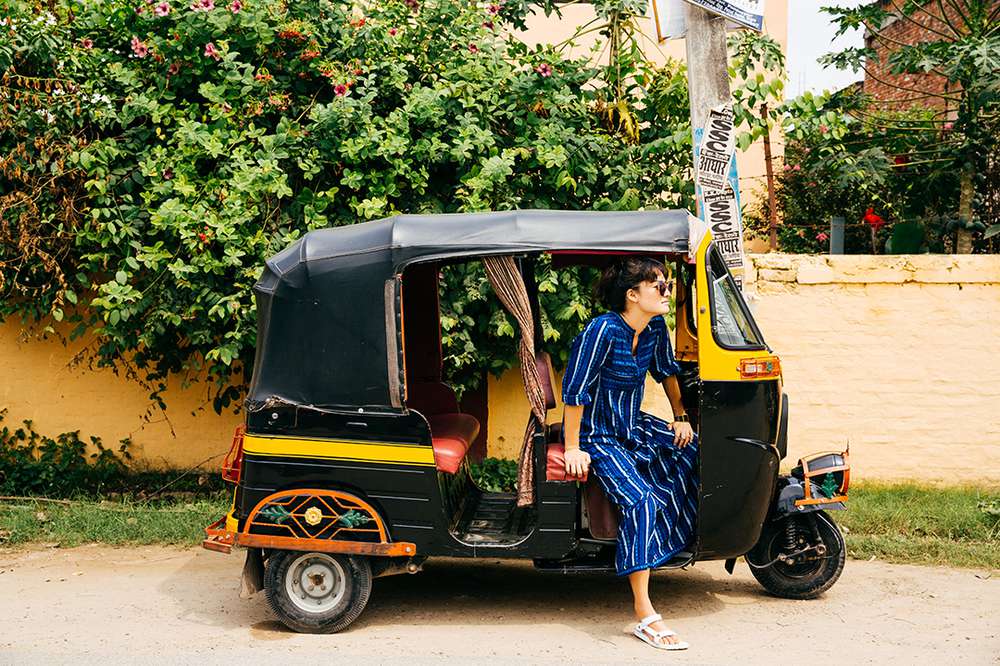 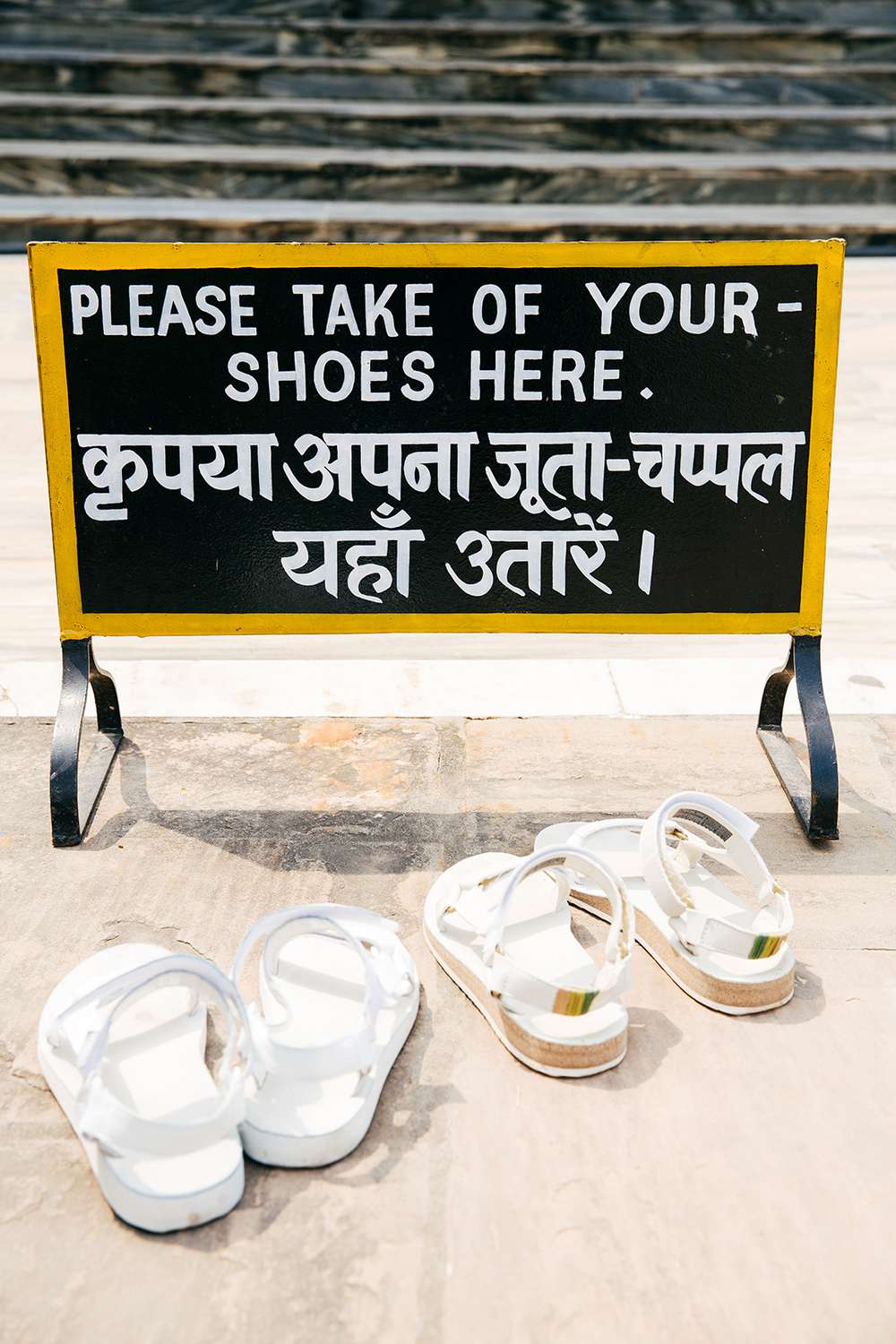 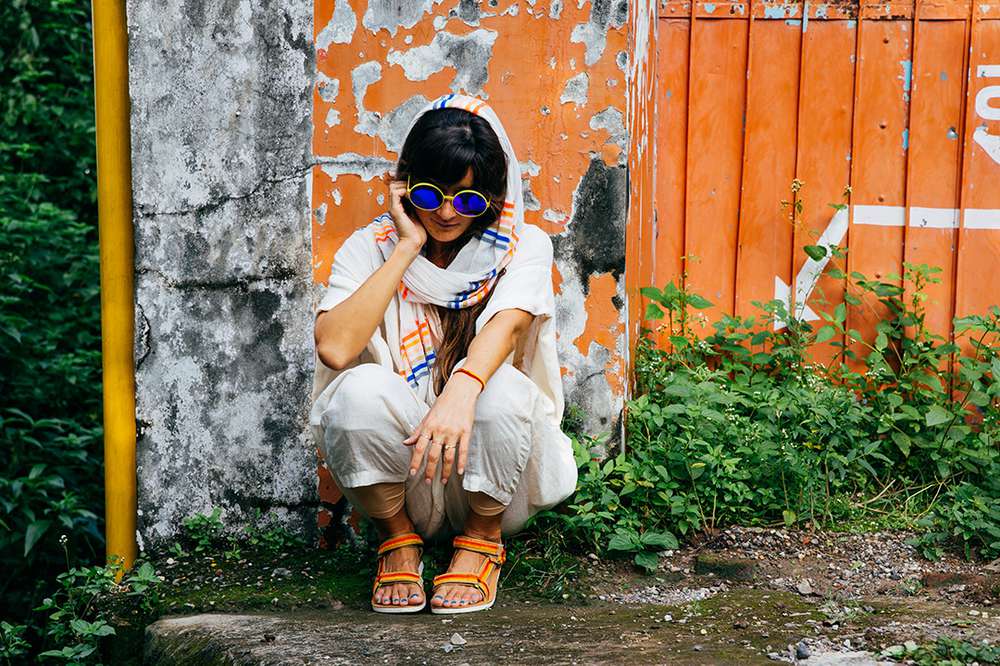 We were fortunate enough to make friends with Nidhi, the receptionist at our hotel who took us on a tour of the city from a local’s perspective. We rode on motorcycles far past Rishikesh and swam in the Ganga River, rented mopeds and drove through the city, visited Nidhi’s family home, and took one of the best morning yoga classes—pick any of the yoga ashrams to participate in a plethora of different kinds of yoga (you can even go to two-week yoga retreat in complete silence). Our friend suggested going to Ved Niketan Dham where we took $2 classes.

Visit the once abandoned ashram where the Beatles took intense transcendental meditation sessions during a really prolific period in their music careers. It is a $9 entry fee for tourists and nature has had its way with what’s left of the facility. All our friends who visited Rishikesh told us to eat at the Little Buddha Café. It is located right in the Laxman Jhula area and overlooks the Ganga River. There is a variety of food choices and I ordered the Butter Garlic Naan and Paneer Butter Masala. 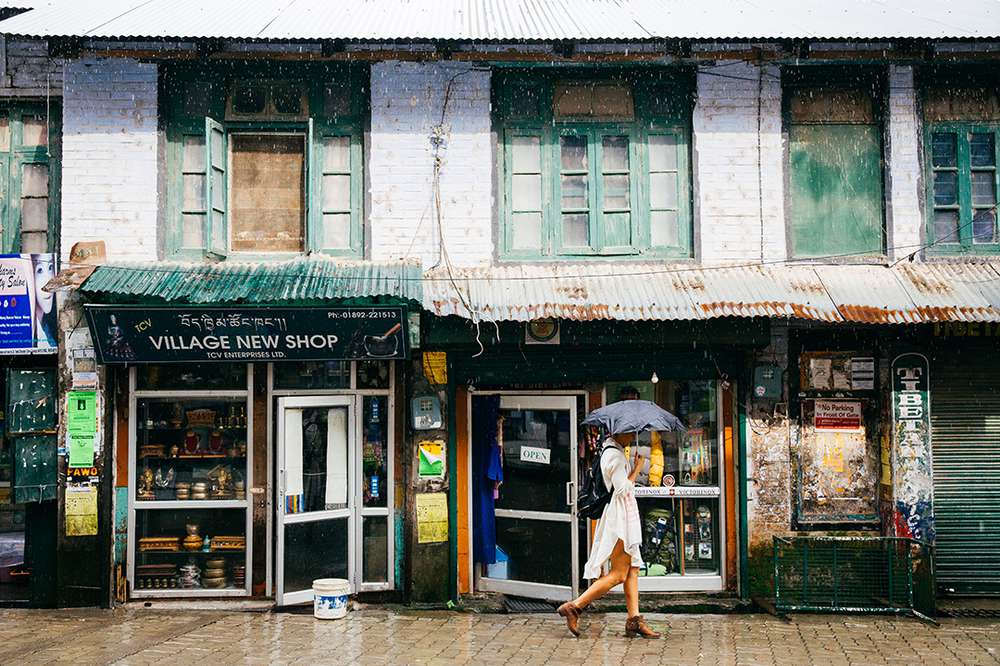 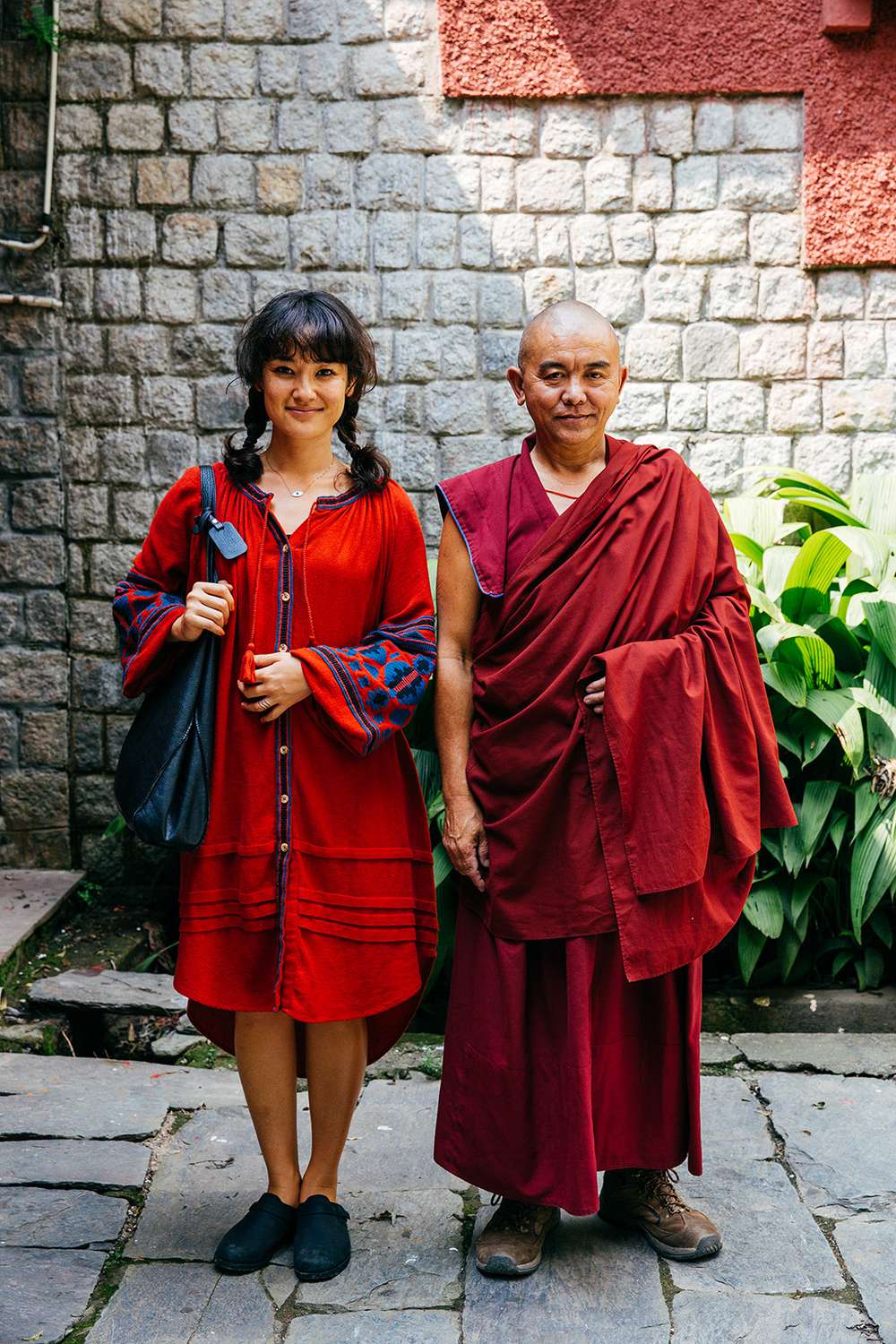 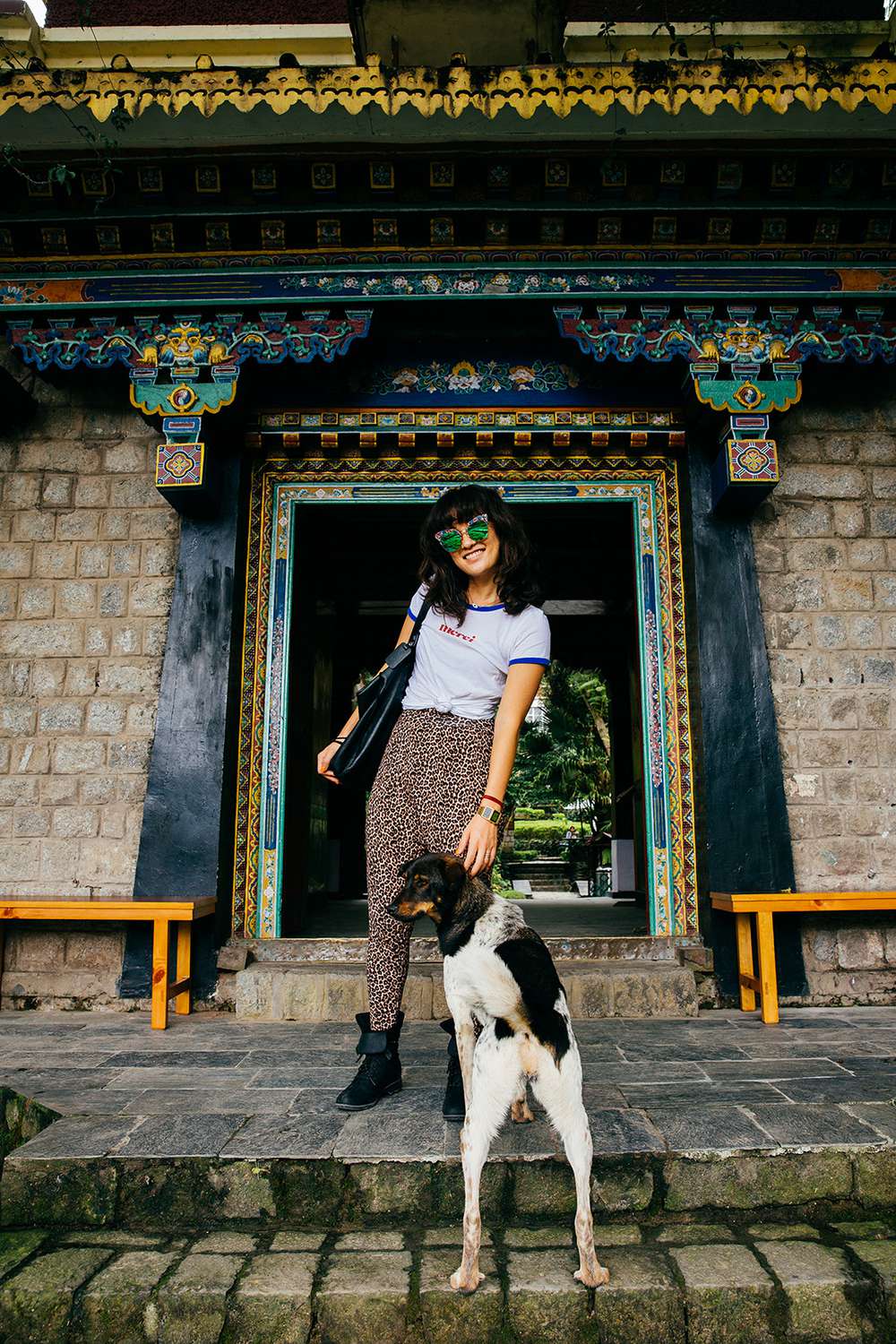 Going to Dharamsala was an entirely different experience than the rest of India, one that gave us insight into the ongoing struggles Tibetan culture and tradition are currently facing. We got to learn about India’s acceptance of the Dalai Lama when he was exiled in 1959 and continuation of refugees finding asylum from Tibet. The Norbulingka Institute was an amazing experience: Over the last several decades China has been destroying temples, practices, and the traditions in Tibet and mined most of its resources. Since 1959 it is estimated that some 150,000 refugees have fled Tibetan with nearly 94,200 finding asylum in India. The Norbulingka Institute (named after the palace in Lhasa, Tibet) is dedicated to the preservation of Tibetan art and culture. They have workshops available to the public including woodcarving, Thangka, wood painting, and appliqué techniques.

We got to take a stroll through the tea gardens at the Kangra Tea Plantations while we were staying the Rakkh Resort. Tea is a huge part of India culture (they have mastered the art of chai tea) and the Kangra region where we were staying is known for their exceptional tea. We stopped at a roadside stand and got bags of gourmet green tea for only $1.50. 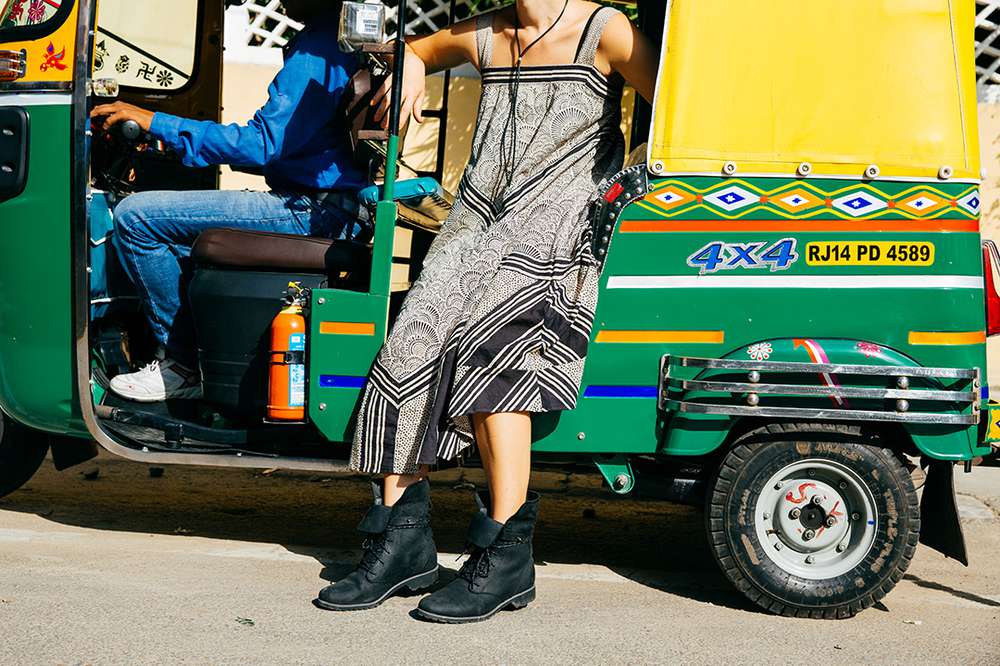 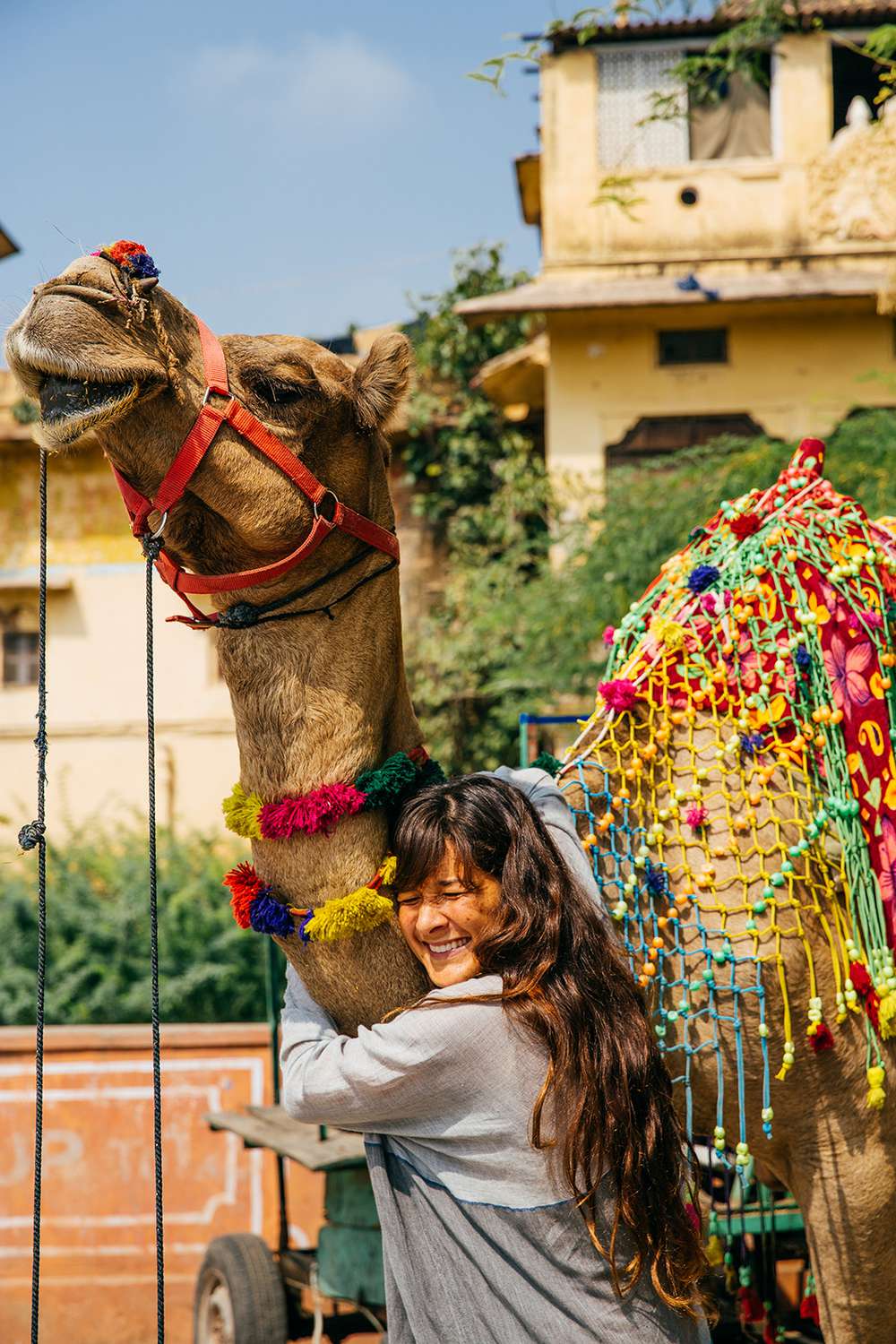 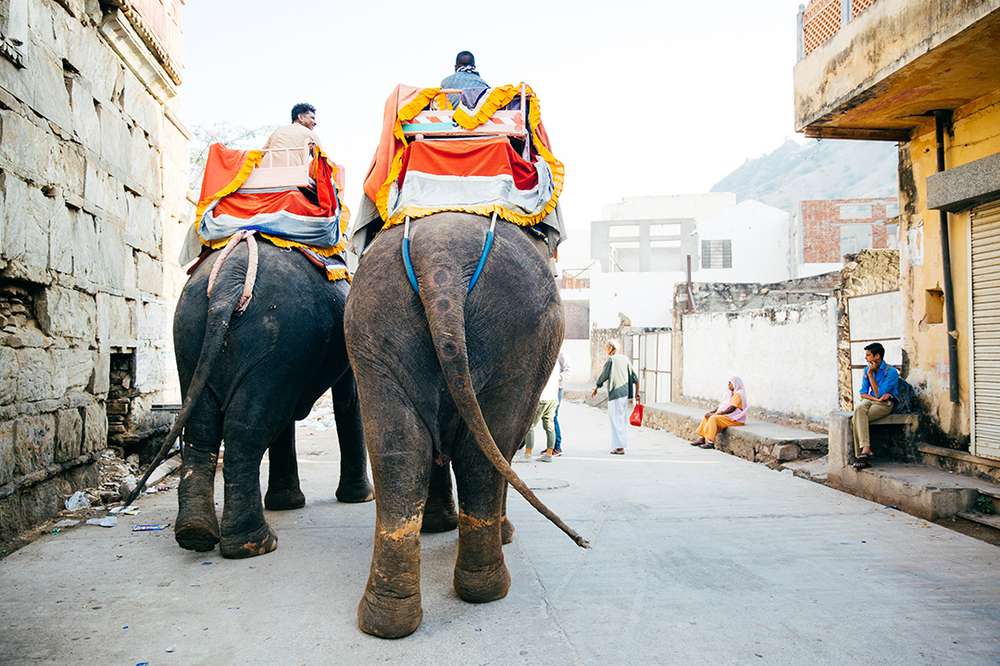 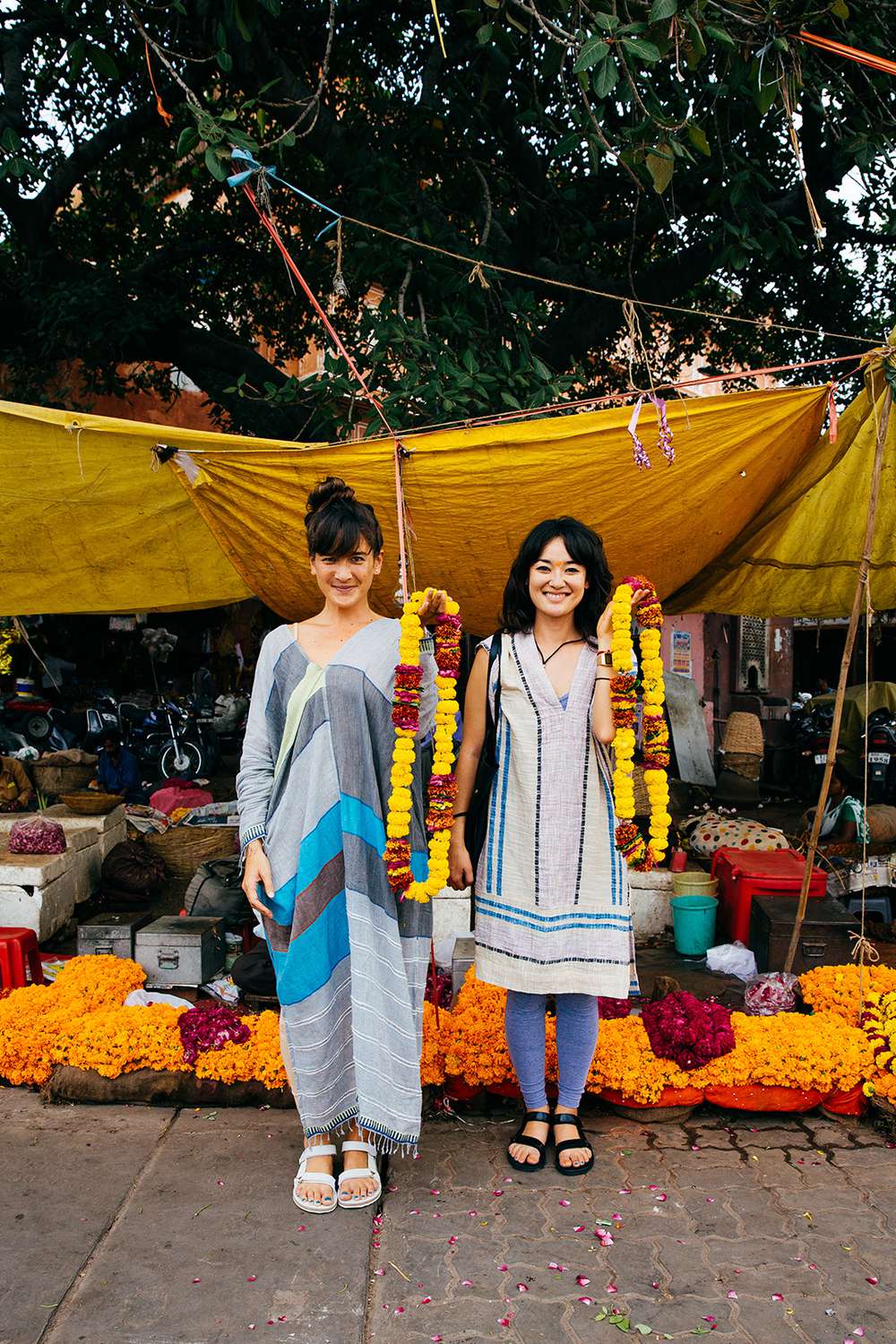 As our last stop on the trip, we treated Jaipur as our shopping and dining destination. Jaipur has become quite a trendy little spot with all kinds of foreign designers and creative people using the unique artistry and craftsmanship of the city. We didn’t hold back as we hopped from shop to restaurant to shop and back again!

Amber Fort is a massive building that is one of the most frequented tourist attractions in Jaipur and is known for its Hindu-style elements. Situated at the top of a hill the view from the fort is just as incredibly as the intricate details of the Sheesh Mahal. The only way up is by foot or elephant. But don’t feel bad about taking an elephant! They are protected by the government and only allowed to work two hours a day and are well loved by their handlers.

Shop all the styles featured here at Teva.com and #strapintofreedom @Teva!