Words and photos by Tara Rock.

Indonesia is one of those places you either love or hate —or both. This was my first time to Bali and I wanted to go with a well-traveled friend. When I asked Tina to come with me for a couple weeks, she hesitated. She had been several times before and had decided she would never go again. If you’ve ever been to Bali before you know why. I convinced her anyway. 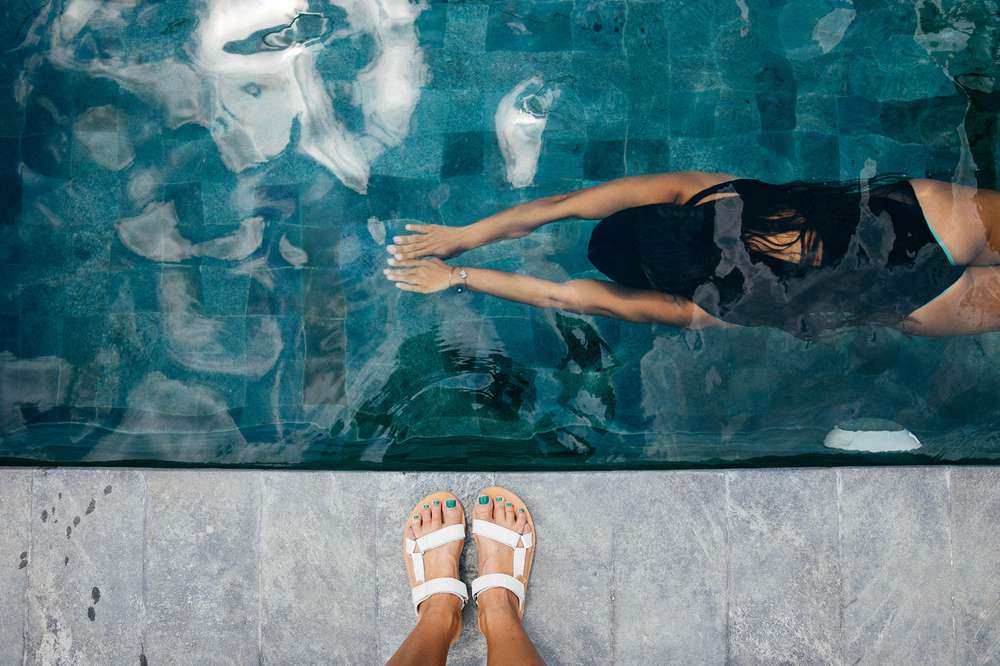 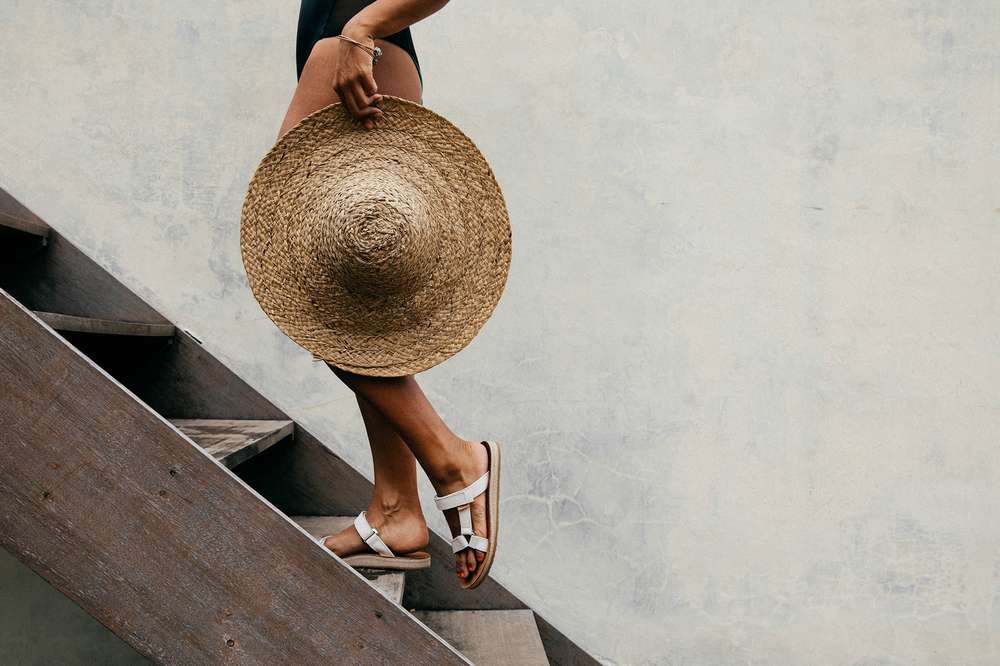 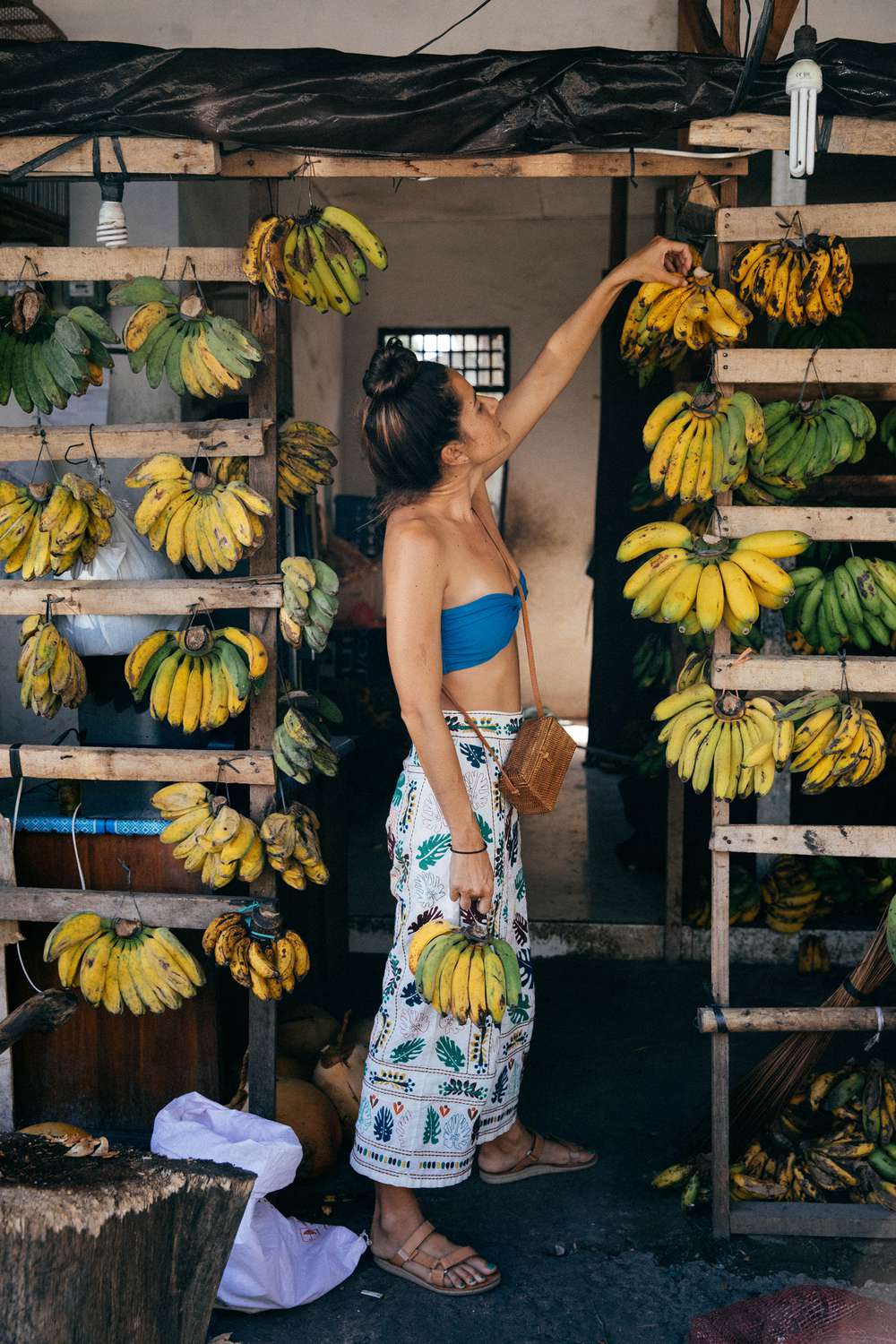 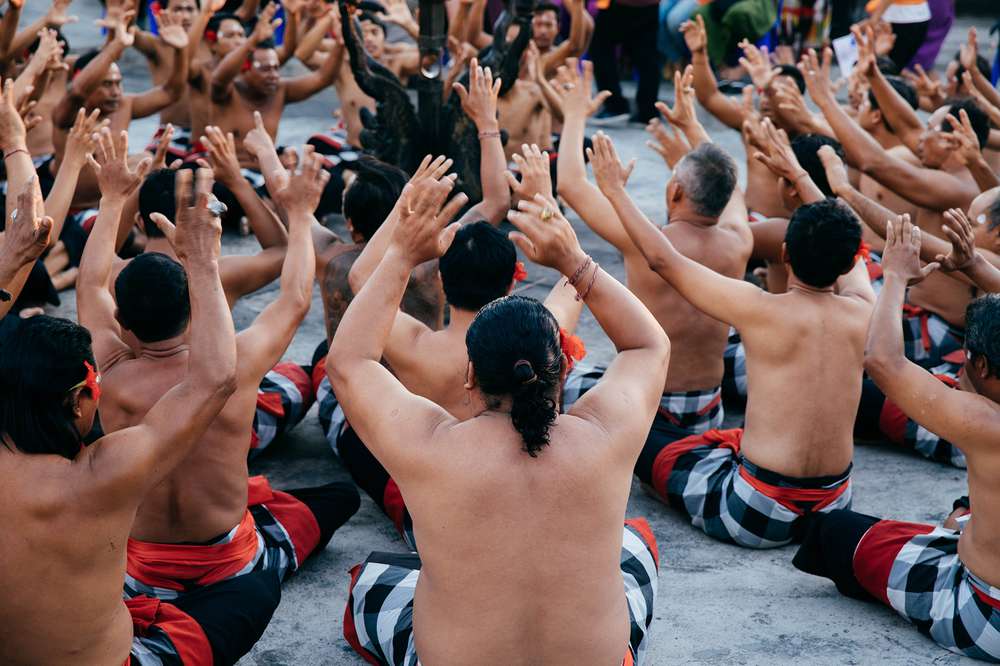 Before I went to Bali I was under the illusion I had to travel the way people on social media did it: villas, pools, partying, and everything cheap. And although we partook in our fair share of the social media cliché, we quickly found it to get, well, a little old. Don’t get me wrong, Bali is amazing. There are beautiful villas and great shopping, and a lot of “safe” westerner-owned restaurants. Trust me, I like that stuff. But I felt like the culture was lost among it.

I’ve found the silver lining — the Balinese have many more opportunities and we seldom came across begging or homelessness, and the westerner-owned restaurants are much more conscious of plastic consumption — why would I travel halfway across the world and completely ignore Bali’s true culture and tradition?

If you’re a conscious traveler like me, the best advice I can give you is this: Get out.After we got our dose of beaches, bars, and pool-time on Bali, we went island hopping. 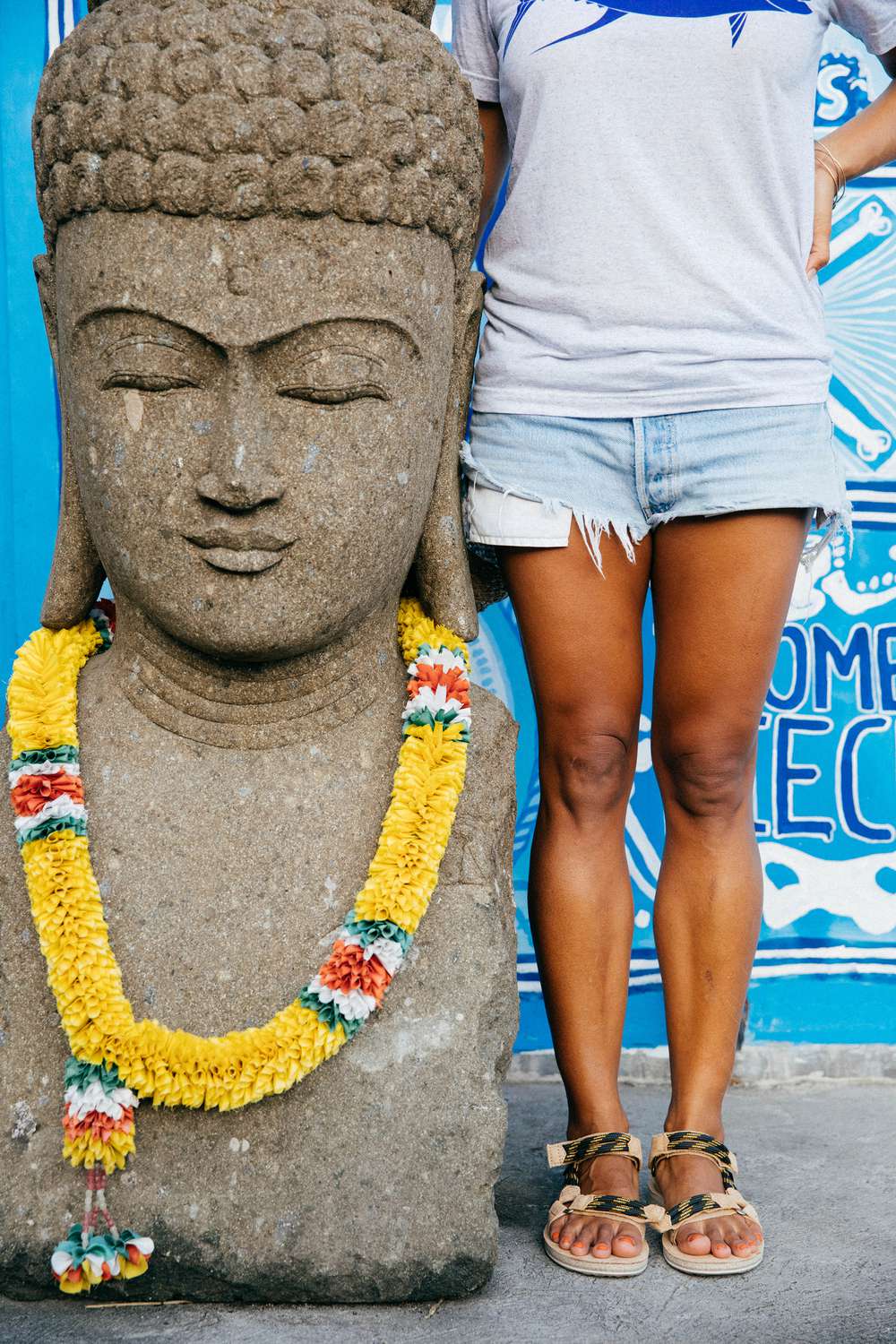 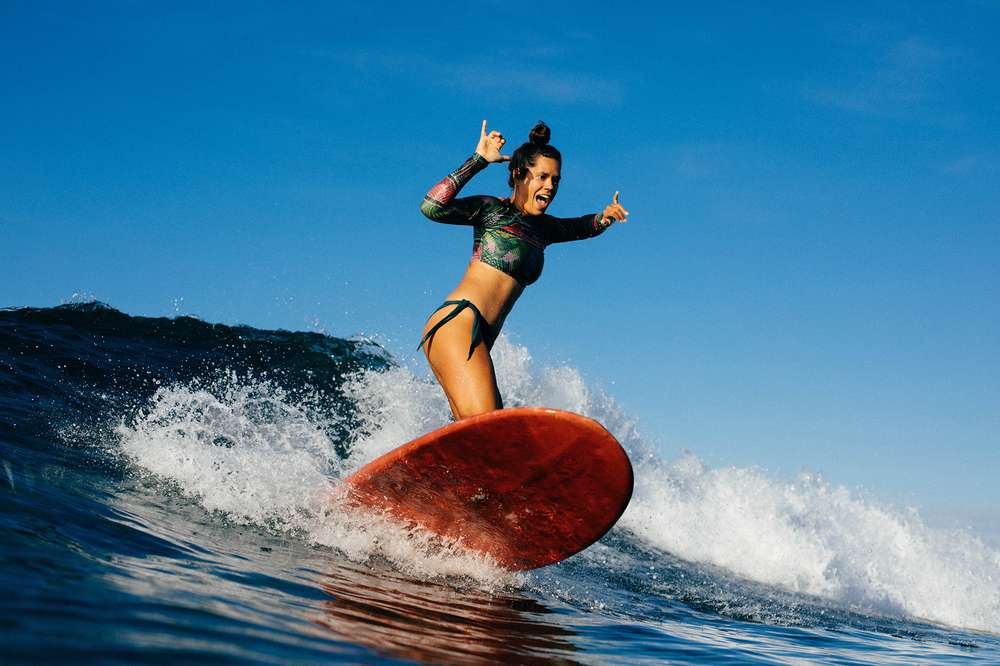 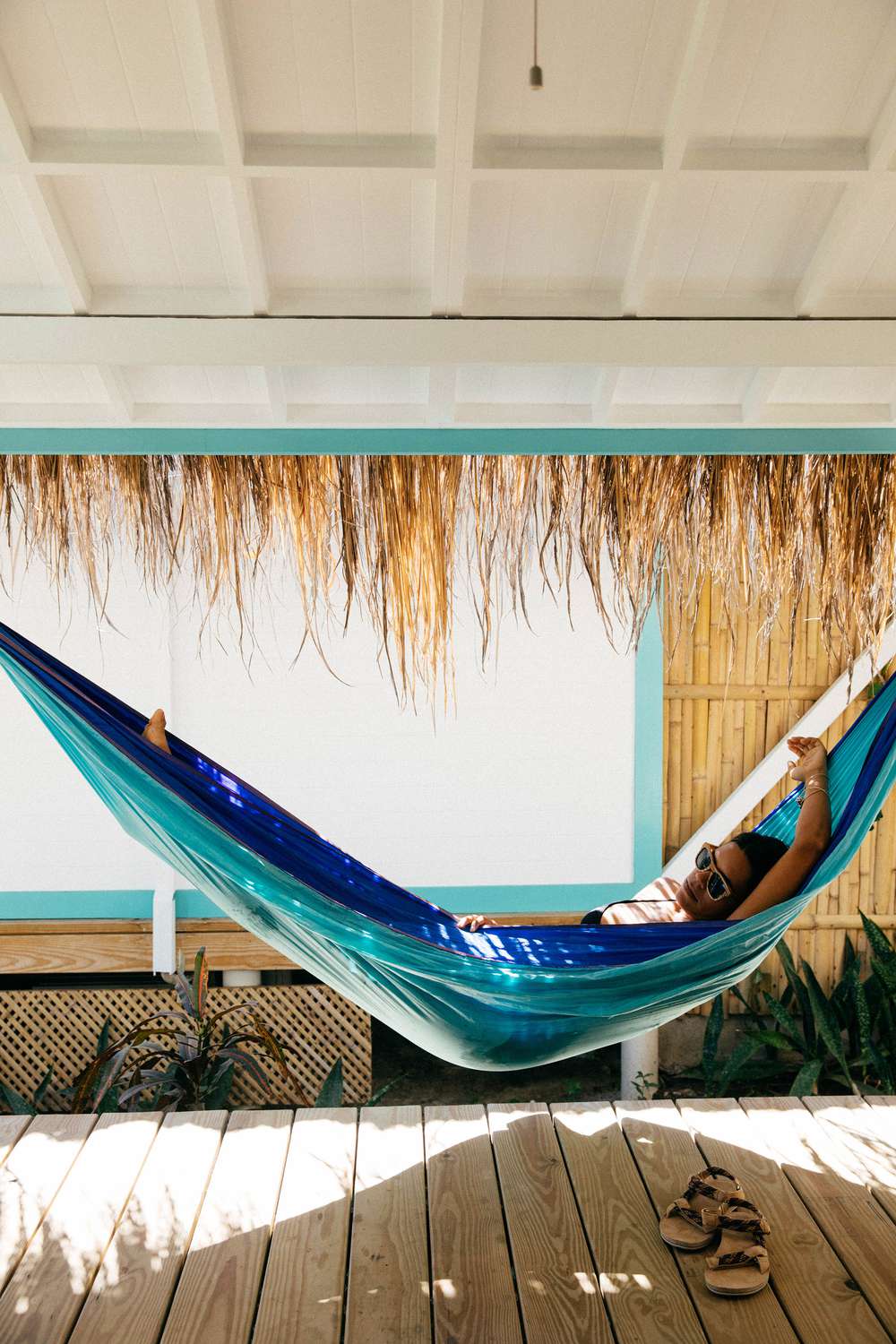 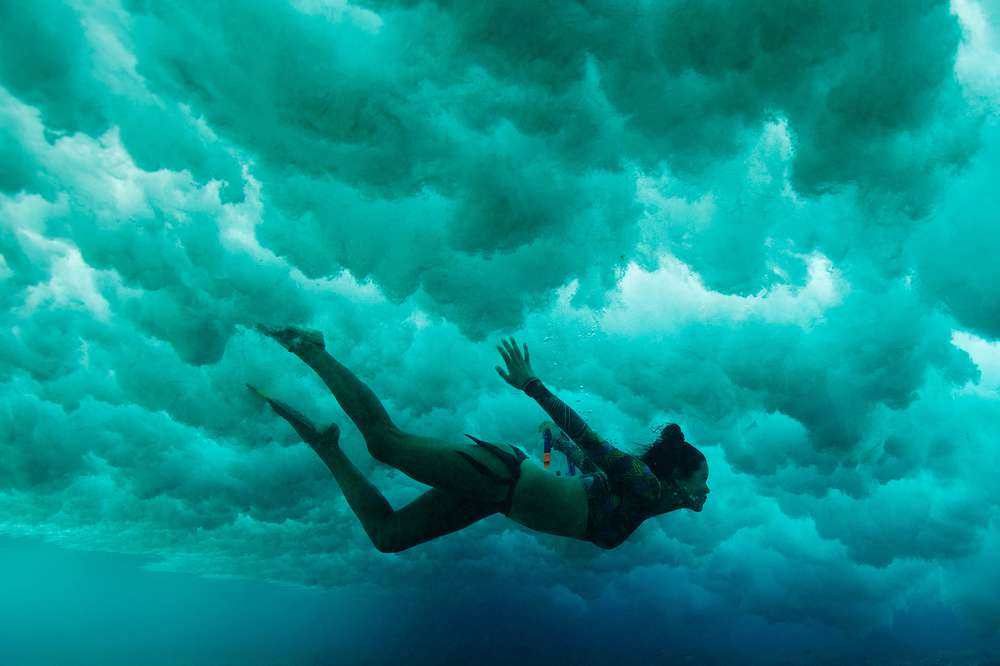 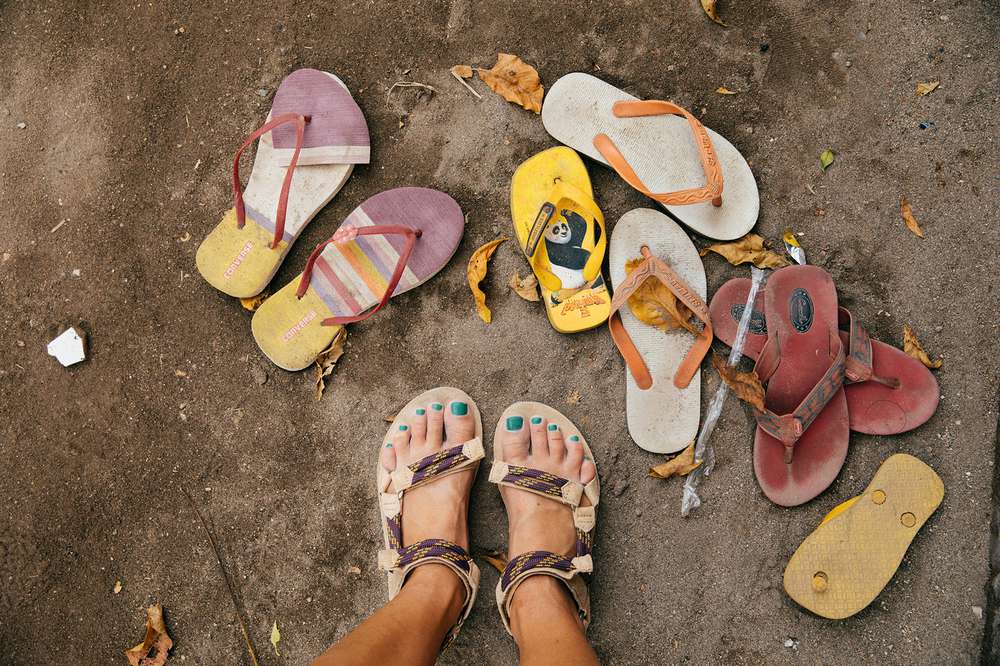 First stop: Gili Trawangan. For those of you who have been to Gili T, I know what you’re thinking: You wanted to get away from the craziness of Bali and you went Gili T?! I know, I know. It seems ridiculous.

When we first arrived we felt like we were walking off a scene from The Beach, that movie with Leonardo DiCaprio where he leaves his peaceful little commune and goes into the city only to be bombarded with tourists, hagglers, honking and a bunch of other unpleasantness. Yeah, it was that bad, but we quickly crossed the island and arrived on the quiet side of town. It took us a little over a day to like it there. Sometimes you have to give yourself a chance to warmup to it.

“Indonesia is one of those places you either love or hate — or both.”

The Gili Islands have no cars or petrol-run vehicles. There are only bikes, horse and carriages, and an occasional electric scooter. I still stand by my longtime motto: Hang with the locals. Sometimes you travel to places and feel like a tourist. You visit the landmarks, eat at “safe” restaurants, and only meet other tourists. But if you make friends with the locals you have the opportunity for an entirely different experience.

The best moments of traveling cannot always be captured by a camera. Tina can agree that one of the most memorable experiences from our trip was when we “Begibung” (meaning “we all eat together” in Senggigi). We made friends with a couple of really cool Gili boys, bought street food, sat on the beach, and ate traditional fare with our hands under the moon. 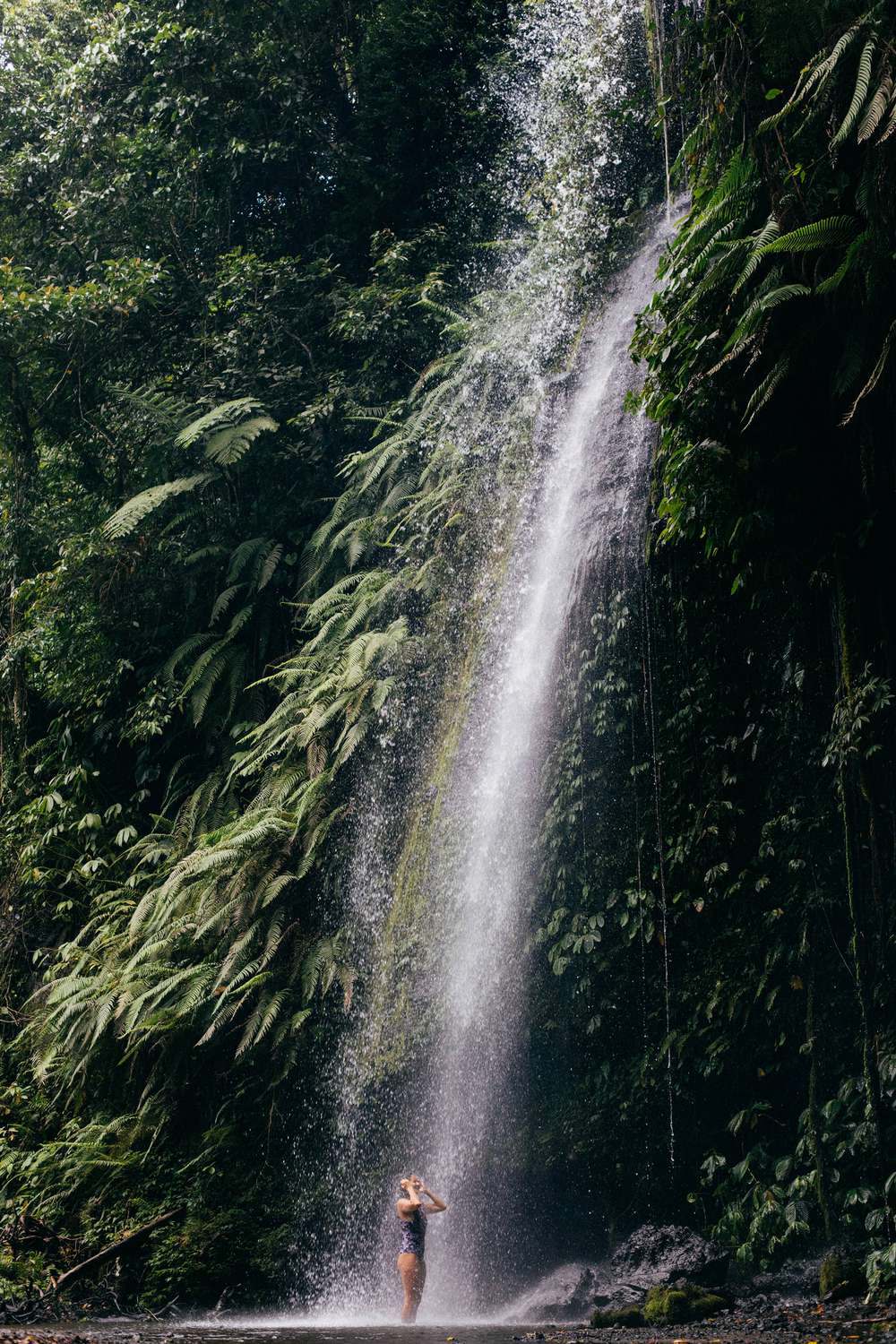 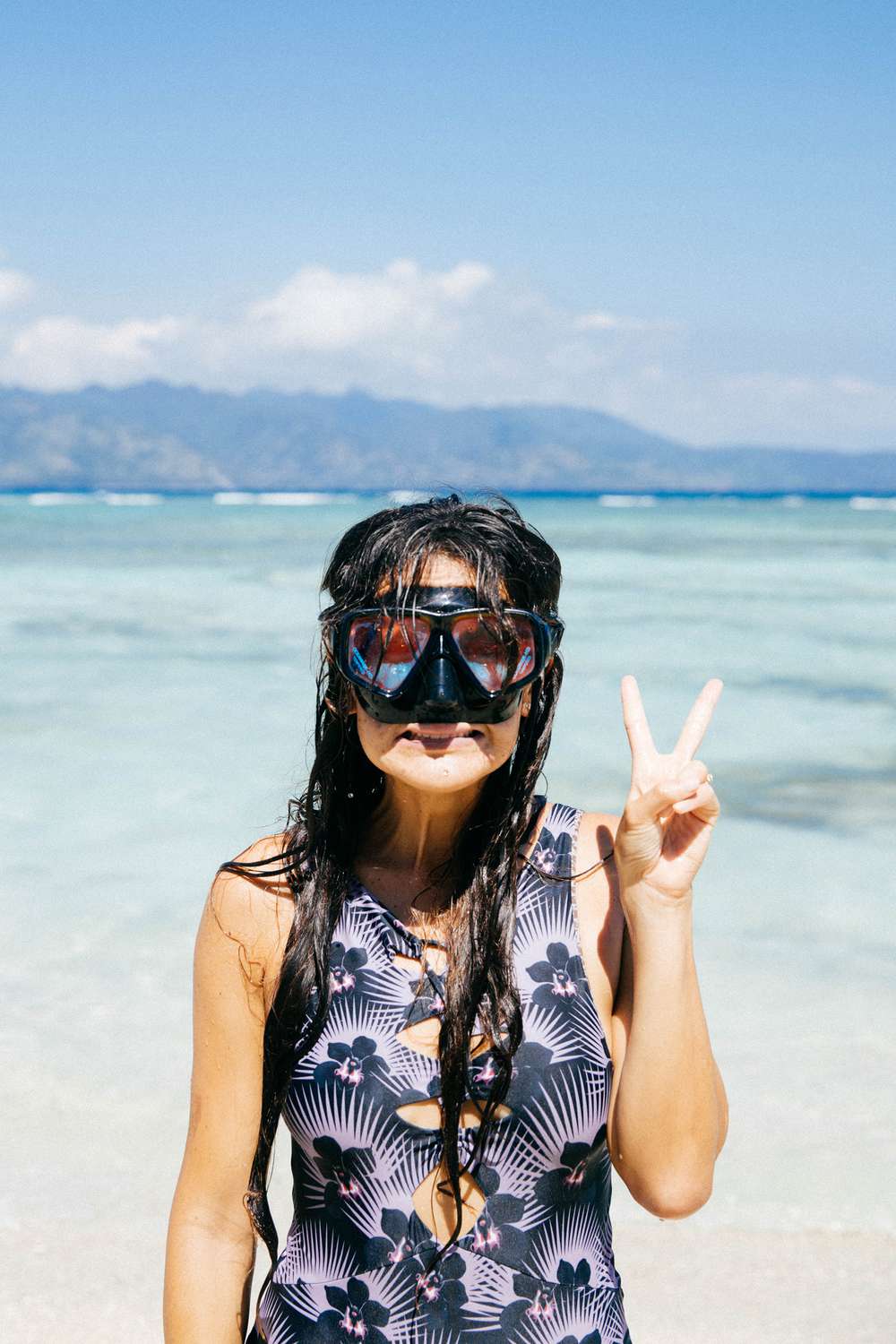 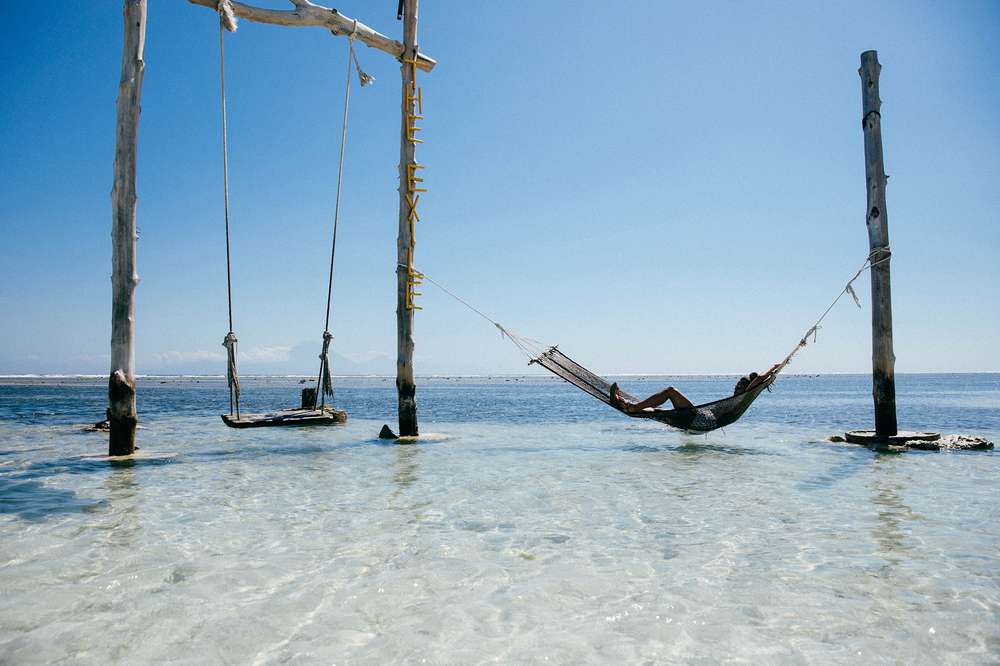 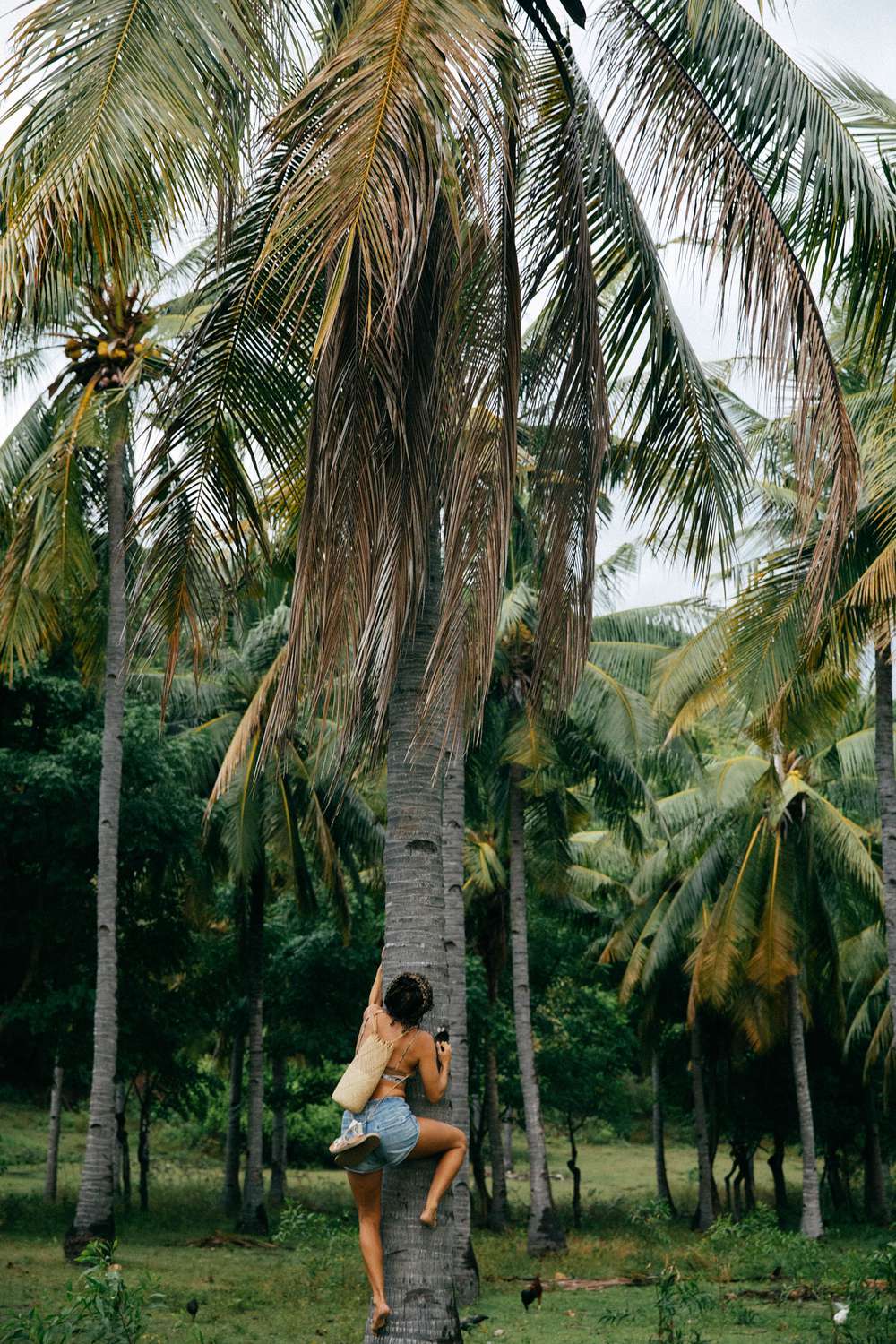 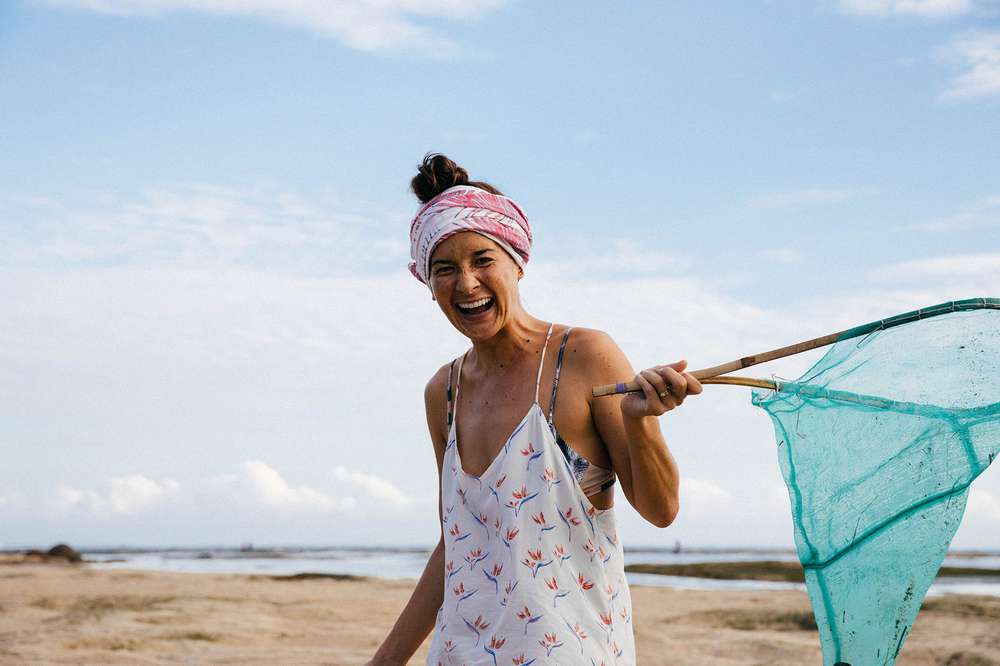 Lombok feels and looks like what Bali probably used to 20-30 years ago. It feels like you’re going back in time. Everything feels slower and easier in Lombok.

The moment we got off the boat from the Gilis, we headed straight for some waterfalls. Besides a few other tourists, most of the people enjoying the waterfalls were local or from surrounding islands. It felt a little like being home.

Note: Lombok is predominately Muslim and it’s respectful to be a little more covered up while you’re there. Tina and I opted for one-pieces and pareos while we were at the waterfall and  beach.

Later, we got in some beach time and had a huge upset. While we were walking the beach one afternoon we noticed a bunch of fishermen out on the reef at low tide. We got excited and started helping them catch the small fish in the tide pools. I am no fisherman but it was oddly very easy to do.

We came to find out they were “bleaching” (a method of catching fish by using actual bleach in the water to kill the fish). It was like our hearts were hooked to an anchor and it fell straight to the bottom of the ocean. I had heard the term used before but this was the first time I experienced it (much less participated). Not only are the fish and reefs dying from the bleach, but we are also putting it in our bodies. It was an eye opener for both Tina and myself.

But sometimes bad experiences can have good outcomes. After that very moment, I made a conscious decision to no longer eat fish or meat unless I know exactly where it comes from. Bad experiences breed change. 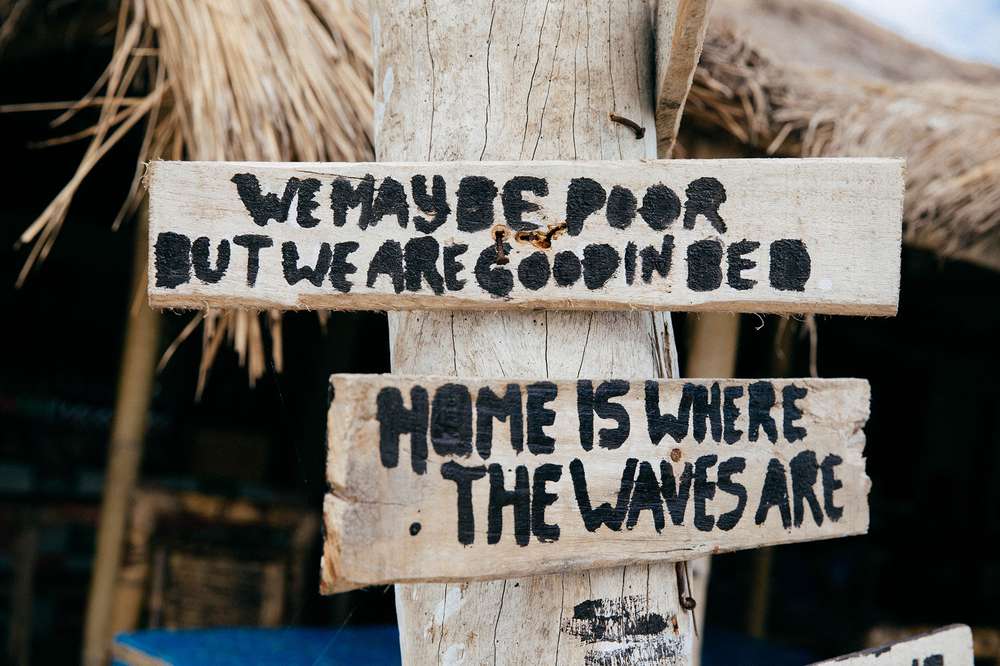 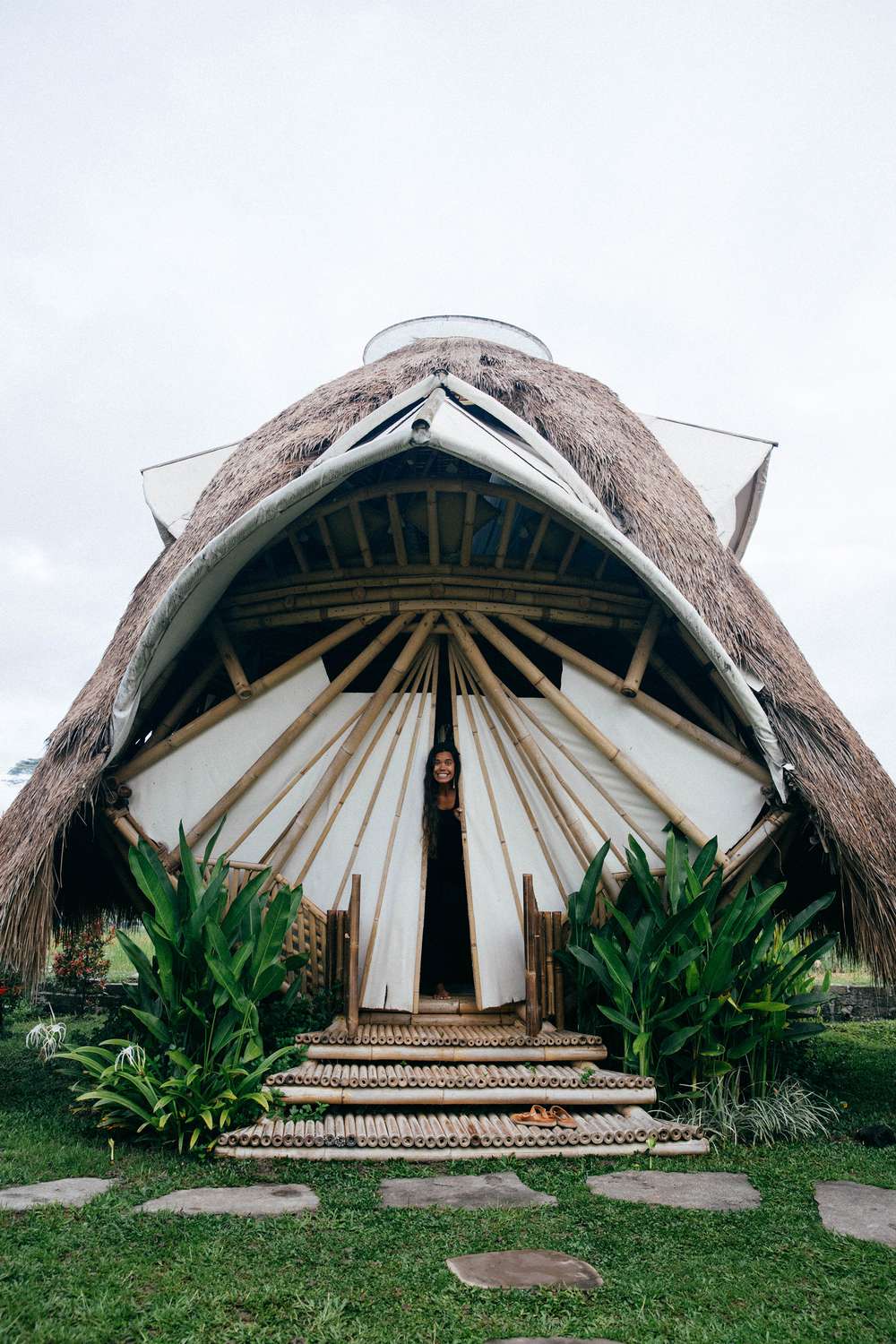 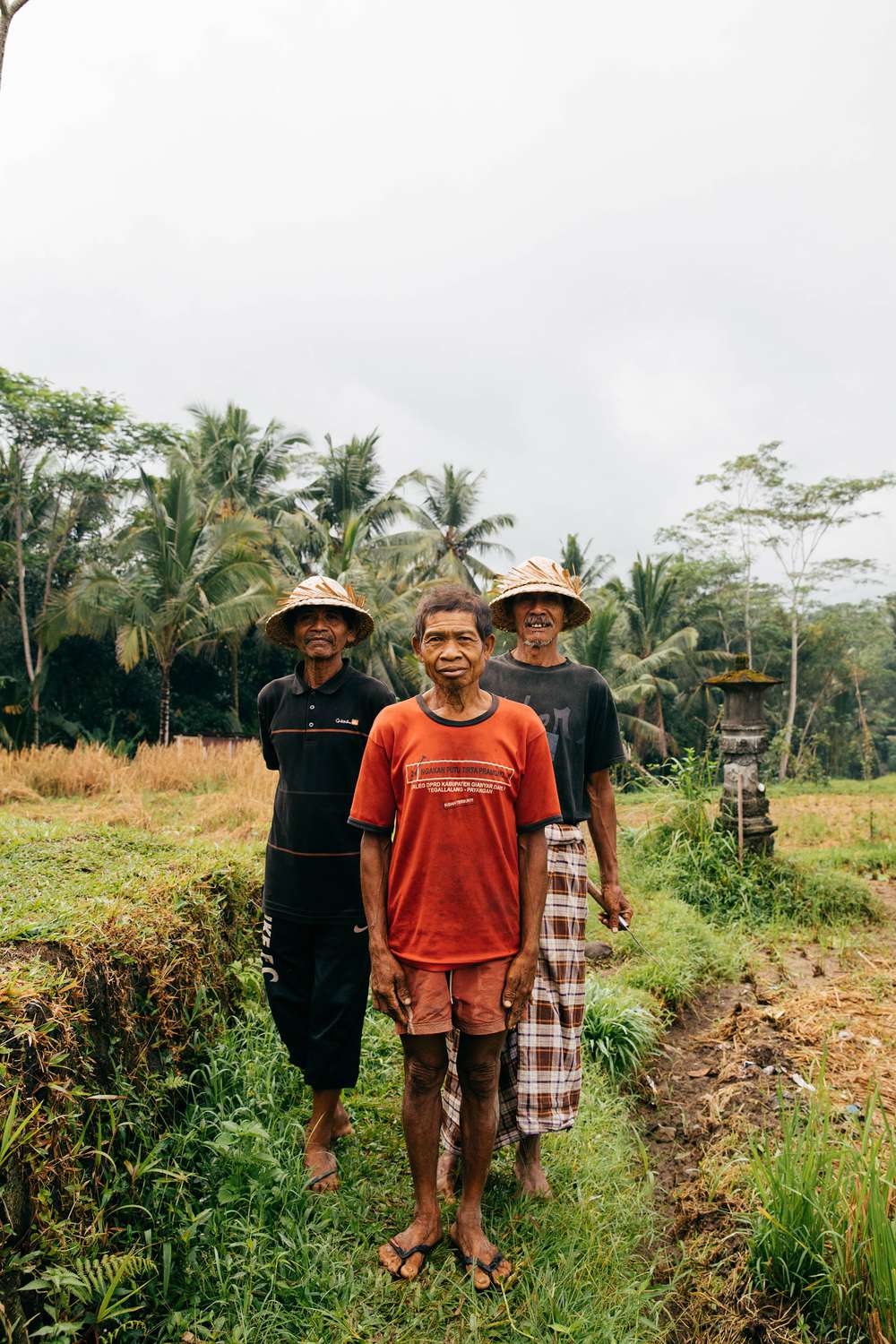 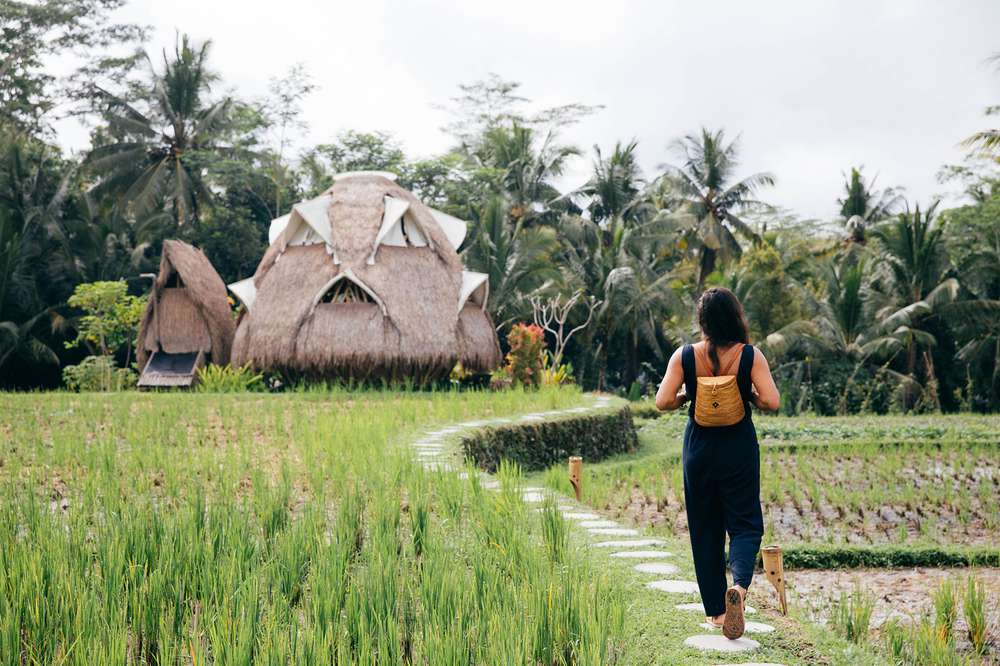 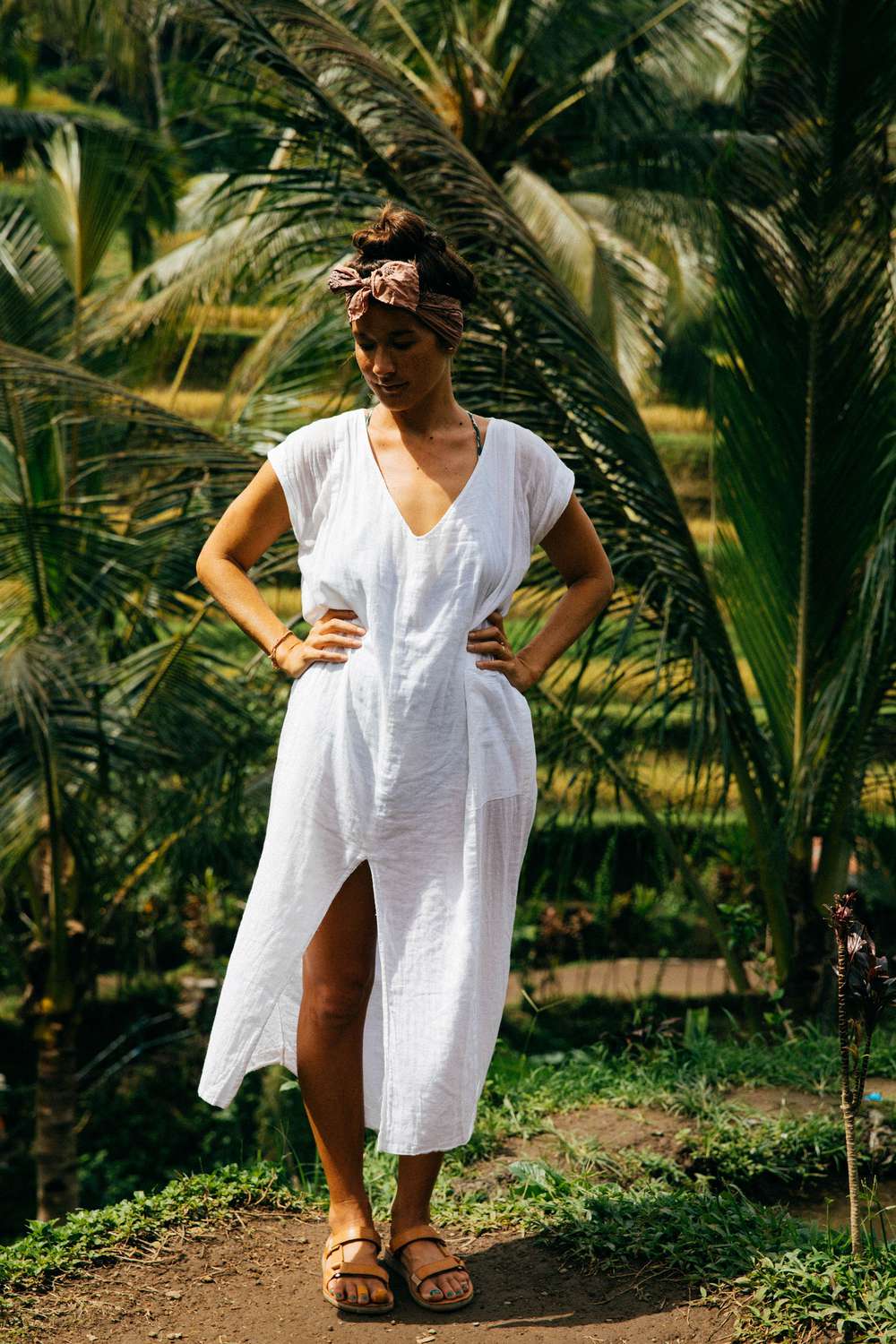 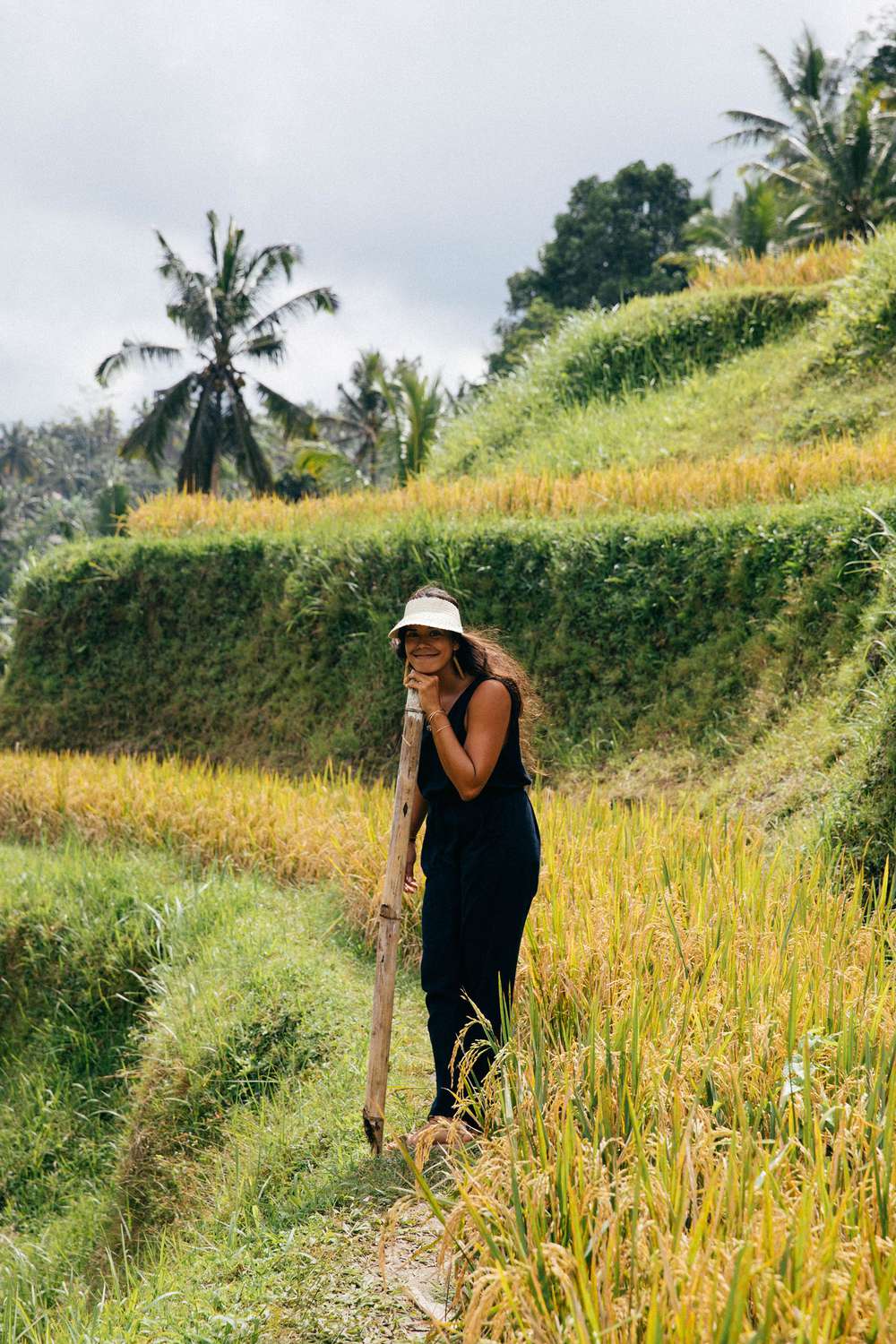 Our final stop before hopping on the plane was back on Bali in Ubud. We had heard from friends and locals that it still had the magic of Bali, and it’s true. Nestled in the middle of the island, Ubud is surrounded by rice paddies, artisans, and a kind of peace and quiet I can appreciate.

We decided to use our time in Ubud to relax. Although it was considerably touristic, we could still get pockets of that magic everyone talks about. We stayed in this amazing dome in the middle of rice paddies made entirely with natural resources and woke up to the voices of farmers in the field. Going to a monkey temple is a must. Be sure to ask your driver to take you to the quieter, less frequented temples. 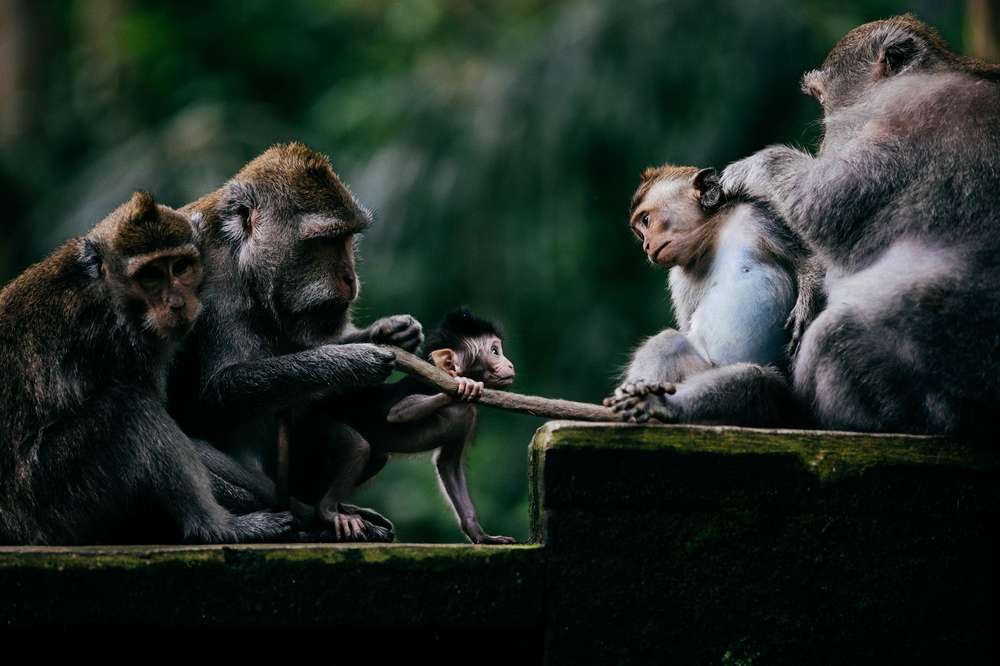 Teva Slides are probably the most convenient sandals to wear when traveling to islands. I especially love the fit and comfort of the leather slides. Thankfully, Tina and I are the same size and could trade sandals whenever it matched our outfits.  The Original Universal Rope sandals were designated for chilling and longer excursions. They are insanely comfortable and it might be weird to say; but they almost feel like wearing house slippers — that’s how comfortable they are. They are great for the plane, too! 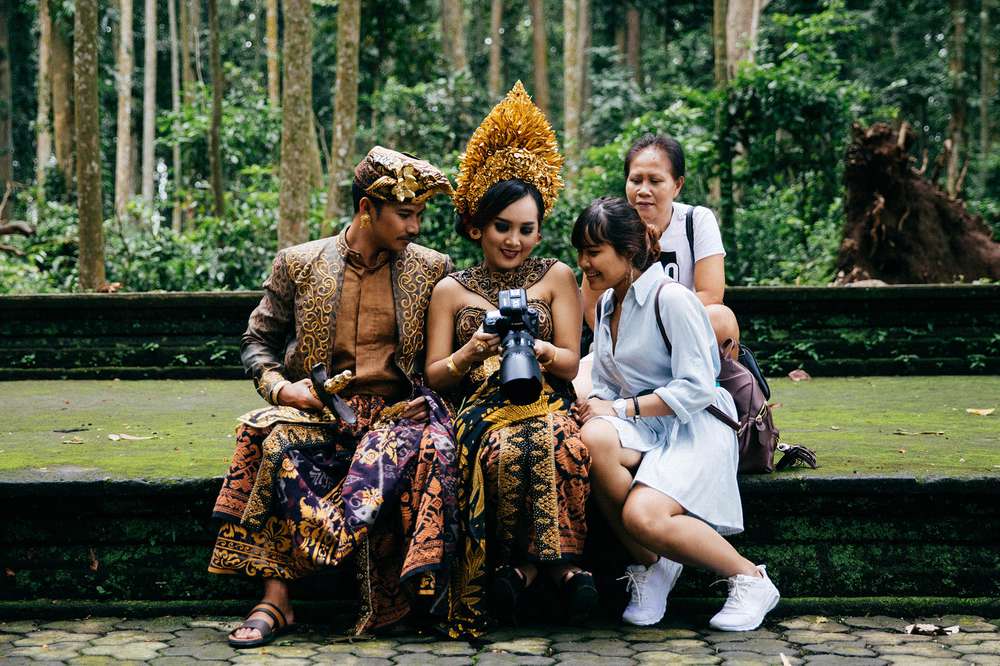 BEING A CONSCIOUS TRAVELER AND A BETTER HUMAN

After traveling to Indonesia two things became very apparent to me:

The ocean is overfished in very unethical ways

In the distant past, humans used to catch and harvest our own food. Then, we started relying on the community to provide for us (purchasing from fisherman and butchers). But now, we go down to the grocery store, purchase whatever is on the shelf, and never question where it’s coming from or how it was harvested.

Seeing firsthand how Indonesians caught and harvested their fish shocked me. On a very small scale, it was the first time I realized the impact humans have on the ocean. But that brief encounter made the issue very real for me. “More than 85 percent of world’s fisheries have been pushed to or beyond their biological limits” (according to WWF) and within the last 50 years humans have killed 90 percent of the ocean’s top predators (according to National Geographic). So you can imagine the imbalance we have created in the eco-system and what will happen if we continue these unethical practices. 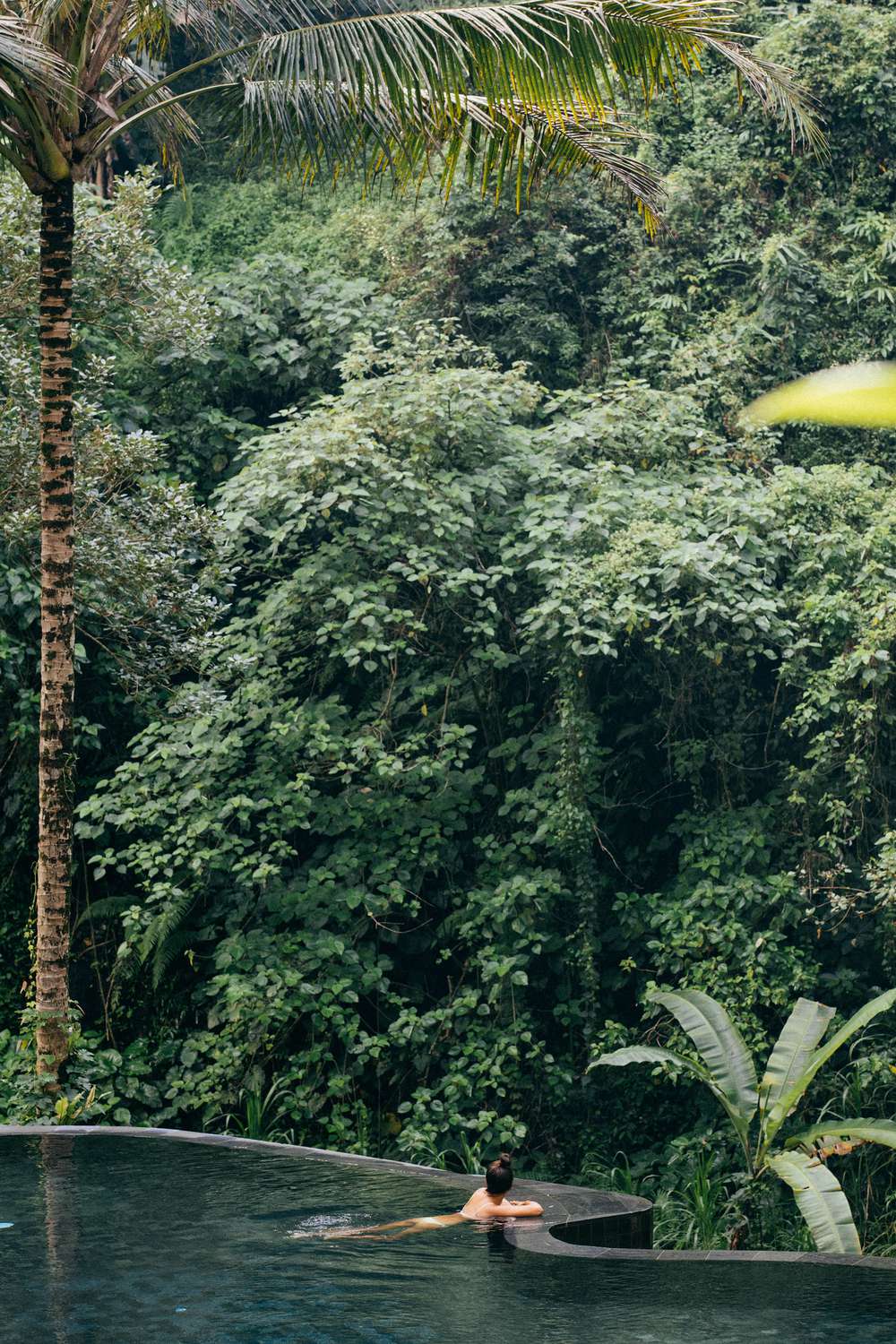 Now, I don’t want to point fingers at Indonesians. These kinds of practices are happening all over the world and if you aren’t doing anything about it, you’re apart of the problem. It is all of our responsibility to be stewards of the land.

I am a part of the problem. This made me realize I have to do my small part. In addition to educating myself and others, I made a decision to no longer consume fish or meat if I don’t know exactly where it’s coming from. I want to know the name of the fisherman or farm and be sure that whatever I am consuming is sustainable. 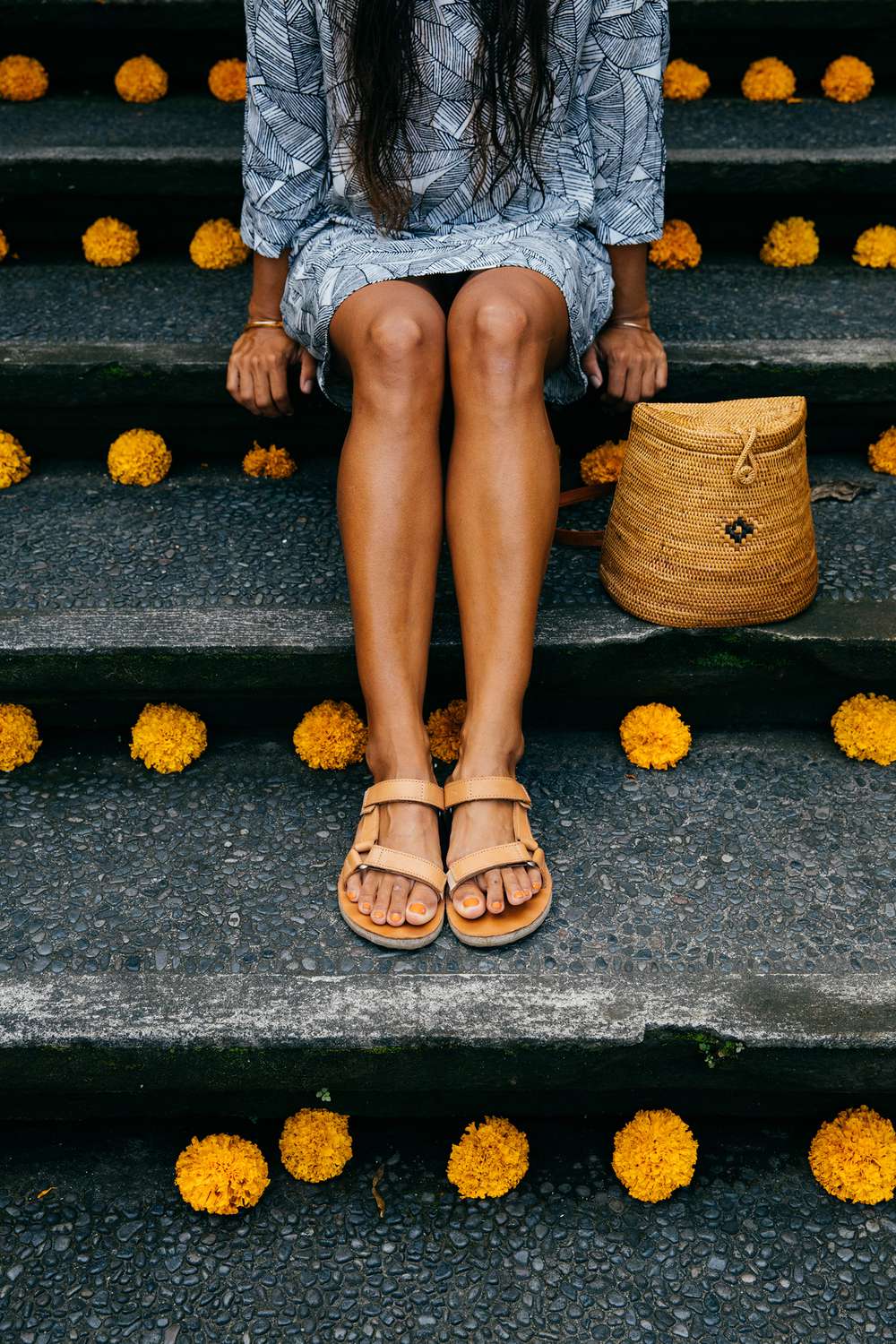 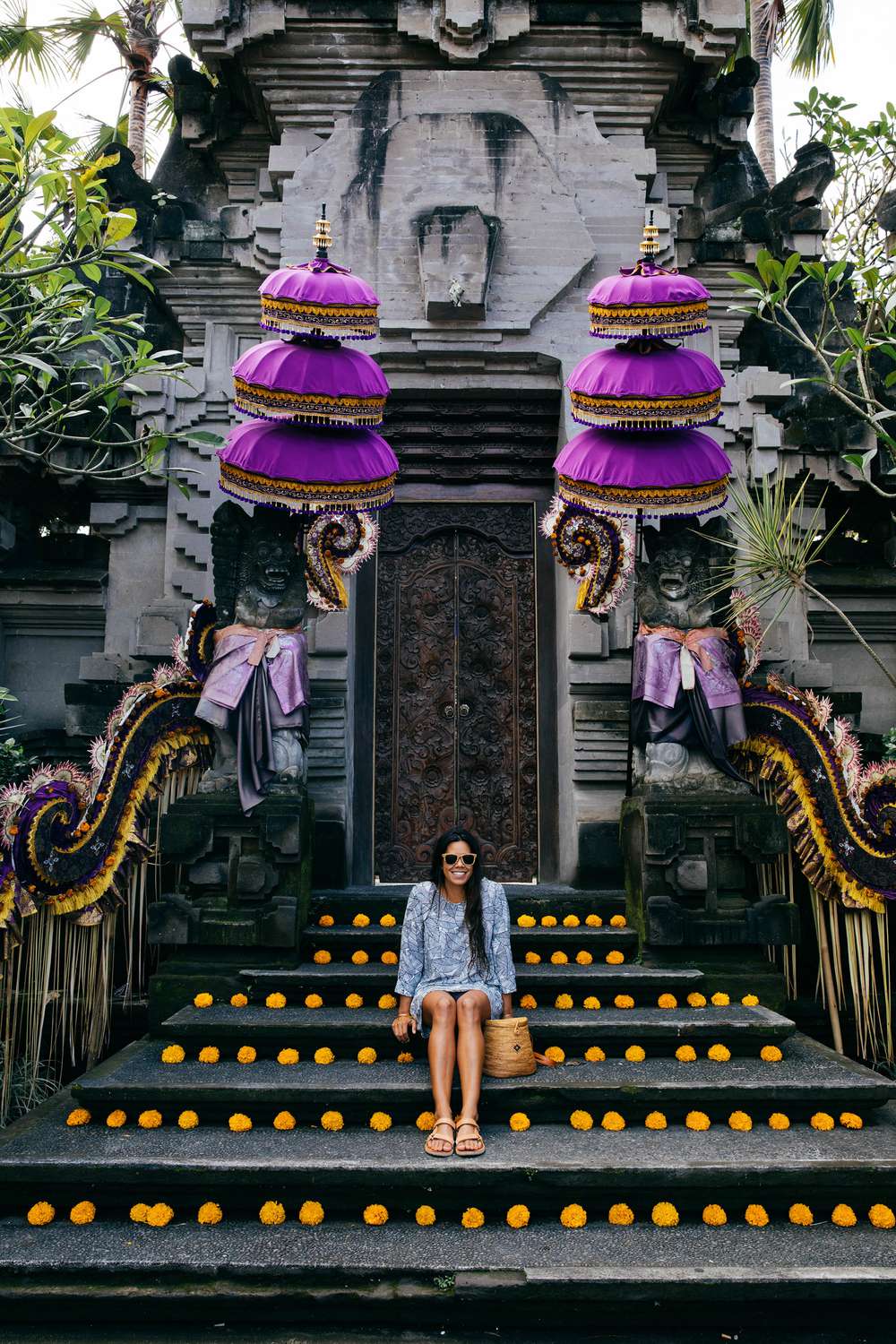 We use way too much plastic

Eight tons of plastic are dumped into ocean every year. Eight tons. As I am writing this, 4,645,034 tons of plastic waste were dumped into the ocean so far this year (according to The World Counts.) That’s not even considering the amount of waste going into landfills. And according to recent studies, it’s estimated that there will be more plastic in the ocean than fish by 2050. Plastic is unnatural, not bio-degradable, and it will never go away. It is forever.

Once you’re aware of plastic use you will realize it is everywhere. Everywhere.

Unfortunately, when you travel to countries like Indonesia where the water isn’t safe to drink, plastic use is inevitable, but that doesn’t mean you have to continue using one-use plastic in everyday life. I always travel with a water bottle and re-fill it with “safe” water whenever I can. And I’ve gotten into the habit of ordering all of my drinks in a paper cup and specifically ask for no plastic lids or straws. I also like to avoid eating at places that serve food and drinks with plastic flatware and plastic or Styrofoam to-go containers. Sadly, most people look at me like I’m weird when I try to avoid one-use plastic. But I hope my neurotic anti-plastic behavior will rub off on other people, too! Let’s make plastic uncool, because it is.

Shop the styles featured in this story at Teva.com, and #StrapIntoFreedom on Instagram @Teva!