Photographer Gretchen Powers and her wife Kaleigh give gratitude to the individuals that supported their queer journeys towards acceptance and feeling safe in their communities. Words and Photos by Gretchen Powers.

Dear Pride, Thank you to the millions of LGBTQ+ people who have stood up and fought continuously for equality. We still talk about how easy it was on the day we applied for our marriage license at the Portland Maine City Hall. We filled out our forms and each slid over a twenty dollar bill to the clerk. We grinned at each other and took a moment of gratitude that something so simple was not legal when we first started dating in 2011. 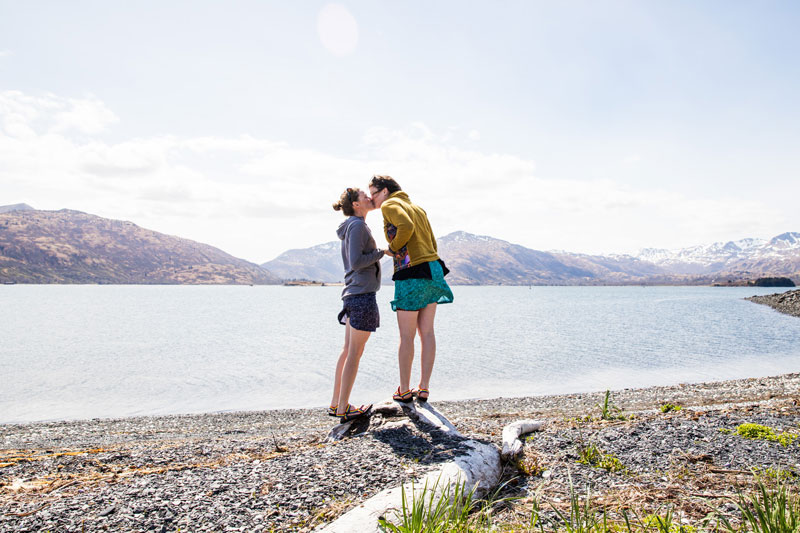 “No union is more profound than marriage, for it embodies the highest ideals of love, fidelity, devotion, sacrifice, and family. In forming a marital union, two people become something greater than once they were. As some of the petitioners in these cases demonstrate, marriage embodies a love that may endure even past death. It would misunderstand these men and women to say they disrespect the idea of marriage. Their plea is that they do respect it, respect it so deeply that they seek to find its fulfillment for themselves. Their hope is not to be condemned to live in loneliness, excluded from one of civilization’s oldest institutions. They ask for equal dignity in the eyes of the law. The Constitution grants them that right.” 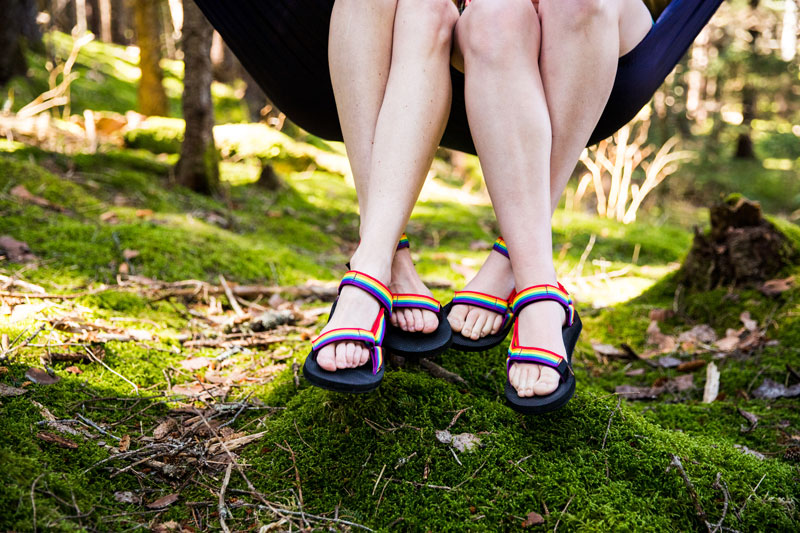 We are reminded daily of the Supreme Court decision and Justice Kennedy’s words above because they are printed in rainbow colors (of course) and hang proudly in the center of our living room wall in Kodiak, Alaska, where Kaleigh is stationed as part of the US Coast Guard. Printed at the bottom are two dates: June 26, 2015 (the date same-sex marriage was legalized in all states) and November 26, 2017 (our marriage date just two years later). We never want to forget the privilege we have to be married and the work it took generations of LGBTQ+ folks and allies before us to get to this place in history. 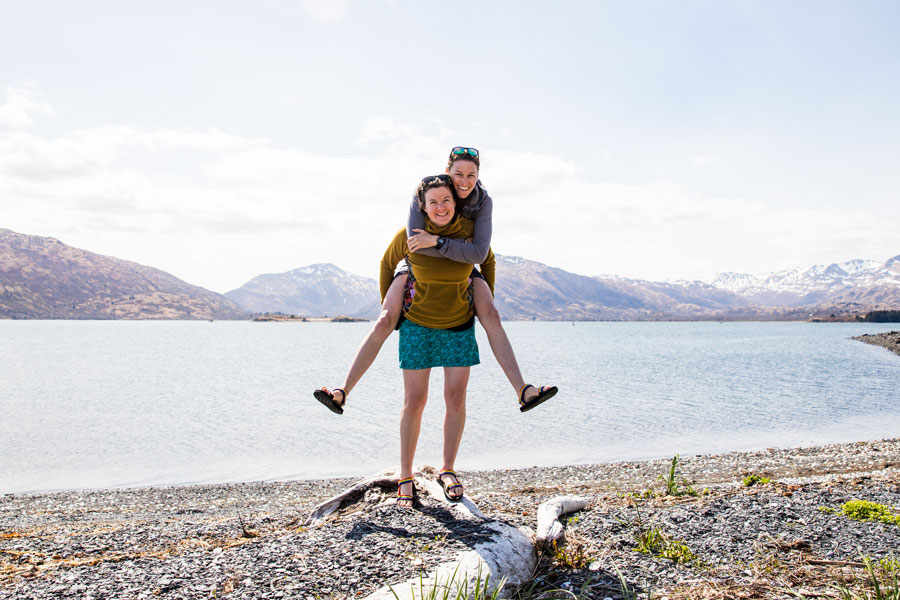 This year for Pride Month we wanted to write some thank you’s to a few folks who have been instrumental in our queer journeys to find acceptance and build communities where we feel safe.

Dear Teva, When we were asked to share our coming out story for this year’s Pride Month, we thought about an Instagram post that @teva posted on Valentine’s Day 2019 which featured us kissing. As a photographer in the outdoor industry, it is profound to note that the inclusion of same sex couples in outdoor social media content and advertising is almost as new as gay marriage itself. Thank you for making space for us and couples like us on your media platforms; for allowing us to truly be ourselves and share our stories with folks who love your strappy sandals as much as we do. 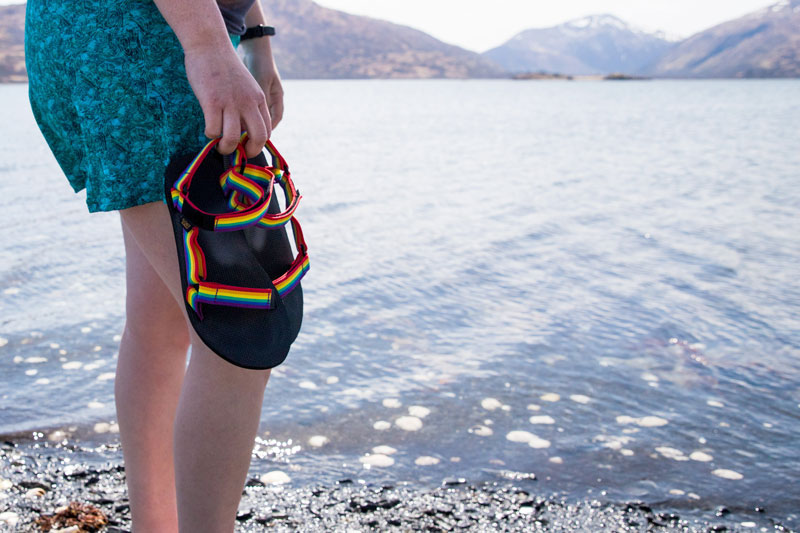 Dear Wood/Woodman/Powers/Salay/Bernardin Families (Our biological families), Thank you for asking questions, accepting us and some of you who even knew we were gay before we did. Your support and love was paramount in our coming out journeys.

Dear Buko (Kaleigh’s study abroad friend in Nepal), Thank you for interrupting my snake game on my Nepali Nokia phone. You called and most likely ruined my high score but you trusted me enough to tell me about your girlfriend. Our shared gayness brought us closer halfway around the world in a country where being gay was not accepted.

Dear Minaji (Our study abroad teacher in Nepal), Thank you for knowing and loving us anyway in a country and culture that didn’t. 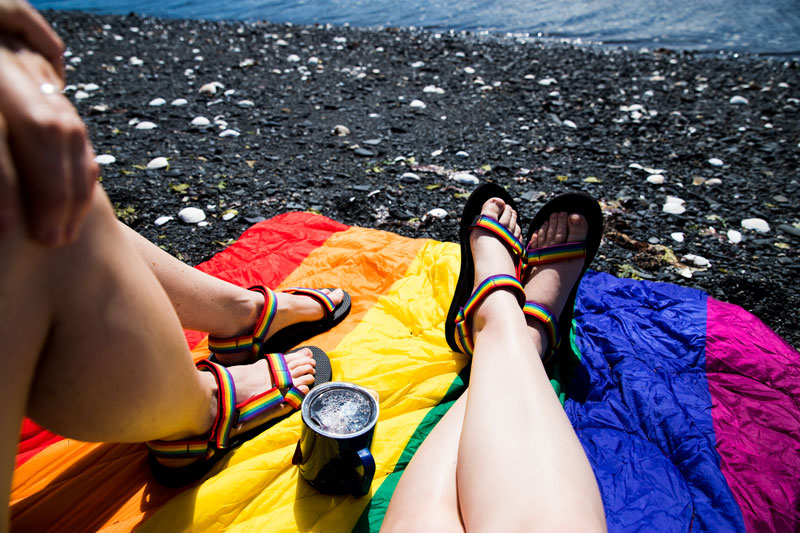 Dear Dominique (Gretchen’s little sister), Thank you for grinning at me and giggling, affirming that Kaleigh had in fact asked me out when she texted, “Hey, do you want to get coffee and cookies, like just you and me?”

Dear Aunt Cin Cin (Kaleigh’s aunt), Thank you for having the best darn reaction to me coming out to you in the Atlanta airport. I still remember you saying, “About damn time we have a gay member of the family!”

Dear University of Vermont (UVM) Allen House, Thank you for always providing a safe place on campus for LGBTQ+ students and for supporting our ideas and actions to make UVM more inclusive.

Dear Joe (Gretchen’s friend from camp), Thank you for giving me courage. While we drove to visit the conservative Christian summer camp where we both used to work as counselors and filmmakers, coming out to you on the backroads of Colorado under a double rainbow was terrifying but also gave me the strength to face a group of friends I suspected I would lose for just being who I am. 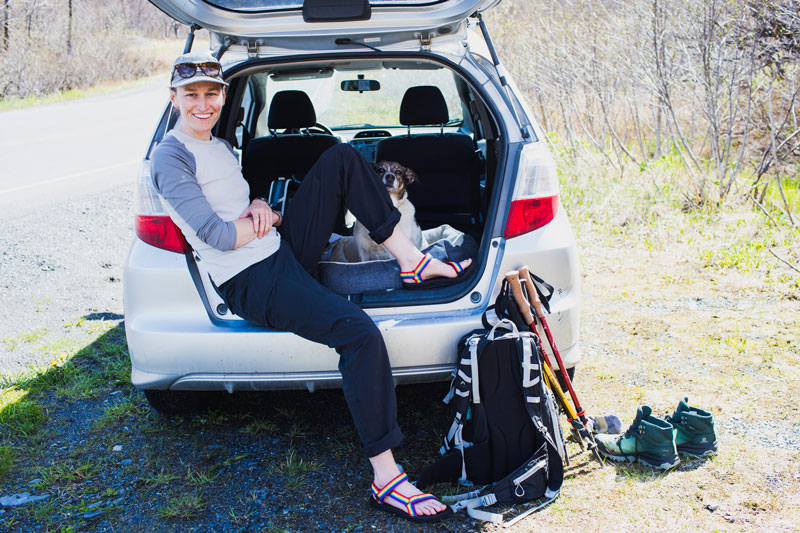 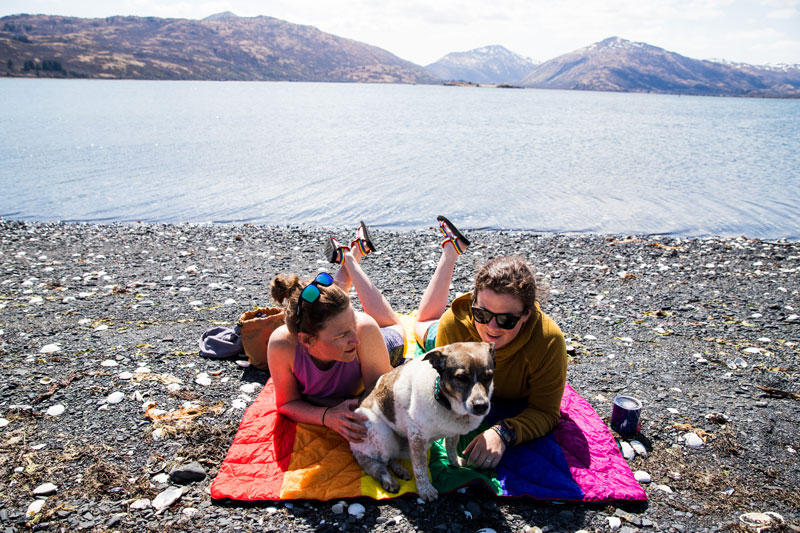 Dear Wyn (and Pattiegonia), Thank you for picking up that pair of boots again and creating so much space and conversation within the outdoor community—as well as teaching all of us that hiking poles are meant for dancing on mountain summits.

Dear Ricky Sr (Kaleigh’s shipmate’s father), Thank you for proving me wrong. When I met you, a man from my home state of Georgia, I assumed you would not be accepting of my family but instead you simply said, “So you got a wife? I think we all just need to be a little bit more open and let others love whoever they want.” 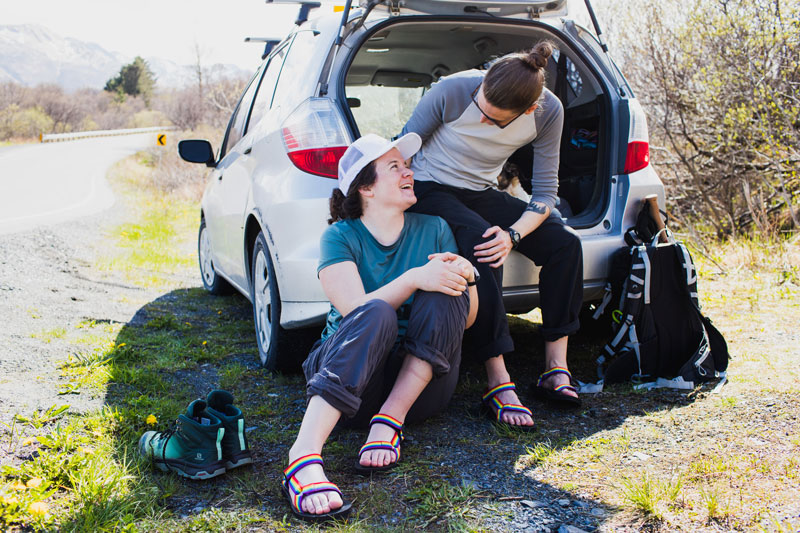 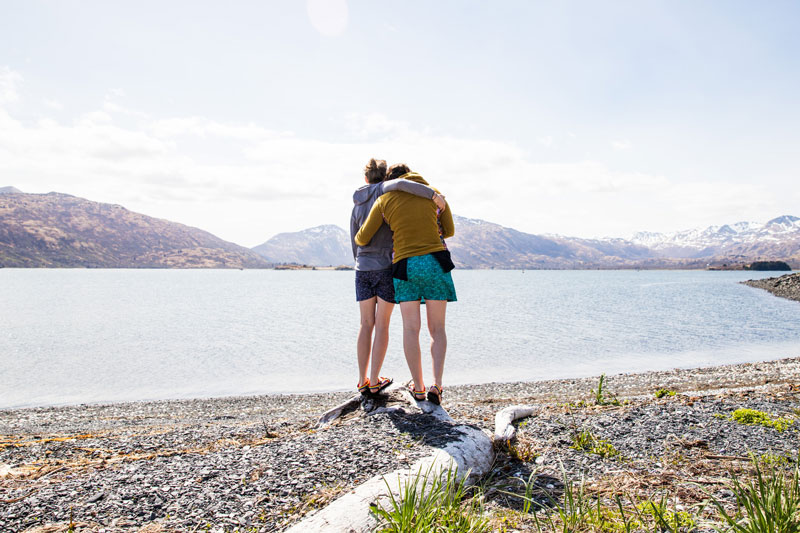 Dear Dan Levy (co-creator of Schitt’s Creek), Thank you for creating a television show that perfectly summed up sexual orientation with bottles of wine and showing a relationship as it is—just two people loving each other.

We are emboldened by the love of this community. As we sit in rooms full of boxes, packing to move from Alaska to Hawaii, the thought of moving to a new place is always extra nerve-wracking because we know that there is still a long way to go to acceptance and equality for the LGBTQ+ community worldwide. We are glad that we have more strength than fear and more excitement than trepidation—and we have our family, Kodiak community, social media friends, and US Coast Guard crew to thank for that.

With love and hope, Gretchen & Kaleigh 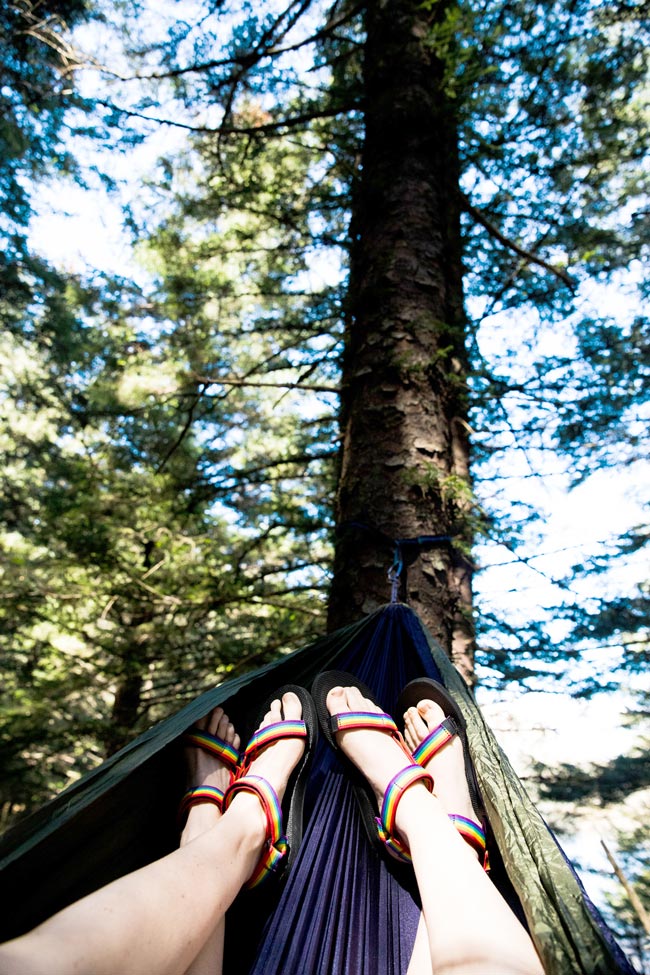 In celebration of Pride, Teva partnered with the It Gets Better Project to help further their work of uplifting LGBTQ+ youth across the world through storytelling. Shop the Rainbow Pride Pack at teva.com.