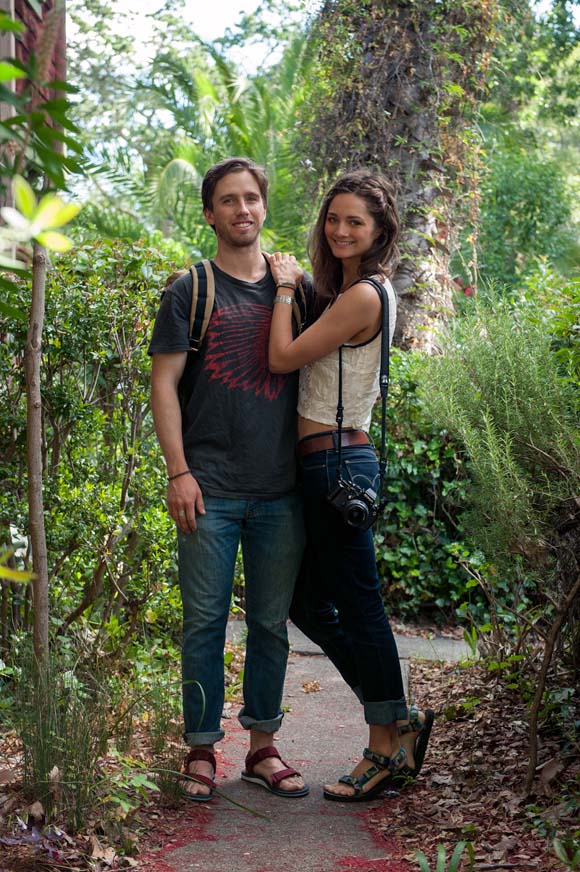 When it comes to couples who own their style, we might have to give the gold medal to West Marin, California, couple Meg Haywood-Sullivan and Charles Post. They are living proof that style isn’t just about what you wear—it’s how what you wear can be an extension of who you are. Their earthy, easy looks are the result of a life spent stowing surfboards in the back of Ford trucks and quiet afternoons studying wildlife. But that’s not to say the photographers and ecologists don’t know how to party—they’re live music aficionados with a serious appreciation for all genres of tunes. Here, they share the music that keeps them moving (and two festival outfit ideas that will keep you comfortable in the front row at Bonnaroo—and wherever you decide to go next).

Charles: Sierra Nevada World Music Festival. Every summer some of best reggae and folk bands come out of the northern California wood work to spend a weekend marinating in Booneville. This festival is often thought of as a family friendly festival because it’s pretty mellow—drinking and partying isn’t the key priority of most festival-goers; relaxing in an open field while listening to some good tunes seems to be the prerogative for most. Furthermore, there’s always a pretty epic pick-up soccer game between each set!

What does music mean to you and how is it important in your life?

M: There’s nothing better than listening to some good music to get the creativity flowing. Jamming out to good tunes is one of the highlights of my daily routine, from keeping me inspired while I’m editing photos, to pumping up the mood for my team on photoshoots and being the perfect background for epic road trips.

C: Music provides an escape. After a long day of work, or an epic drive, it’s nice to unwind with some tunes, be it The Beatles, Bob Marley or some good ol’ country music.

What is your go-to festival outfit?

M: I like to keep it simple and comfortable. A pair of Teva sandals, a pop of color, and my mom’s turquoise cuffs from the ‘70s.

C: Board shorts, sandals and a broad-brimmed hat, and a soccer ball. Pick0up soccer or juggling sessions always bring together an eclectic sort of folks, all stoked to kick the ball around and listen to some good tunes.

Tell us about the best road trip of your life (so far):

C: Last spring, I was hired to run a bird research station in southern Utah. I meandered through the Sierra to link up with a good friend in the eastern Sierra, where I spent the next few days exploring the local hot springs and high alpine lakes that dot the Ansel Adams Wilderness. And of course I brought my fly rod, so I spent plenty of time waist-deep in the cool, cold streams that feed lake Crowley in search of trout. After a few days in paradise, I decided to split and hightail it across Nevada to Great Basin National Park. After an epic day of exploring new trails and creeks, and getting a chance to see the park’s bristlecone pine, some of the oldest trees on earth, I settled in for my first night. Shortly after sunset, I began to realize why the park’s slogan is, “The Park Comes Out After Dark”; the stars and night sky are out of this world, and attract astronomers and star gazers from around the world. Next, I made the final drive to Arches National Park in southern Utah, where I spent close to two months studying migratory birds.

M: My favorite road trip has to be the one Charles just mentioned. To add to it, one of my favorite moments during the trip was pulling off the side of the road in Zion after driving all day through the scorching Utah desert. We had just made it to the park as the last light was dropping behind the mountains. Charles and I hopped out of the car and shimmied down a gully to a creek. It was still hot even at dusk, so we stripped down and plunged into the warm, crystal-clear waters. What a magical experience, floating beneath the red rock cliffs watching the sunset.

Tell us your funniest or most memorable music festival, concert or road trip moment?

C: Last winter, Megan and I travelled out to Bozeman, Montana for some snowboarding and adventuring. Having never been there, I was really excited to catch a glimpse of some of Montana’s wildlife, especially the herds of buffalo and elk I had heard so much about. After pulling off into a snowy field, I quickly grabbed my binoculars and camera. I noticed a large fence in front of me, but was too excited to pay much attention to a small warning sign to my left. As I placed my binoculars on the closest fencepost to steady my excited hands, I leaned into the fence, and quickly realized I should have read the fine print on the sign. Within the blink of an eye, I had been shocked by a buffalo grade electrical fence, and was knocked flat on my back and into a pile of snow. I was lying there thinking… what the heck just happened. After a few moments, I looked down at my leg and saw a singed line that marked where the wire had burned my leg. After a few moments, I shook the snow off myself,  took a few deep breaths and laughed it off. I guess I should remember to stay calm and assess a situation before jumping into wildlife viewing mode! 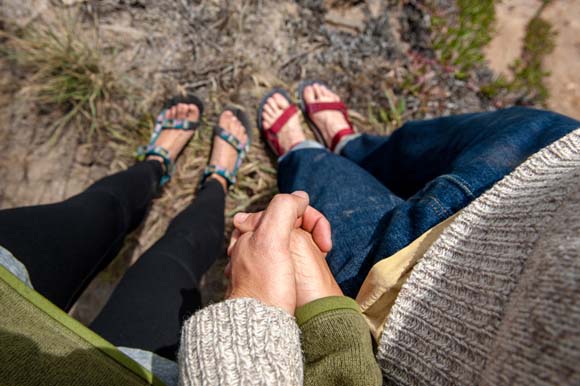 M: “Over The Hills And Far Away” by Led Zeppelin

M: “In Every Direction” by Junip or “Kong” by Bonobo. I’m a big fan of both Junip and Bonobo when I am editing photos early in the morning.

M: TV On The Radio

C: Maybe the band that played at my high school prom.

Musician or band you most want to hang with:

M: The Beatles or Bob Marley.

If you could have any song play every time you enter a room, which would it be?

What keeps you feeling creative and inspired?

M: Salt water and the open road. Surfing is my creative reset button and traveling opens my eyes to the inspiration around me.

C: The outdoors. Every time I get a chance to unplug and spent time outside, I immediately feel recharged.

What’s the best spontaneous adventure you’ve ever had?

M: After a long winter on the road shooting snowboarding, I decided to pack my bags and move from my home in Bozeman, Montana to southern California. I was in Whistler at the time, so I drove 14 hours through the night back to Montana, packed up my house, bought an old Ford truck a few days later, and started the journey down the coast. I was officially homeless and had no plans where to live besides the back of my truck. In San Francisco my truck ultimately broke down, and luckily a mutual friend put Charles in touch with me. Here we are today, two years later thanks to that spur of the moment adventure and my old cherry red F150.

C: I told myself I would start 2014 on the road, so I woke up and drove north. After almost a month, I had made it to Canada, after exploring some of the most beautiful country I’ve ever traveled through.