With a toddler in tow, Tara Rock trades in her whirlwind travel speed for nap times. Hear how slowing down uncovered deeper insights about forests—and herself—than she expected. Words and Photos by Tara Rock.

When tickets to Vancouver are only $375 round trip from Hawaiʻi, you book a trip. This was the first time we were using our passports together as a family and I know, it is just Canada, but it was a big deal to us.

We aren’t really big planners. We like getting local perspectives and booking the rest of the trip along the way. We picked a place to stay in Tofino and thought, “let’s hit up Whistler or maybe even Banff?” A few days in, we realized that it was too ambitious. Pre-child it would have been no problem, but half the trip was centered on his sleep schedule. I always joke I have become a “slave to sleep” now. Did we travel all the way to Canada just to tiptoe around our baby’s nap times? 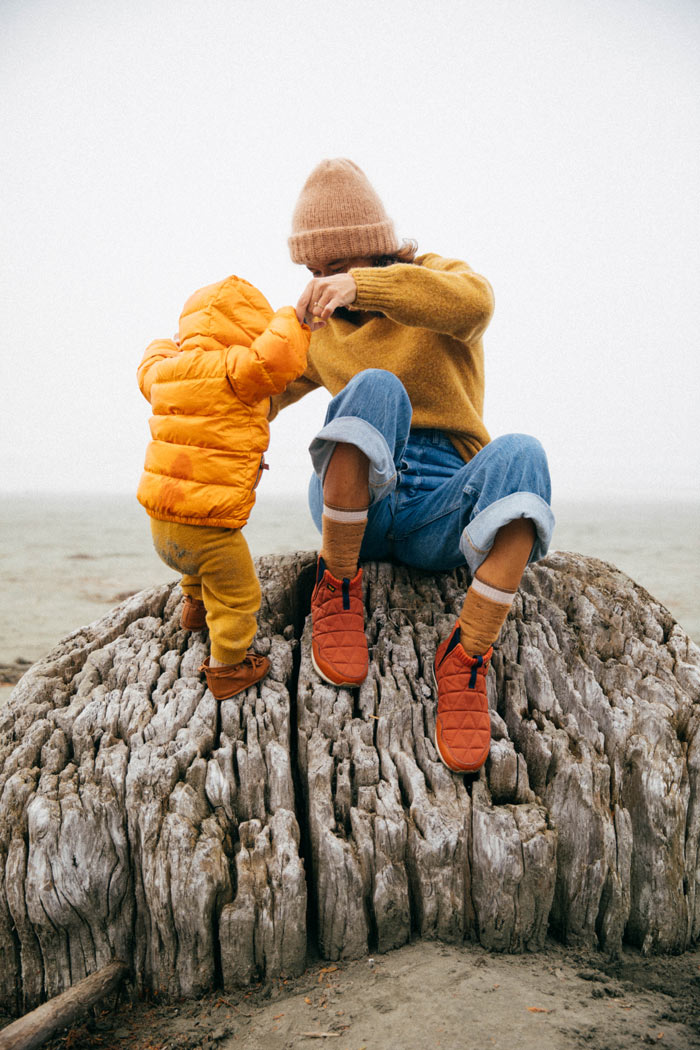 Maybe. But I actually like to travel slowly. I enjoy being in a place long enough to feel a little bit like a local. We ended up spending all our time on Vancouver Island and I still feel like we could go back to Tofino for a surf trip every fall and explore new places.

Growing up and surfing in Hawaiʻi is just so different. We have warm water and coconut trees. And I never really have to worry about gear other than making sure my bikini isn’t sopping wet for the next surf session (I hate putting on wet bikinis!). Tofino has cold water and big free trees. And you need gear. A lot of surf gear.

It was the first time I surfed with a hood, gloves and booties. I thought I would be miserable, but it actually wasn’t that bad. And even though I was kinda kookin’ it (I tried to blame it on the board rental but it was probably just me), I really embraced the whole experience. The waves were small, glassy little trimmable peelers and the crowd was really mellow. The same dudes that helped pick out my gear at the surf shop were the same dudes I surfed with. And don’t tell anyone but I peed in the rental wetsuit. Mom bladder, am I right? 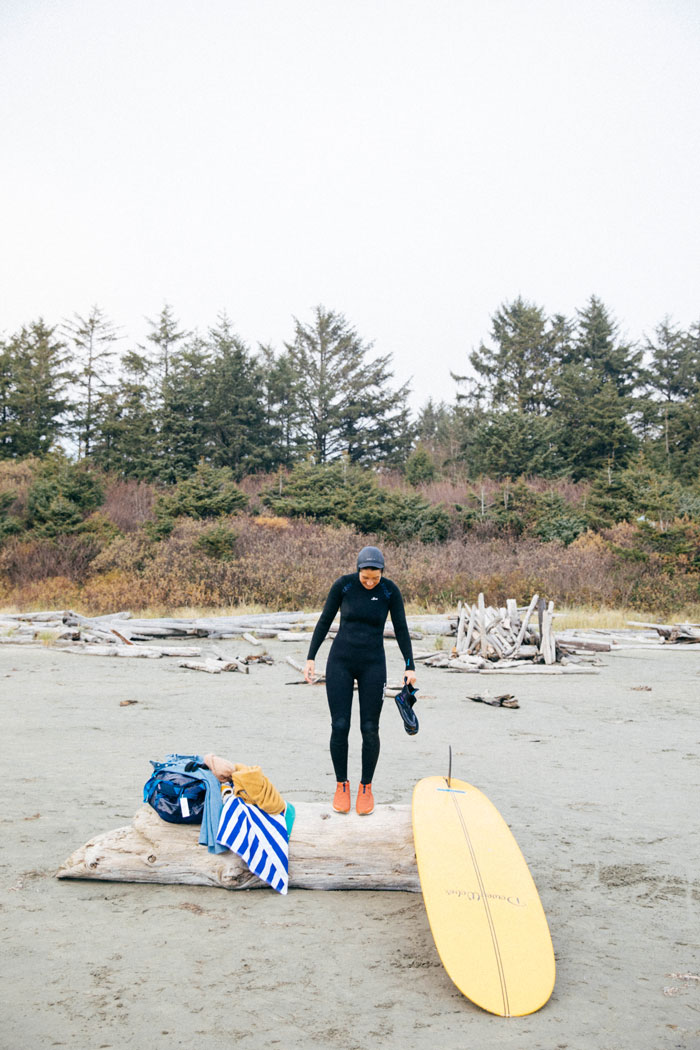 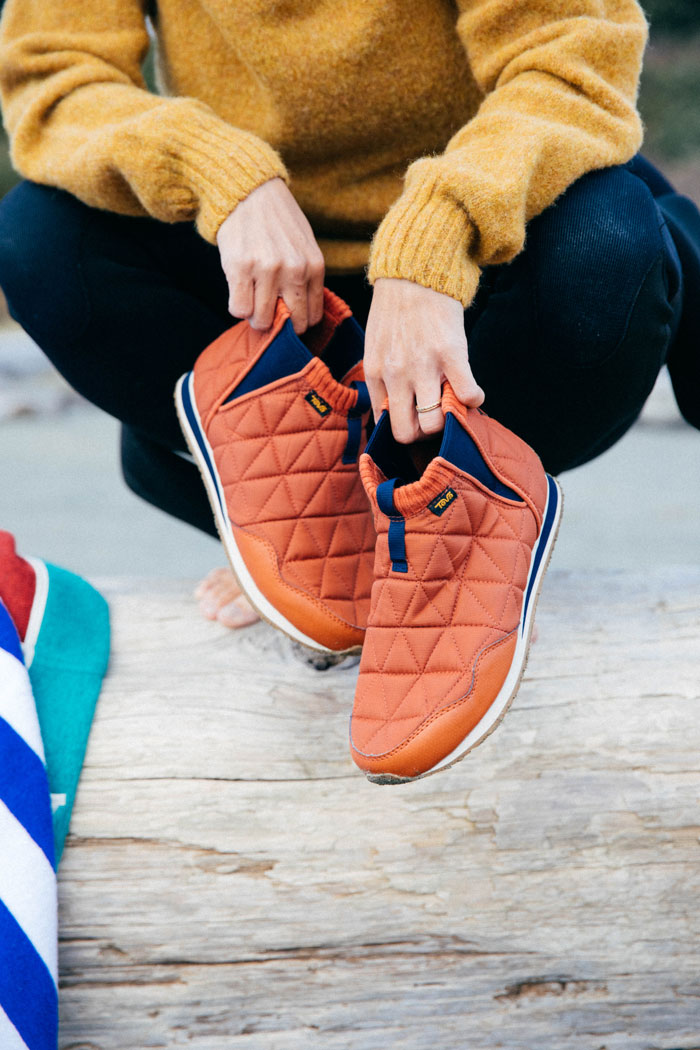 “The Ember Mocs and Ember Mids were the perfect shoes for our trip. Warm, cozy, and easy. I hate fussing with laces and both were so easy to slip on and off.” 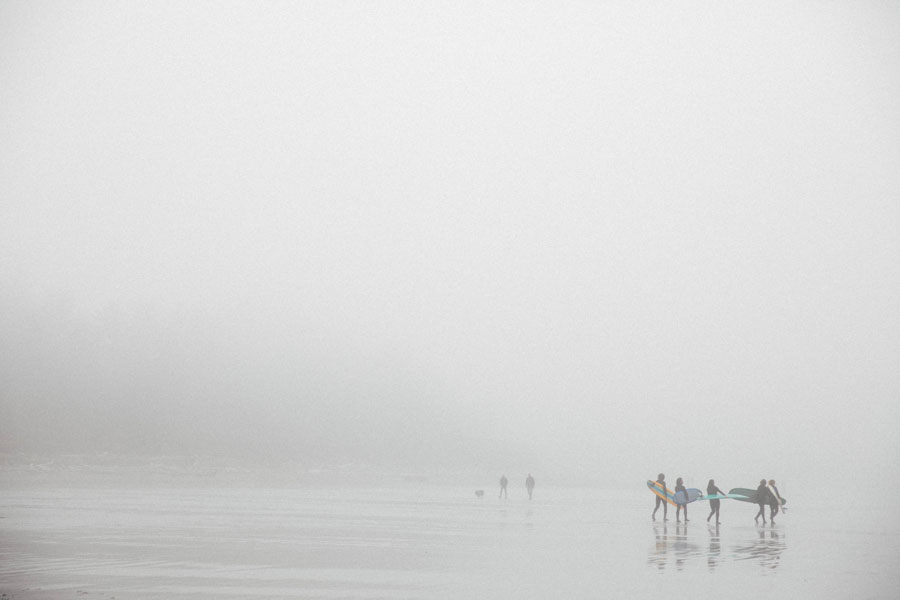 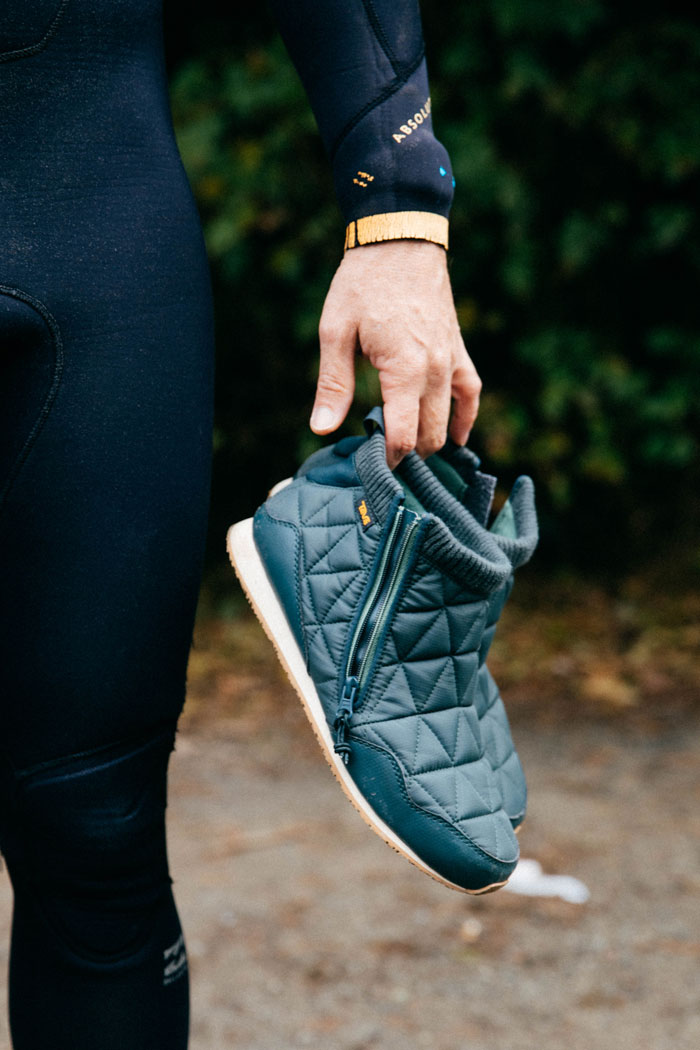 I only started hearing about Tofino a few years ago since it’s become a tourist and surf destination. But it wasn’t like that before. For decades, Vancouver Island’s main industry was logging until First Nations (and a few non-profit groups) held one of the largest nonviolent protests in the history of Canada in 1993. The event is now known as the Clayoquot Sound protests or “War in the Woods” in which over 900 people were arrested. It received worldwide media coverage and really shook things up, changing forest policy. What’s crazy is that Canada had (and still has) pretty poor laws regulating the commercial logging industry and protecting trees that would be considered “ancient growth.” 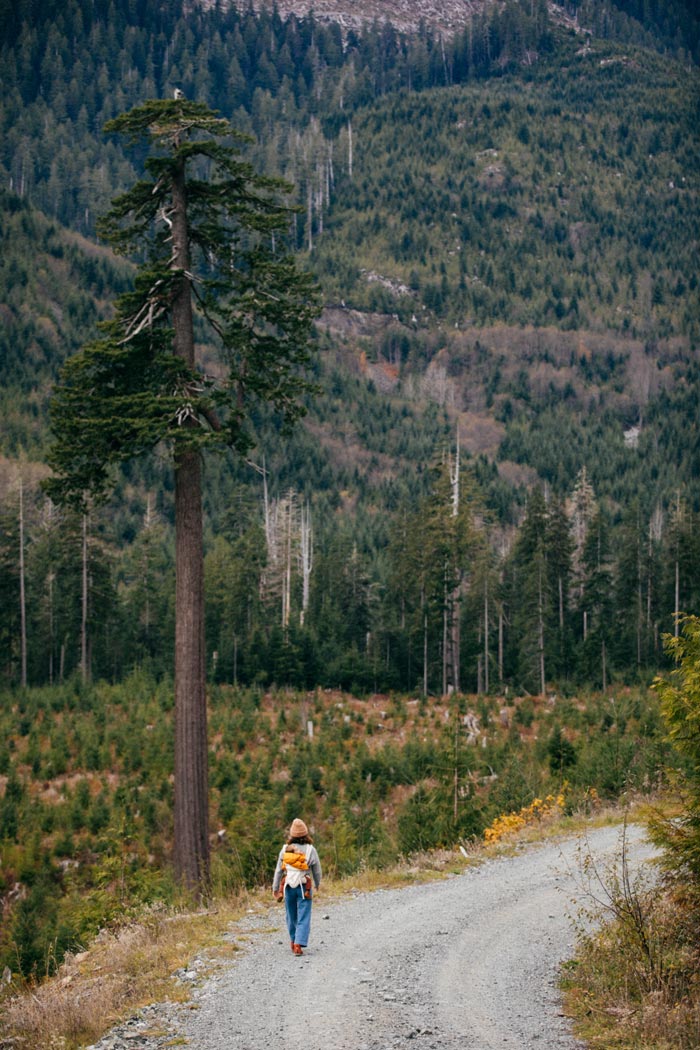 In Port Renfrew, the economy is shifting from logging to eco-tourism. 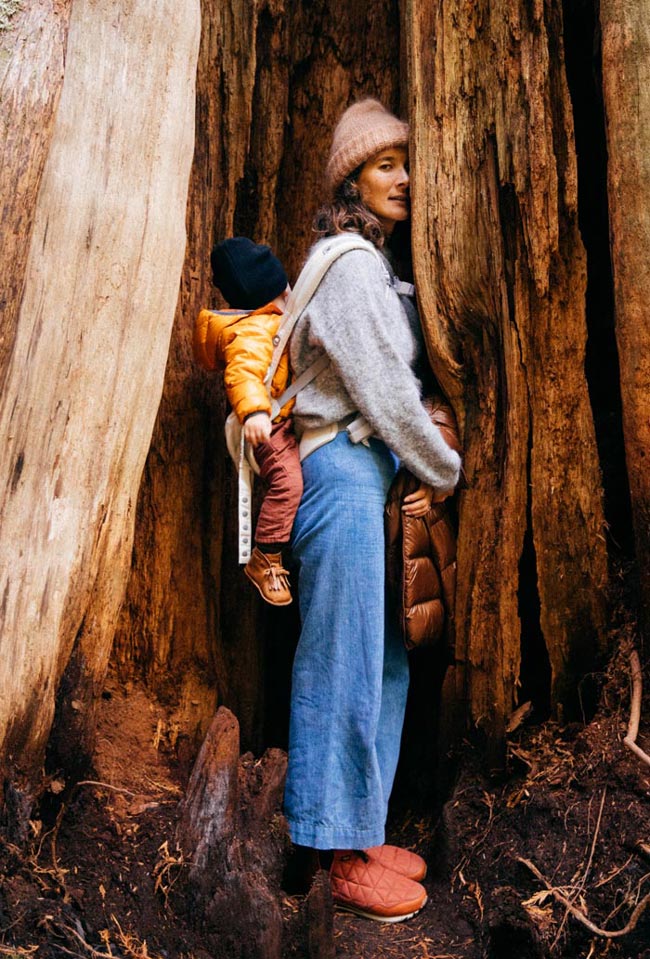 But it’s still happening all over Canada. We’re talking about trees that are hundreds and hundreds of years old and huge! As a silver lining, Tofino eventually evolved into a vacation destination and no longer depends on the logging industry. I feel like this little community is the poster child for saving the trees. I’ll take a trendy brewery over cutting down ancient trees any day! 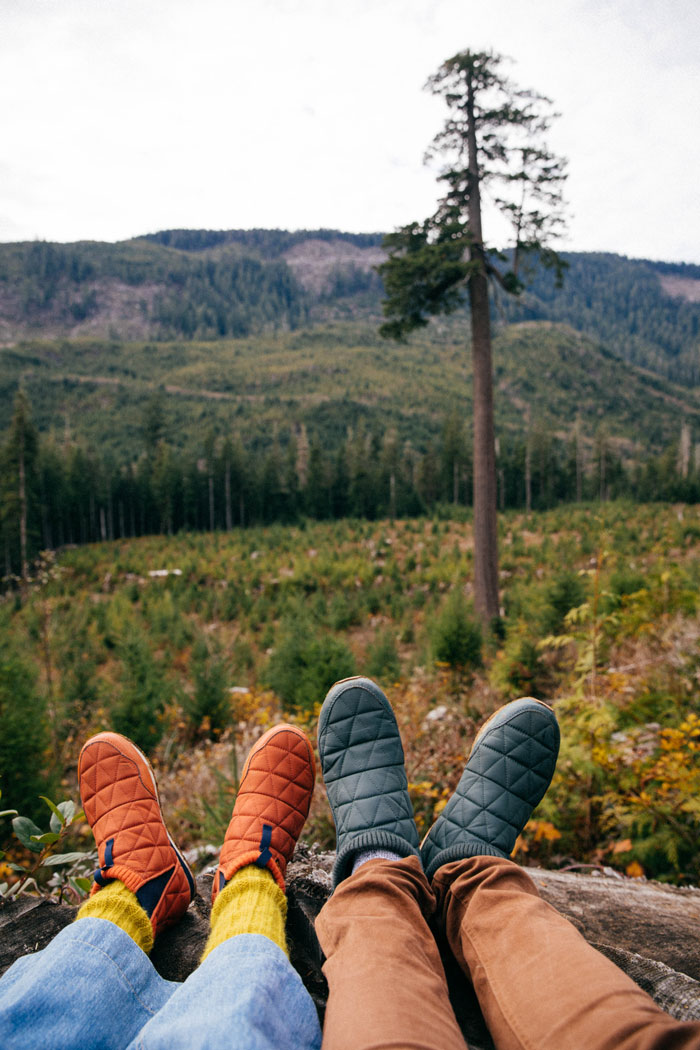 One of our major adventures in Tofino was going to the Hot Springs Cove, which is only accessible by boat or seaplane. I got the worst motion sickness and my breakfast came up at the end of our 1 ½ hour boat ride. Luckily the cool air and 30-minute walk to the hot springs cured any remaining queasiness.

My seasickness worked out to our advantage and while everyone went ahead of us, we got to enjoy the trail on our own. By the time we got to the hot springs, the thrill had worn off for a few other travelers so the springs weren’t as crowded. Unfortunately, Otis wasn’t too jazzed on the hot water to cold air ratio so Tyler and I had to switch off and spend our few moments of “relaxation” solo.

It would have been nice to soak together (something we would have done pre-baby) but that isn’t even an option for us anymore. With parenthood comes flexibility and sacrifice sometimes. We made it work and had a great time regardless. Nothing like juggling a baby in a bikini with cold air whipping around your body. 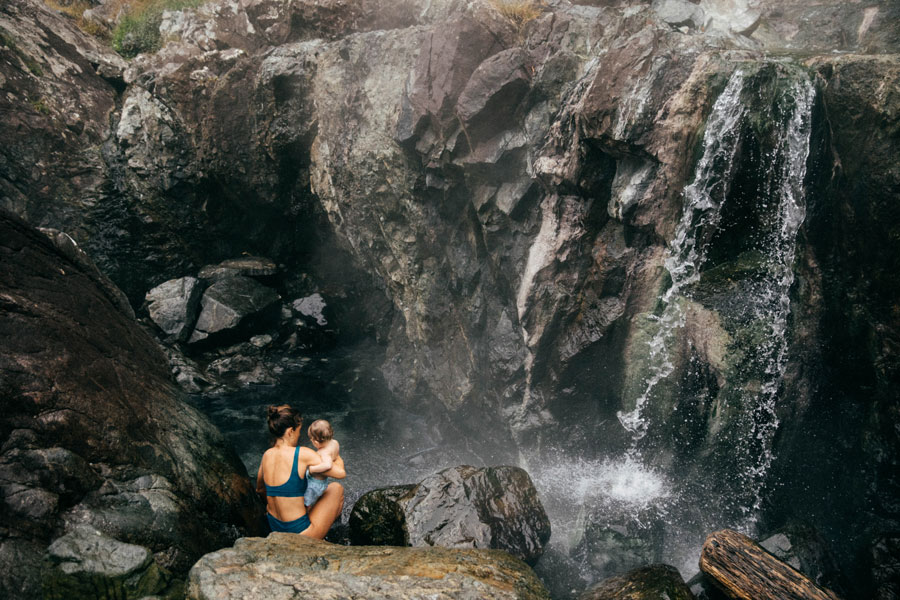 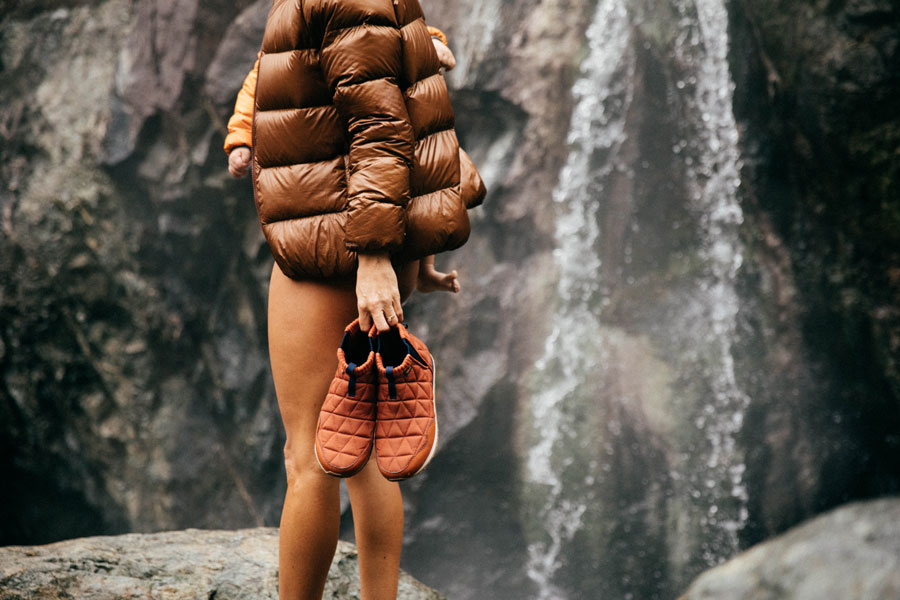 As we hopped back on the road and slowly made our way to Port Renfrew (a place we never heard of but came recommended to us by a local!), the looming presence of the logging industry was all around us. There were roads with miles and miles of beautiful fir trees and then suddenly hit miles and miles of desolation. We had to avoid big logging trucks as they barreled down two-lane roads towards us. This is where we found out about Big Lonely Doug: a single, old-growth Douglas Fir that was spared from the chainsaw. 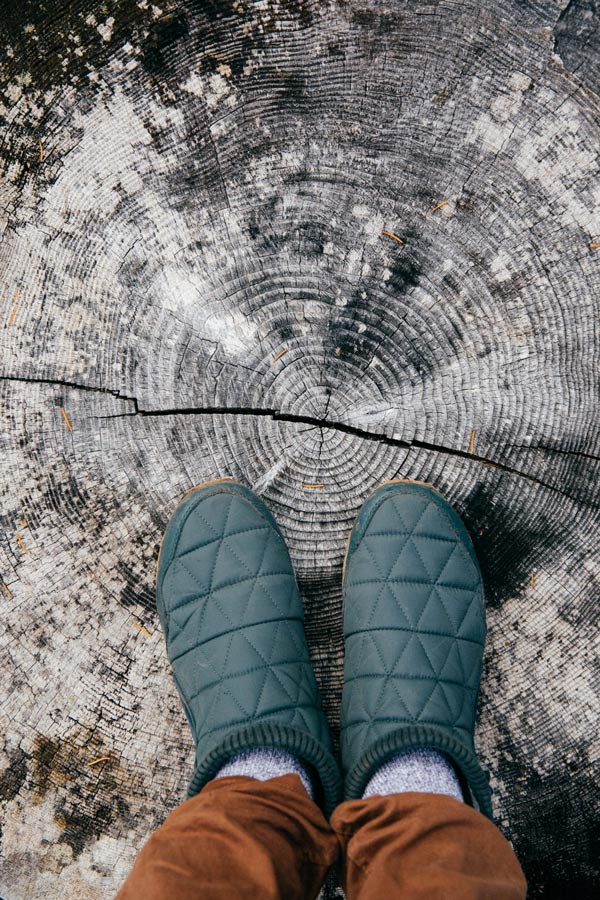 While we sat there and stared at Big Lonely Doug, I recognized that we are a part of the problem. As long as there is a demand, they will keep chopping trees down. I’ve always been mindful of my consumption, especially with plastic, but I never really thought about timber because it’s not an industry I see on a daily basis in Hawaiʻi. What is the answer to the logging problem? Better laws to protect the trees? More people becoming more conscious and consuming less?

Port Renfrew is trying to shift its industry, similarly to Tofino, from logging to tourism. I actually found a lot of the hikes we did to be a bit underwhelming but that’s better than the exploitation of natural resources any day. 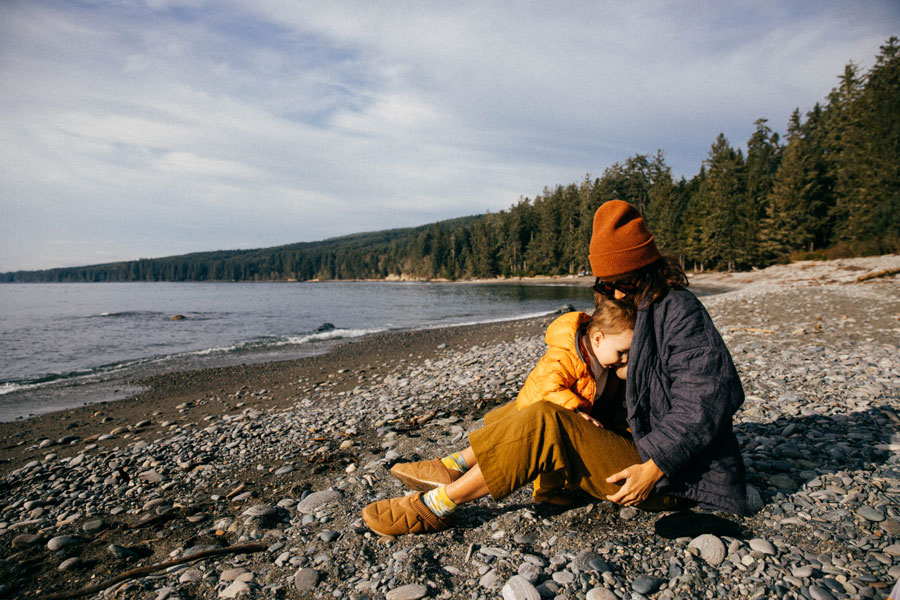 A breastfeeding break with a view. Pictured: Ember Moc Shearling in Pecan. 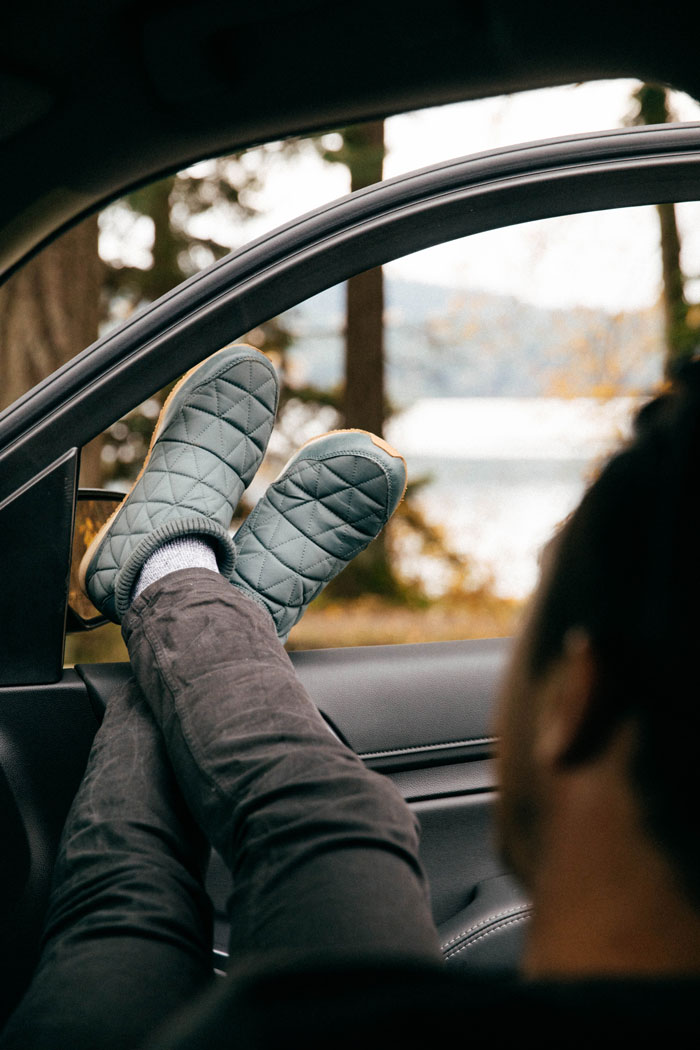 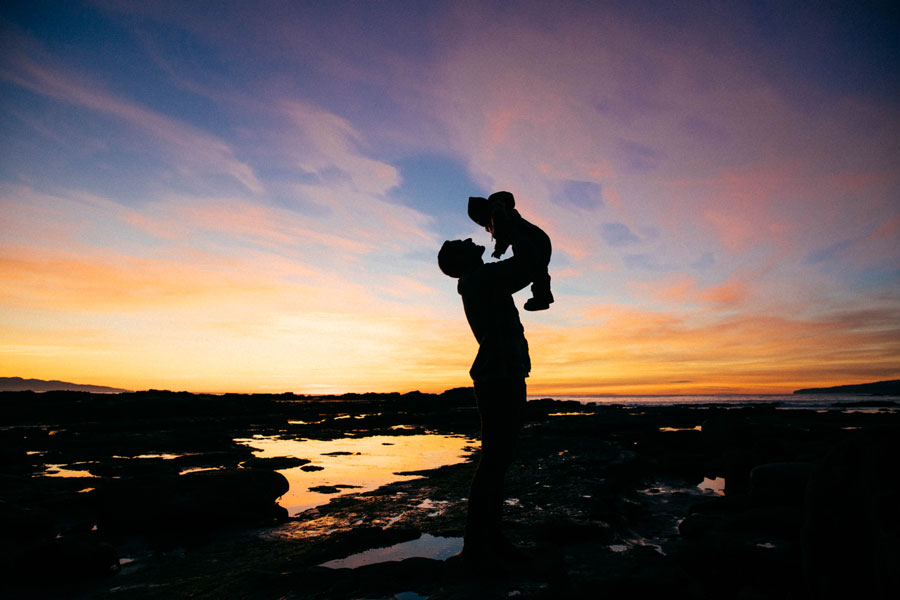 On a creative level, this trip made me realize I can’t photograph our travels the same way I used to. Now all of my attention is on our toddler and making sure he doesn’t choke on a piece of seaweed or run into the road. As we would see new places, I would find myself missing photo opportunities. But it is also important for me to be present in my son’s life. Traveling with a toddler is an adjustment but so fulfilling and worth it. 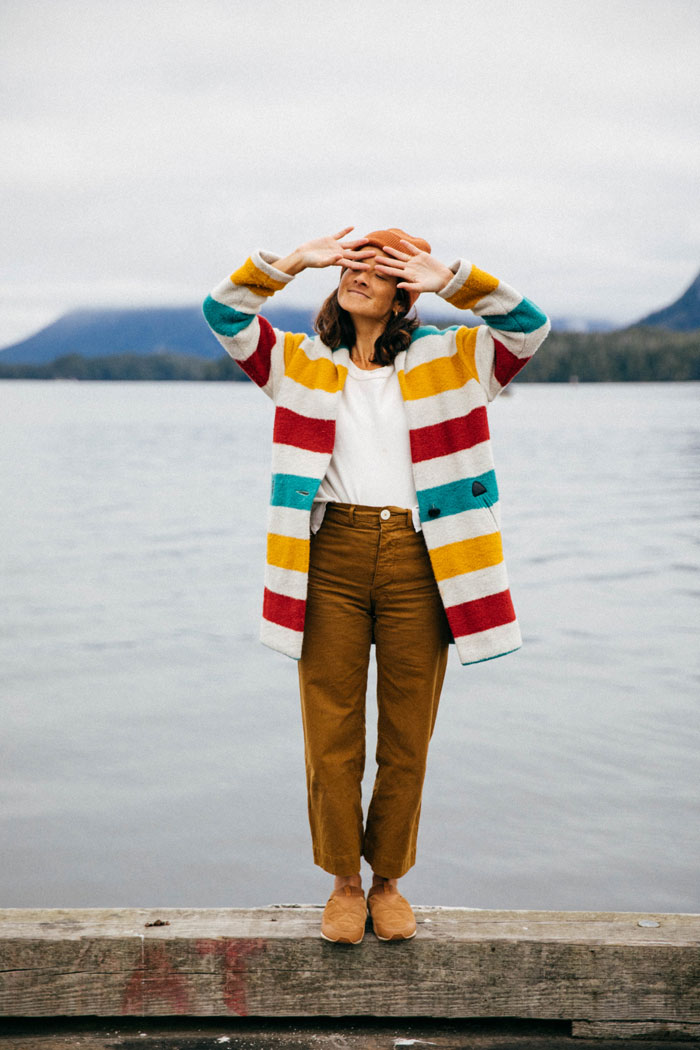 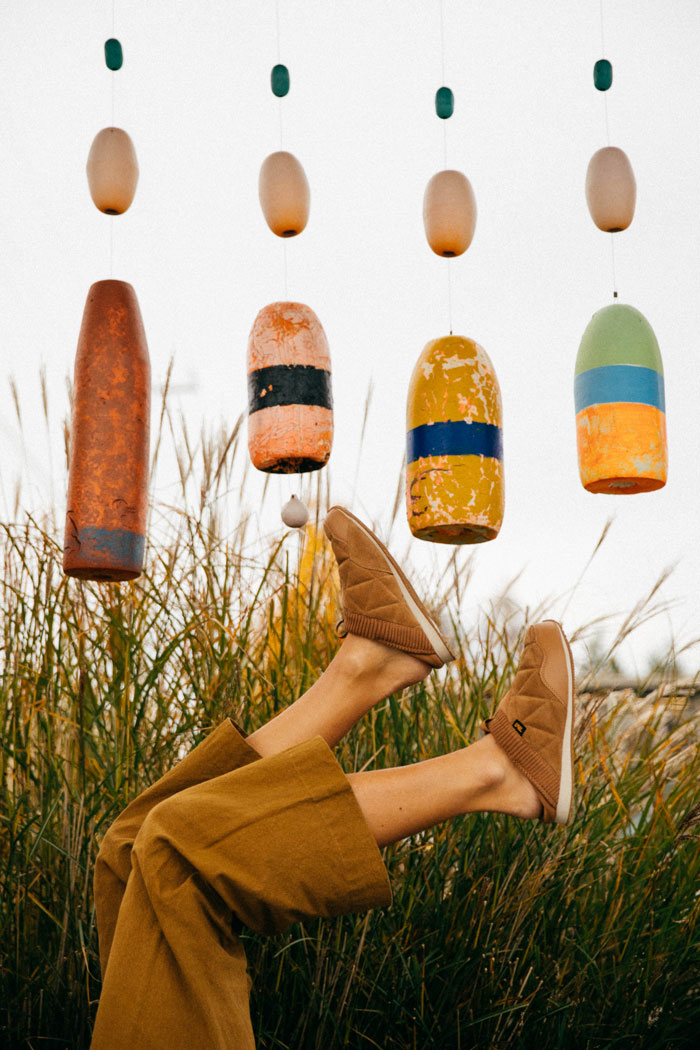 “I am especially jazzed on the Ember Moc Shearling. SO cozy. It was a treat to slip my feet into comfy, plush goodness in the morning.”

Even though I didn’t get an amazing photo of the fir trees in the fog or all the beautiful lakes, I know this is temporary and will find my independence in photography again. I’ll just have to go back so I can get amazing photos of Vancouver Island’s beautiful landscape and support the tourism that’s saving the trees. And I hope that our generation will continue to push boundaries and make some changes so our children can continue to enjoy this beautiful earth and become empowered stewards of the land. 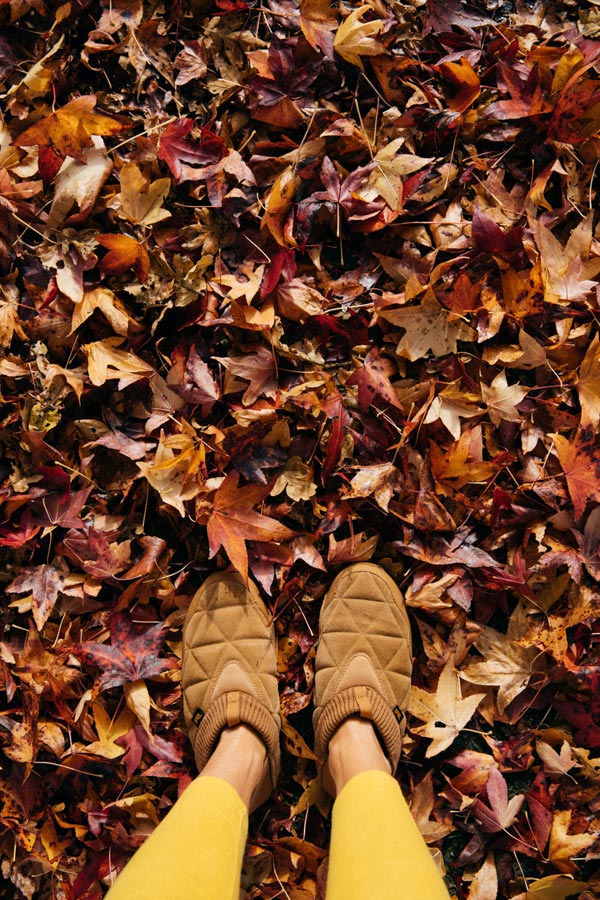