“Carnival season gets everyone outside, no matter their background or socio-economic status,” explains New Orleans-based Teva Explorer, Whitney Mitchell. This year was the 10th time she’s celebrated Mardi Gras in New Orleans.

Carnival season in New Orleans is the major league of Mardi Gras celebrations. The holiday marks the date of the city’s origins: the French-Canadian explorer Jean Baptiste Le Moyne Sieur de Bienville arrived in the area now known as New Orleans on the eve of Mardi Gras in 1699 and thus he named it “Pointe du Mardi Gras.” Since then, the holiday has been celebrated here with enthusiasm and pride like nowhere else.

Mardi Gras is the French translation for “Fat Tuesday” and traces back to European Carnival celebrations in the 17th and 18th centuries. “Fat Tuesday” was the last day to indulge before the official start of Lent, a 40-day religious fast that ends on Easter. Back in the early days of European settlement in New Orleans, secret societies formed to throw masked balls and lead celebratory parades for Mardi Gras extravagance, a tradition that has evolved to over one million locals and visiting revelers parading through the streets.

From meeting up with her friends to design their costumes in January, to the climactic Mardi Gras parades in March, Whitney invites us in on the elaborate season of festivities. 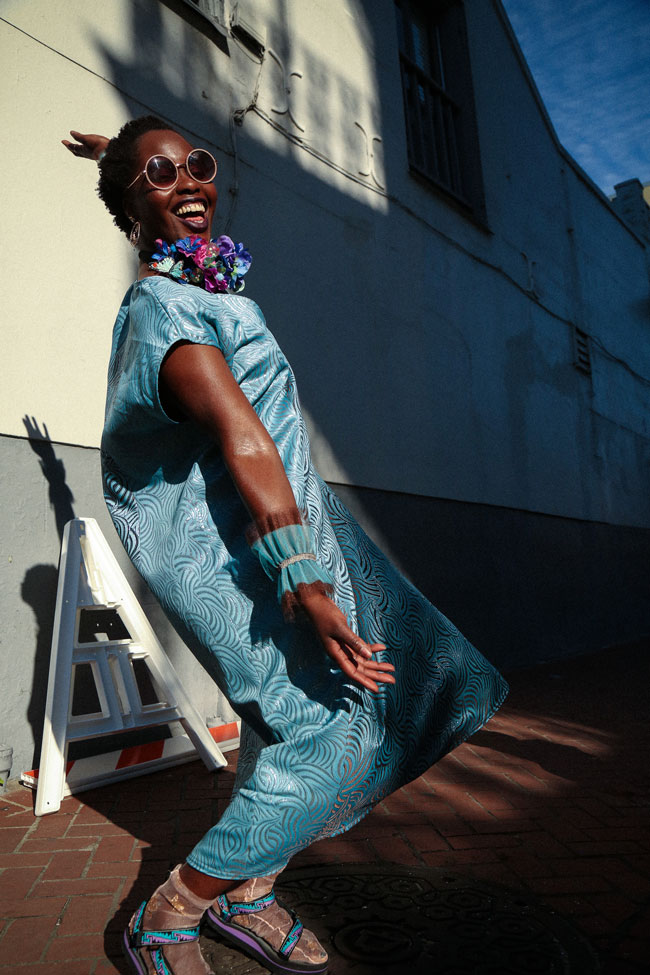 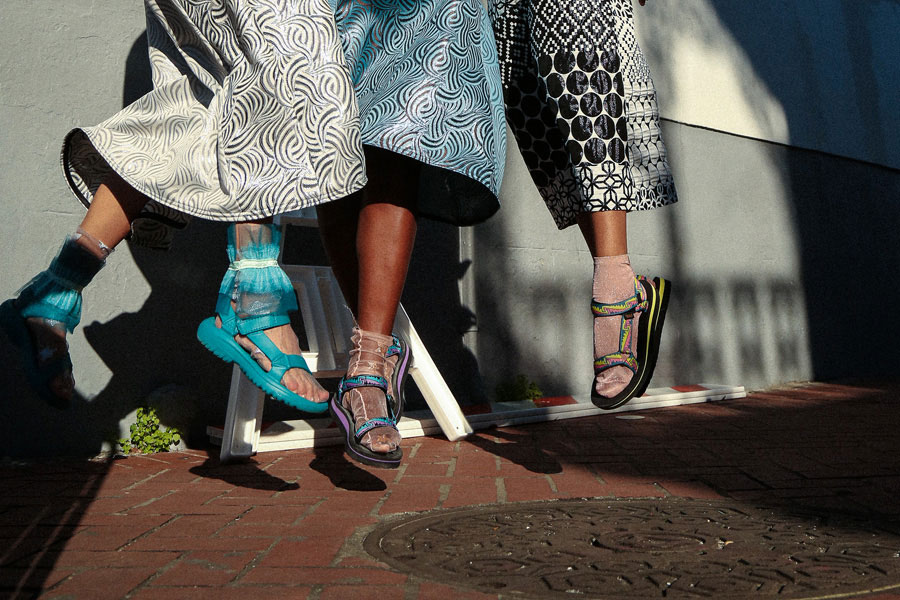 What is the cultural significance of Mardi Gras in New Orleans and what does it mean to you?

Mardi Gras is the culmination of Carnival season. It’s the first Thanksgiving of the year and the real New Year’s Eve. It’s the friends and family reunion that stretches on for weeks. and it’s also the lead-up to an intentional-ish Lenten resolution.

Mardi Gras season starts rolling every year on January 6th, 12 days after Christmas, on the night of Epiphany (a.k.a Twelfth Night). The city is sweetened with King Cake and small parades that fuel the onslaught of road closures and beaded trees that lead up to Mardi Gras day. Each year native New Orleanians, transplants, and tourists alike watch traditions of the past float down historic streets like Saint Charles Avenue and Canal, connecting with today’s wave of excitement.

The season amplifies New Orleans’ flamboyantly expressive culture. With the glamour of black-tie balls, the melodious blur of marching bands and the seemingly unified screams for beads along every parade route—Mardi Gras creates a gumbo of indulgent entertainment. It’s a season you learn to embrace getting nailed in the face with beads and become eternal allies with folks that have clean bathrooms along each parade route. Mardi Gras is a communion of celebration and choice.

For me, Mardi Gras feels like freedom. Whether a traditionalist or costume exhibitionist, during Mardi Gras season, New Orleans is filled to the brim with purposefully unorganized joy. 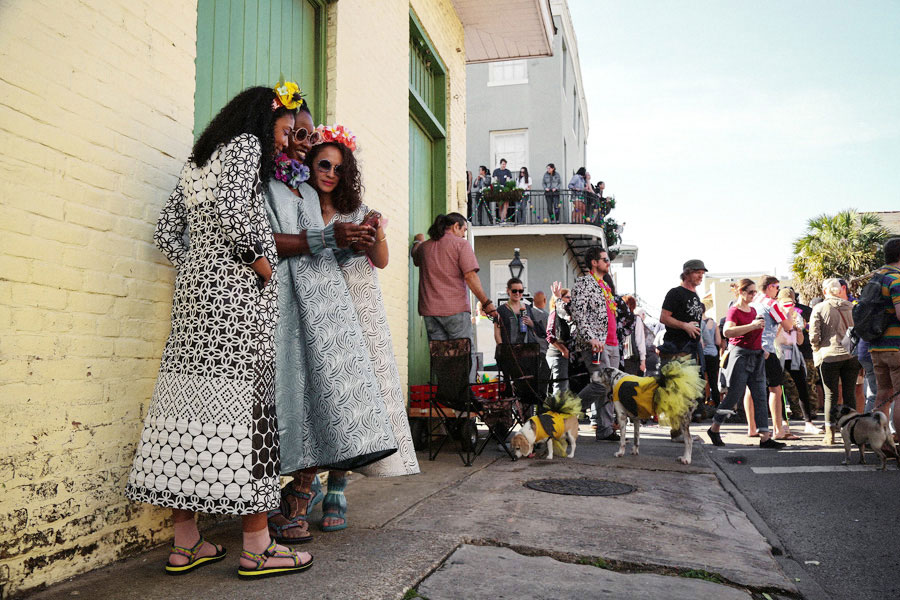 When did you first participate in Mardi Gras and which aspects of the event do you look forward to every year?

My very first experience was in 2004 with my late cousin Steven Mitchell. As a family tradition, I made time to watch two main parades, NOMTOC and Zulu. For years I didn’t embrace the season for everything it could offer. I only went to those two parades for 8 years straight. We met up with the same group, in the same spots every year.

I would not stray away from what had been established as a family tradition. I had no idea that if you allowed yourself enough space, Mardi Gras will loosen your concept of time in which you learn to let go of plans, discover more, and express yourself fully. I wouldn’t change those years for anything, but now I’ve come to appreciate the beauty of uncertainty when celebrating Mardi Gras.

Now, every year without fail, my spirit bursts into a street-dancing, glitter-wearing, driver’s side, shoe-catching, fearless bowl of bliss. It all starts at my best friend Megan’s house for the Thursday night Krewe of Muses parade [a “krewe” is an organization that plans and carries out a ball or parade]. Megan, a costume designer by trade, essentially sets the tone for the peak of Mardi Gras season. The Thursday before all the biggest parades, Megan hosts a Friendsgiving of sorts—with costumes, catfish and her father’s famous jambalaya—all to usher in the spirit of Mardi Gras and offer space to catch a coveted Muses shoe [thrown from the parade float]. 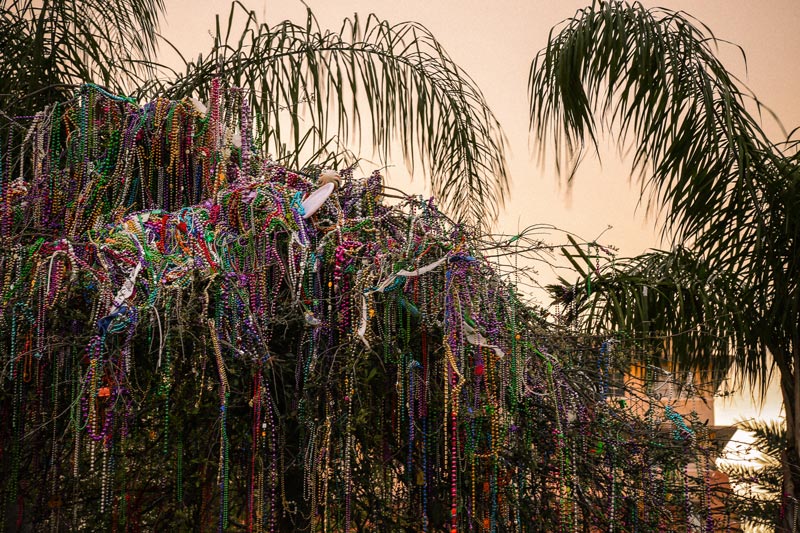 One of the trees in New Orleans dripping in Mardi Gras beads. 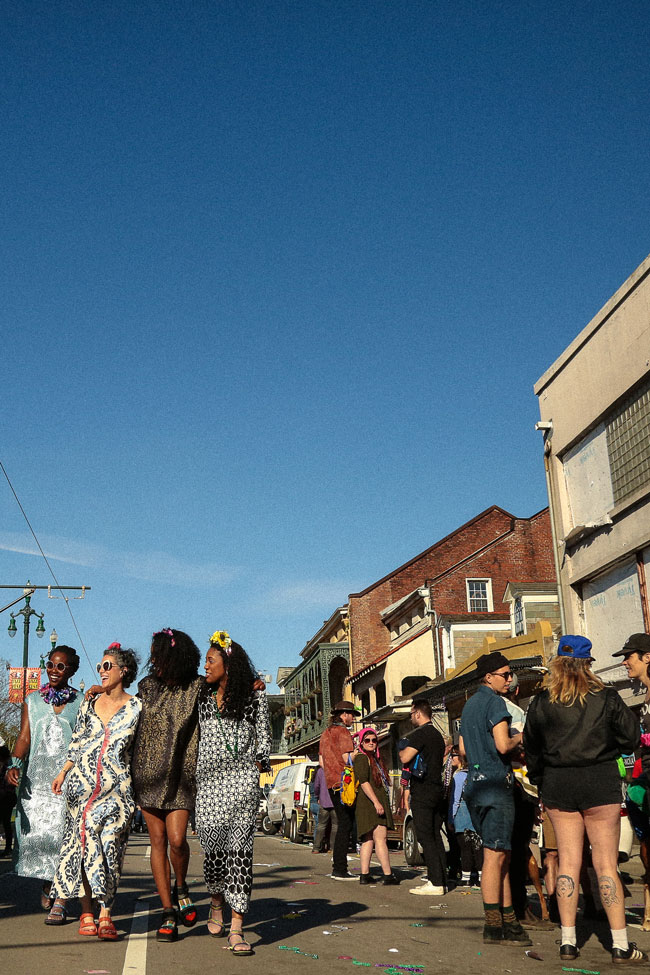 Tell us more about all the parades. What is the story behind them?

The journey to Fat Tuesday is a marathon, not a sprint. This year, I paced myself through the season while seeing all of my favorite parades. Every parade has a signature throw [which is a special item, such as traditional Mardi Gras beads, that is thrown from the floats and into the crowd] and a designated day on which they roll. Some old, some new-ish—all tradition.

I’m a Bachelor Nation-size fan of walking krewes. There’s an exercised togetherness with the official organizers and the folks that come out to see and/or dress in Red Bean costumes. Paraders move through the Marigny and French Quarter neighborhoods with a brass band and marry punny-abstract suits of red bean creative to the movement of every trombone blow. 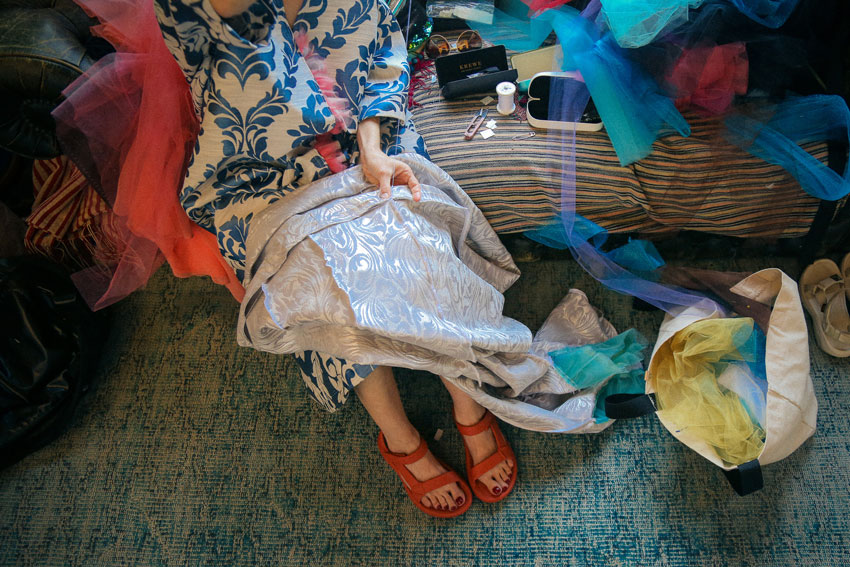 Getting dressed up is half the fun. Whitney and her friends designed and sewed their costumes for Mardi Gras weeks in advance. Pictured: Hurricane Drift in Mango.

Let’s hear all about your costumes! What was the inspiration for the costumes you designed and why?

Mardi Gras is a show of fashion and creativity. Beautiful women and men of all kinds show-out in floor-length gowns at the fanciest krewe balls and hours later will dance the parade routes in crafted garments sewed, painted and glued together. There’s unspoken confidence that beams across the city. I’ve taken this confidence within an everyday costume-casual approach to fashion. This year I wanted to remain true to my daily expression, outfitted in a piece that I would wear any day—and walk the line between fancy and subtle costume. This was ultimately a spacious muumuu. My friends and I donned muumuus of all shapes and textures to parade in the French Quarter.

Tell us about the experience of creating costumes with your friends. How does it feel to come together and create?

This year, for the first time ever I tapped Lu Nicotera to create a parade of muumuus for our krewe to walk the route in a practical way. Lu has the most expansive vintage muumuu collection I’ve ever seen. Her magic closet is draped in original Hawaiian pieces, vintage David Brown, and Stella Fagin dresses. She’s also an extremely talented seamstress. Her New Orleans roots and a stint in New York’s concrete jungle allows for splendor and intention to be positioned in her every stitched manifestation. Lu’s excitement to create a look for any pair of Teva sandals gave life to a day of Mardi Gras confidence for a few incredible women. 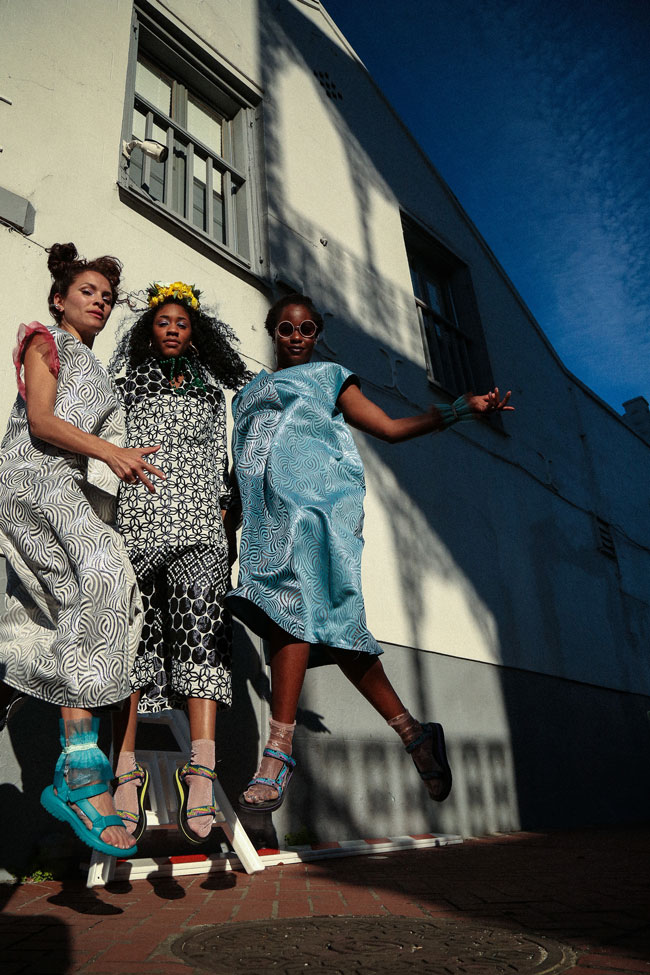 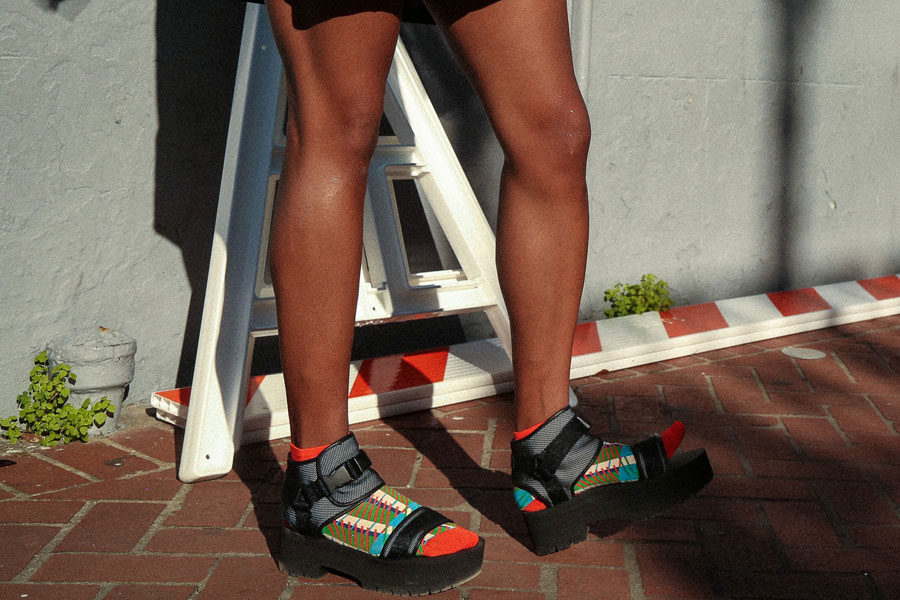 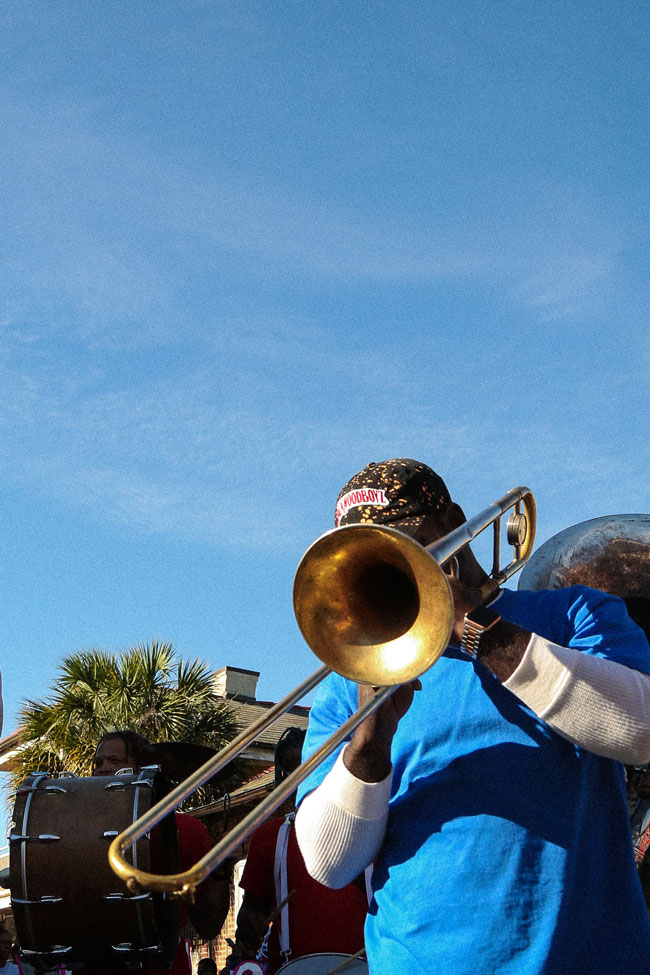 The music of brass bands provides the soundtrack for Mardi Gras parades.

How does Mardi Gras feel like a true community gathering?

Carnival season gets everyone outside no matter their background or socio-economic status. There will forever be a community divide with respects to making parade choices like: neutral ground or sidewalk side, uptown or mid-city parades, green wig or glitter. In addition, there will always be the folks that become a bridge and choose all. New Orleans is a city that knows how to come together for a celebration. It’s in its DNA. 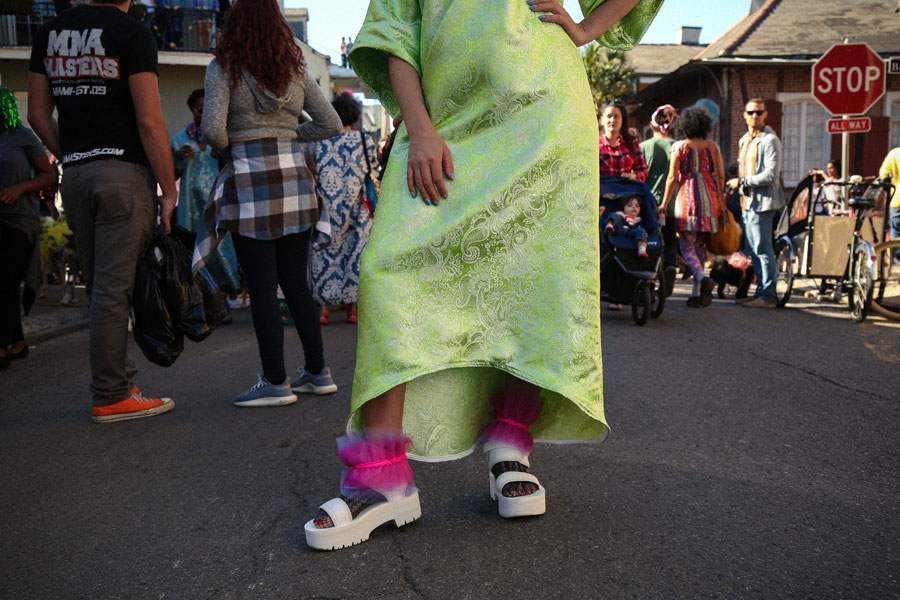 How have you seen the event evolve since your first Mardi Gras?

Tradition in New Orleans is tradition. I’ve seen people evolve around the season. Costumes have gotten more creative and beautiful. The brass bands have stayed the same and that’s perfectly fine with me.

Were there any highlights that stood out to you this year?

This year, the Krewe of Muses parade was my all-time favorite experience. It set the tone for the rest of carnival. It was the first time I had family and friends together costuming and allowing themselves to let go. All of my favorite people were in one place. It felt like freedom. It felt like everything Mardi Gras is supposed to be.

Shop the latest sandal styles featured in this story at TEVA.COM.